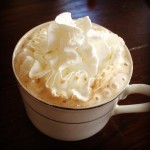 Today, my friends, is a special day.
For each year on September 29, we celebrate the bean.
The bean that makes the grinds.
The grinds that flavor the steam.
The steam that drips into the cup.
The cup that holds the liquid.
The liquid that powers the run.

Now, let me tell you a little story about coffee. I grew up in Bulgaria, where in the late 80s we had “the shortages.” There was a shortage of pretty much everything. Sugar. Oil. Flour. Milk. Gasoline. All these pantry basics slash bare necessities, we could procure only after waiting in long lines on days when the store got a delivery. One day, they’d get sugar and oil: I waited in the line for sugar; my grandma — in the line for oil. The next we’d get toilet paper and beans. (Me: TP; grandma: beans.) Oranges were special. We only got those on New Year’s eve.

But that was not nearly as hard on my family as the shortage of coffee. The beans had disappeared from the store and, unlike all other food products that were at least supplied on a somewhat regular basis, coffee was not.

So my parents, the java addicts that they both were, had to be creative. There was the double-bagging of black tea. Or Inka: the drink made out of ground roasted grains that, served with lots of sugar, tasted somewhat like coffee but was, sadly, caffeine free. And, last but not least, handing me the Thermos and sending me to the cafe across the street: “Run to the cafe and fetch us six espressos, will ya?”

[How the cafes procured their coffee I don’t know. But there was never a lack thereof, properly overpriced.]

I didn’t actually run, but for this surly teenager, the coffee runs quickly become a dreaded chore. Especially on weekends, when I’d have to do it at least three times a day. One day, I just trekked to the cafe, handed over the Thermos and said: “Just fill’er up, as many as will fit.” Fourteen espressos in a Thermos later, my parents’ reaction was one of pleasant surprise. How hadn’t they thought of it earlier?

The end. (Sorry, no funny twist or moral of this story.) But, clearly, my love of (and addiction to) coffee is brewed right into my genes. So yes, today I celebrate coffee with a delicious cup of home-made espresso (San Francisco Organic Rainforest blend, $18 for 3 lb at Costco), and I am grateful that it is always readily available, and in quantities as large as I darn want, whenever I want ’em.

Coffee wakes me up in the morning (and afternoon), and it may even help me live longer, too. And of course, the evidence that for runners, it boosts speed, increases endurance and speeds up recovery.

Not that I’m complaining, but pushing a baby jogger with a 42-pound boy in it is a bitch!

5 thoughts on “Ode to Coffee”