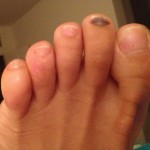 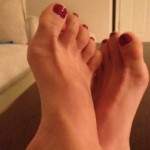 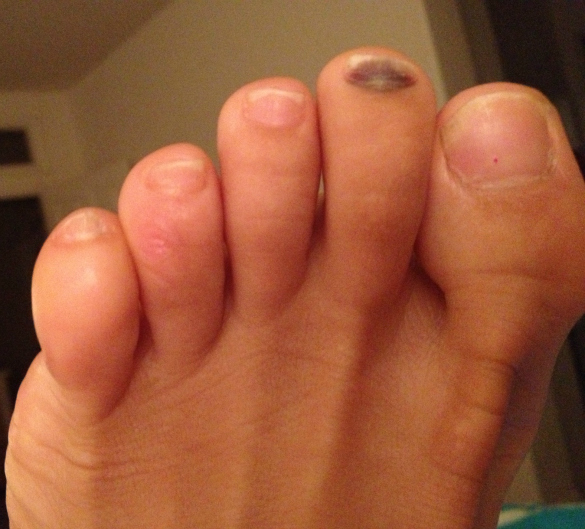 To state the disturbingly obvious, this is a picture of my left foot.

I mean, those are runners’ feet. Granted, mine: after running a few half marathons, a 15-miler, a 14-miler, no biggie. The “Mr. Pinky decided to move out” photo belongs to this guy, who runs marathons or half marathons what seems like every weekend. That is, when he’s not running a 100-miler or four marathons in three days, things of such sort. Endorphin Dude is awesome. Go ahead and like him on Facebook, you won’t regret it. (Just don’t look while eating.)

But as usual, I digress. The point is, today was the day of the footsies. To begin with, I wore my new Tiffany shoes (yes, yes, I know they are Nike, but I’ve gone ahead and named them Tiffany, kay?). We walked around an amusement park all day. Super fun for kids. For adults – you better be wearing comfy shoes. And hey, lucky me, that’s exactly what I was wearing!

Then life improved even further because I went and finally got myself a pedicure. It had been weeks and weeks… and miles, and miles and miles. It was a glorious pedicure, with a hot stone foot massage. Just what the footsies needed. They are so happy right now.

But wait, I digress again. I promise, I really do have lots of insightful thoughts and advice to share about feet.

Needless to say, proper foot care is of critical importance to every runner. When I first started running longer distances, I did not take proper care of my feet. Then my pedicure lady nearly had a heart attack when she saw the calluses I’d managed to produce: I swear those things were so thick, when we got them out I lost a centimeter of height.

So here’s a little bit of what I’ve learned over the years:

1. Socks made of cotton make your toes rotten

OK, I exaggerate. But I’m in a rhyming mood, and I remember the years before “good” socks became mainstream. I was not the only one popping bloody blisters while relaxing on the grass at a long race finish area. Cotton, moisture (from sweat, because yes – the footsies sweat, too!) and relentless pounding to not sit well together.

2. Buy the wrong shoes and you’ll have the (toenail) blues

Always buy from a specialty running store, unless you’ve been measured recently and are ordering the exact same model and model year. And need I remind you that pregnancy makes your feet grow a size? Serious. If you’re just getting back into running after having a baby, go and get measured.

This January, I ordered my usual shoes from Amazon.com and they felt tighter than usual. Did I accidentally order the narrower size? Did Saucony change something about the model? I don’t know. But only two 10-milers later, the black toenails started making an appearance. I suffered through two half marathons before retiring them (so cheap, I know). Once I got sized for new ones, life was good again – I even got my big toenails back!

That said, I have yet to meet a long distance runner who’s never had black toenails, regardless of shoes. That’s you? I require photographic evidence (365 days of foot photos sounds like an awesome project for next year!).

Use it every day. Every day. Maybe, you’ve got baby soft feet, and I hate you. But me: the more I run, the more the skin on my feet thickens and if I don’t scrub it raw regularly… callus attack.

I am also currently in love with this cream. Whoever named it Foot Rehab Cream had clearly been drinking truth potion. It’s probably the Dimethicone (1.1%) that does the trick, but it also smells nice and is not at all heavy or greasy.

4. Give in to the allure of the pedicure

And be totally guilt-free about it, please. Those feet carry you through so many miles. They deserve it. They need it. It’s the cure for the feet (pedi-cure). So there.

But, speaking from experience: do not schedule a pedicure immediately after a long race. It is simply too painful. Do it the week after, and the footsies will thank you.

Right now, mine are so incredibly grateful.

One thought on “Day of the Footsies”