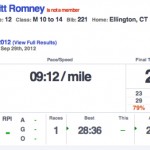 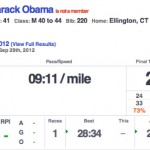 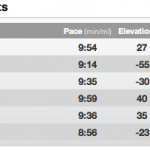 The Paul Ryan Time Calculator. (OK, I had to trow that one in.)

I’m not going to get into the actual politics here — though I will say this: Whichever side you’re on, vote!

But speaking of running, I thought I’d check if President Obama and Mitt Romney have run any races as in, you know: run races. I headed to Athlinks.com and found that, why yes indeed, the duo recently competed in a 5K in Tolland, Conn. Proof: 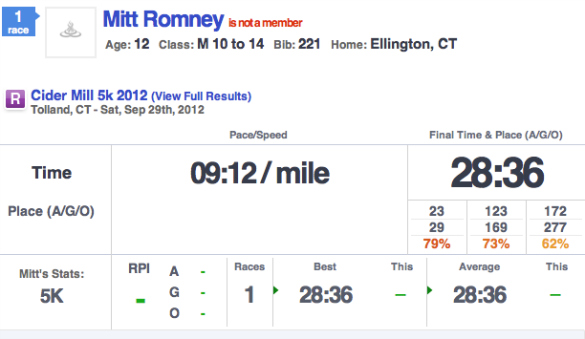 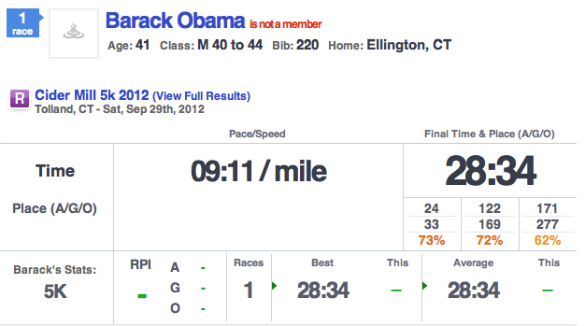 “Obama” beat “Romney” by two seconds, but whether that was intentional, we’ll never know. Unless we track down the duo from Ellington, CT (father and son? uncle and nephew?).

Hey, faux Barack and Mitt, if you see this, drop me a note! Tell me about running together!

In other news, Pro Compression just announced a deal on their Marathon Argyle compression socks (a style they just launched) that I couldn’t resist.

I’ve been loving my calf sleeves (and bought them with a sweet discount deal, too), so I ordered the argyles in pink. Can’t wait to try them!

I won’t be able to run for the next three days, so this was a “binge” run, I guess. Just cram it in there, as much as you can during “runch”! Runch is a new term I learned today from the ladies at Another Mother Runner. It’s a run during lunch. Ha! 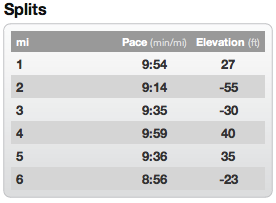