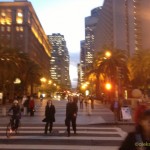 I sweat when I run; profusely so.

When I come back from “runch” and sit at my computer — because what else would you do right away? — sweat runs down my face, chin, arms and legs, and pitter-patters to the floor. Like gentle rain, forming tiny puddles at my feet.

Except, of course, I also reek, so really, it isn’t all that romantic.

But that’s the reality of exercise, isn’t it?

Take it from Dean Karnazes, who talks about sweat in his book 50/50: Secrets I Learned Running 50 Marathons in 50 Days

. (Sweat is but a tiny subject broached among many other useful and inspiring ones, so if you haven’t read the book yet, go forth and do it right away. You’ll thank me later.)

“The body’s primary cooling mechanism while running in the heat is perspiration,” he writes. “The higher your sweat rate, the more heat you can transfer from the core of your body to the environment. Improving your fitness level also improves your sweat response. The fittest runners tend to have the greatest sweating capacity and therefore have the greatest ability to regulate their body temperature while running.”

He should know, seeing how he’s done stuff like run 300+ miles without stopping. I mean, the man ran 50 marathons in 50 days – you got that from the title of his book, I hope. But get this: after he was done with marathon #50, he turned back and ran for another 90 days, covering 1,300 miles, from New York City (marathon #50) to the starting line of marathon #1, in St. Charles, Missouri. Eh… no biggie.

[I met Dean Karnazes once, by the way. Aside from being completely starstruck, I was mainly blown away by the fact that my thigh alone is bigger than his waist. The man does have something like 1.5% body fat. Damn.] 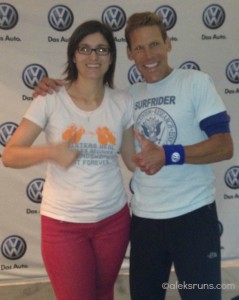 But back to the subject of sweating. It actually came up when I was talking to a coworker yesterday over drinks, and he pronounced: “Oh, I don’t sweat. And even when I do, it doesn’t smell.”

Seeing how this is one of the fittest people I know, I figured he’d just had one too many.

But he insisted it was true.

So when FitCoworker (who, really, is incredibly fit) offered to go for a run during work today, who was I to say no? [The rest of the coworkers were warned to congregate upon FitCoworker upon our return – and smell the roses – while I brought a fresh pack of baby wipes and deodorant to simulate cleaning up before heading to my 2-hour commute back home.]

San Francisco is a beautiful city for running. Cool all summer, pleasantly warm in the fall and winter.

Even though it rained on and off, the late afternoon did not disappoint: slightly chilly, refreshingly breezy. Too bad that other than the occasional race, I don’t get to run in San Francisco. I should fix that.

FitCoworker darted off at a sub-8 minute mile pace, so soon enough I was dragging myself 10 feet behind, trying to somewhat keep up.

By the time we came back, I was dripping. But the man was right. He did not break a sweat.

Do you sweat when you run? How bad is the smell?

4 thoughts on “Breaking a Sweat In San Francisco”