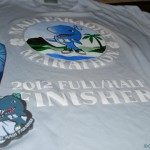 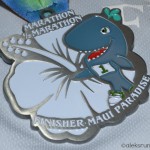 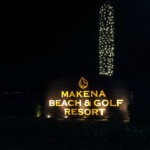 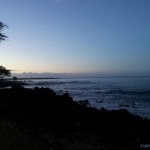 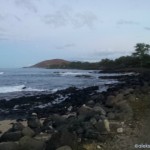 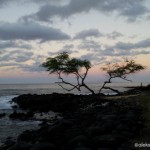 Say you run 13.1 miles on your own, on a course measured by your GPS watch or smartphone app and with not a single spectator or volunteer to cheer you on or offer you water and GU.

Did you run a half marathon?

Yes, you did — if you had registered to run a virtual one.

Virtual races seem to be all the rage these days. Within the last couple of weeks, I’ve heard of at least five. Today, I ran one — and I’ve got the finisher’s medal and T-shirt to prove it: 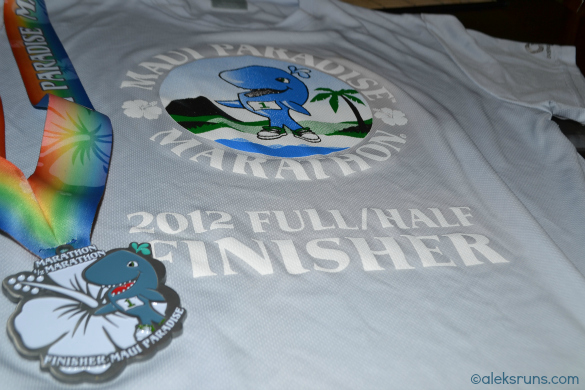 The Maui Paradise Marathon was first held in 2009 as an official, timed race. But the timing for launching an official event wasn’t good. As the economy went from bad to worse, race organizer Jerry Levey scrapped plans for staging consecutive events and reinvented the race as a virtual one: a marathon, and a half. And, he says, people seem to like it this way.

It may just be one of the oldest virtual races — though now that I think of it, that dude Pheidippides also did run from Marathon to Athens on his own, sans spectators and volunteers, and certainly sans GU.

The good news is, participating in a virtual race these days is a lot easier logistically (no battles to fight and we have GU). All you need to do is register, then run.

To register for the Maui Paradise Marathon or Aloha Half Marathon, your actually purchase a one-year membership with Maui Road Runners. Then, whenever you visit the island (within a year of registration), just do your run, track it with a GPS and arrange with Jerry to pick up your T-shirt and medal. 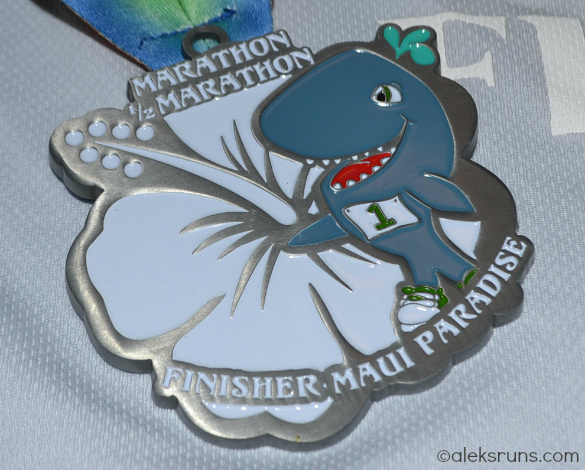 Because this isn’t an official race, you’re on your own when it comes to water, gels and any other support. There are a few suggested routes for each distance, but you can make up your own, too.

It really is no different from a regular training run, so obviously, it doesn’t make much sense to plan this as your first ever marathon or half. If you can time your run with one of four annual club party dates (check the 2013 ones here), you could get together with a small group of like-minded virtual runners to pick up your T-shirt/ medal and have a few celebratory drinks.

I had to skip that part, unfortunately, even though we were on the island during one of those events, because I’ve been under gym arrest and not allowed to run, lest I get a stress fracture in my right foot, just like Brook Lopez.

But I had planned to do this race and there was no way on heaven (literally!) I was going to leave Maui without running.

So this morning’s wake up call was at a pitch-dark 5:00 a.m., and after a delicious cup of Maui Grown Coffee, I grabbed a bottle of water, four PowerGels and a flashlight, and was on my way.

Since one of the two suggested half-marathon courses starts just a 1/2 mile outside our condo, I decided to do that one. And good thing I studied that route in advance, because my RunKeeper’s GPS just refused to grab a good signal, no matter how I tried.

I thought it was because of the darkness, but Jerry later told me that getting a GPS signal is tricky business on most parts of the island.

If you plan to run on Hawaii, on your own, and especially if it’s still dark out, be sure to study your route online first!

I figured, if my GPS doesn’t ever kick in, I’ll just run for 2 hours and 10-15 minutes for good measure. It’s an out-and-back route and I knew the where the turnaround point should be based on the course description.

The first half of my run was illuminated by the resort lights I passed: 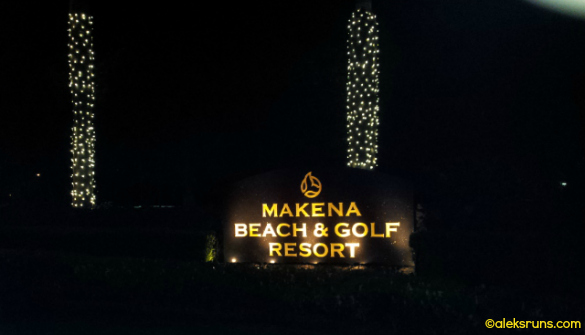 And, for long stretches in between the Wailea resorts and Makena, by nothing but my flashlight. Always bring a flashlight or head lamp when running in the dark!

I should’ve been grateful for that darkness, though. On my way back, running the hills I had already covered — with not much effort! — I was stunned at how brutal they seemed.

Finally, as I approached Ahihi reserve – location of my turn-around point – the sun came up and I was rewarded with the most stunning views.

The ocean was to my right on my way out: 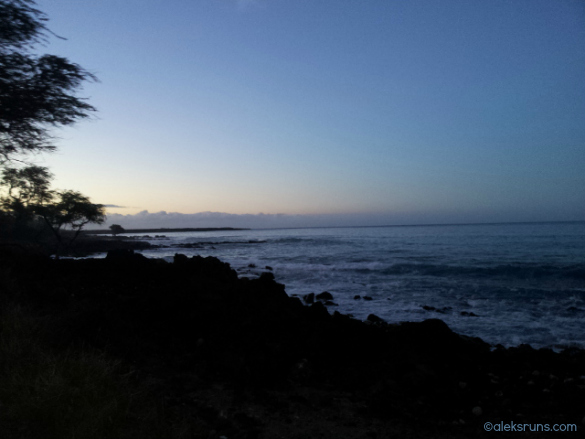 And on my left on the way back: 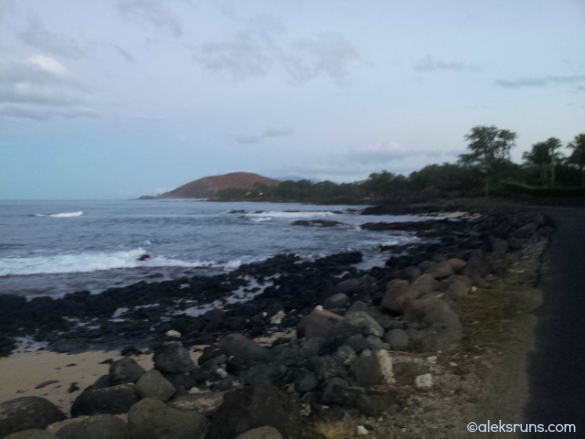 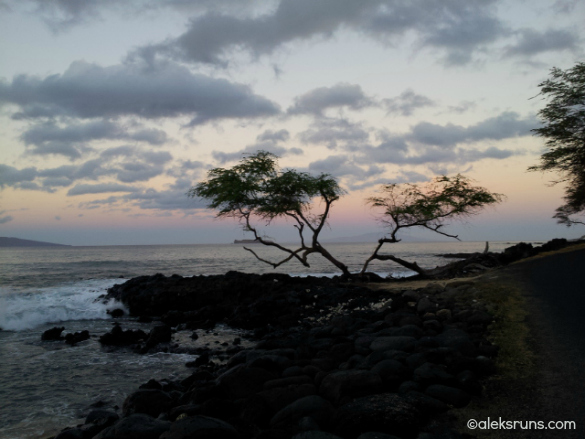 About 1:40 hrs in, a miracle happened and my GPS kicked in. Nothing like hearing “average pace: 62 minute-mile”, really. About 20 minutes after that, the phone’s battery died. Back home, RunKeeper claimed that I did this:

Tech fail all the way. But I was almost done with the run, the sun was out, endorphins all around – no big deal. Jerry was really nice about “accepting” my distance, too: I sent him a photo and told him about my experience in a long email. Surely, I’m the first person ever to do this, yes?

Overall, this was an amazing half marathon, and if we ever come back to Maui, I may do the full one, or try another course for the half. (Oh, and I did it on the day of the official Honolulu Marathon. High five!)

If you’re up for doing a virtual race, here are a few that I’ve come across recently (including one I’ll be doing with my chapter of Moms Runs This Town, with a beautiful medal):

2. Winter Runnerland 2013 5K/ 10K/ Half Marathon by Moms Run This Town (MRTT).
I heard about this race through my local MMRT chapter and plan to do it! Run either of the three distances in January 2013 and report to your local chapter.

3. The Color Vibe 5K, by Vail MRTT.
Another MMRT one. (I’m not sure whether you have to be a member to participate?) Purchase a medal for $10 and run a 5K any time in December!

4. Run Free 2013.
This one takes the cake! It was organized as a Kickstarter campaign and raised a whopping $23,098 from 592 backers. And it’s all fake! What’s expected of participants is to don their race bibs, then medals, on February 2, 2013, and take photos of pretending to run and their friends pretending to cheer. Then send photos to the organizers, who would like to figure out, how many photographs will it take to make a fake marathon real?

If 592 non-runners don’t run 26.2 miles, does that make them non-marathon finishers?

4 thoughts on “A Virtual Race in Paradise”