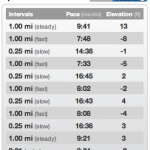 Man, it was foggy this morning. Seriously, we gave San Francisco a good run for their money, look: 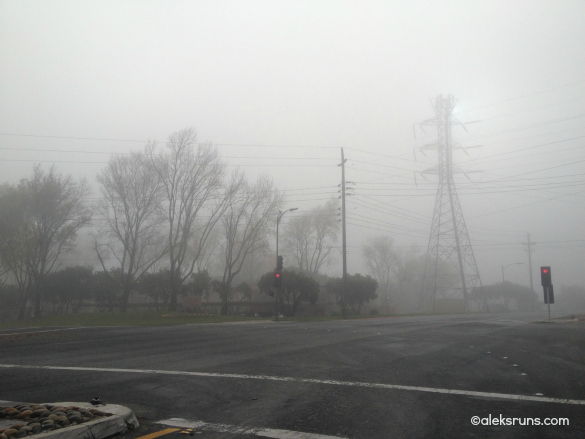 [raise your hand if you, too, take photos while waiting – in the car – at a red light? anyone?]

Thankfully the fog cleared out by mid-morning, because I’d been dreading my workout well enough, no need to add gloomy weather to it.

I had to do mile repeats today. Aaah. The hardest.

First, let’s define mile repeats. Some call them an interval workout, others: a tempo run. To me, they’re kind of both… but also neither.

With intervals, you push the pace – way, way past your comfort zone – for a certain period of time (one to four minutes, usually) or distance (anywhere from 200 meters, or half a track lap, to 800 m/ two laps); take a short break; repeat.

With tempo runs, you push the pace – past your comfort zone, but not that far past it – for a few miles. You simply can’t sprint or run as fast as you do during intervals, because you’ve got to keep going at it for a while.

Both types of workouts are usually sandwiched between a good warmup and cool down: those ain’t no easy runs, so do what you can to prevent injury.

Now, back to mile repeats. You push the pace for a mile, then take a short walk/ slow run break (a quarter mile or three to four minutes). Repeat.

To me, that’s not really an intervals workout because a mile is long. But it isn’t a tempo run either, because – well, it’s just a mile, repeated several times.

See? Neither here nor there. And, worth saying again: very, very difficult; physically and psychologically.

But, as with any dreadful workout, once you’re done (and have kicked its behind quite so, if I may add) — the feelings of satisfaction, accomplishment and general bad-assery are all that much stronger!

Your turn: what’s the hardest workout you do, run or other?

One-mile warmup at an easy pace, followed by four times one-mile repeats and 0.25-mile walk in between; cool down for 1.4 miles.

Should be noted, the first two mile repeats were on a road; the second two: on a trail/ dirt path surface. I’ll use that as my excuse for slowing down[COUGH]. 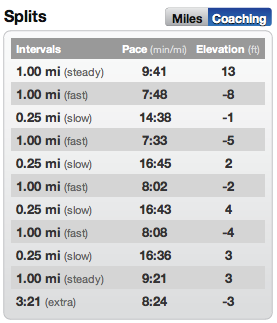 2 thoughts on “The Hardest Workout”