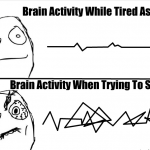 More than anything, this is the week of rest and sleep. Lots and lots of sleep.

Many runners can’t sleep well the night before a race, yours truly included. That’s perfectly normal. Your body is finally rested, but the same can’t be said about your brain, which is all excited and nervous about the big day:

Not to worry, though. You probably know that when it comes to sleeping before a race, it’s the night before the night before that’s most important. And, in general, if you’ve rested enough and slept well the week leading up to the race, your performance won’t suffer if you sleep little or badly the night before.

Don’t take my word for it, though, listen to the experts:

From this article in Runner’s World.

So even though I skipped not one, but two early-morning workouts in the past three days, I don’t feel any guilt whatsoever. I’m focusing on my training, guys!

Speaking of training: my big dilemma is whether or not to do the TRX/ conditioning workout with my tri peeps tomorrow. I’m leaning towards not, but we’ll see.

This last week calls for very little running: 4 miles today, 3 on Tuesday, 3 on Thursday. What?!?

It’ll be the week of running withdrawal… but hopefully one of sleeping well!

Easy run, last two miles were supposed to be “at race pace” but since I never really set an official time goal or race pace, I just picked it up a little. (Well, I sort of have a “hope for” and “dream of” goal, but we can talk about those later.) 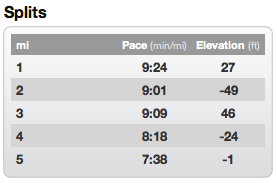 One thought on “Banking on Sleep”