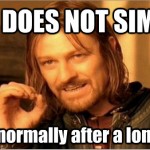 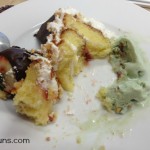 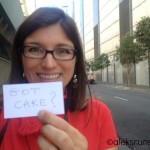 Runners often talk about battling the pre-race jitters . But what about the post race funk?

Melanie from our MRTT group brought this up recently and called it the post-race “crash.” That’s pretty darn accurate, considering what happens to your body the week after a tough race. 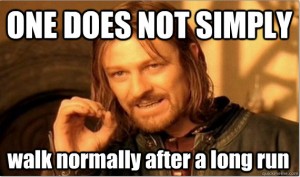 [Not that you’re asking, but ever since Sunday’s Rock ‘n’ Roll San Francisco half marathon, I’ve been promptly collapsing each night at 9 o’clock, hence my absence here — did you miss me???]

But Melanie was talking about the “other” crash – the one in your head. The build-up to the race is gone, the race-day excitement and post-race festivities are behind you; the medal and race bib are stashed away in the box…

… How are how are you supposed to annoy your Facebook friends and the Twitterverse now??

Do nothing, and before you know it one of these:

Will turn into this:

And don’t get me wrong, cake is delicious — but we all know where it will all go unless you get your butt back into the game. So cake aside, here’s how I combat the post-race-partum depression.

1. Sign up for another race ASAP. My race calendar is filled up with at least one race every two-three weeks, to ensure that I always have something to look forward to — and a reason to keep training [and over-sharing]!

2. Challenge the body — and mind. Your next event? The more challenging, the better! I’ve been running half marathons for years and lately, I’m noticing that I don’t feel the adrenaline rush I used to get when they were new, exciting (and seemingly so much longer). So I’m keeping things fresh with new distances (a couple of marathons this year, an 18-mile race next month) and challenges, like my first triathlon next Saturday! I guarantee I will not be able to sleep before that one!

3. Lean on your support network. I am so lucky to be part of the San Jose chapter of Moms Run This Town: a group of amazing women, with a fearless leader Irma, who comes up with all kinds of ways to keep us sweating! This week, for example, she has challenged us to post a photo of ourselves post-workout, with a slogan that is our inspirational matra for the day. Each photo gets you a raffle entry, for all kinds of cool prizes to be won today at the chapter’s 1-year anniversary party! 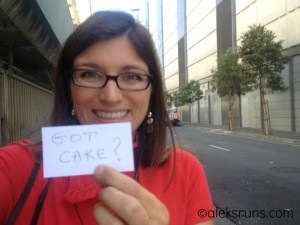 Wait… I think I got the assignment wrong?

4. Crosstrain. I don’t know about you, but my legs are pretty shot after a race (especially an all-out or PR one). And, I sometimes just want to take a break — from running. Shock! But with another event a few weeks away, I don’t want to just splat myself on the couch and go all flabby and stuff. So: cross training to the rescue. This week, I’ve done almost no running, but plenty of swimming and biking. Rest assured, those running shoes won’t feel neglected for a week or two – but you may feel way more excited to be lacing up after a short break!

Now your turn: How do you combat the post-race funk?

Workouts:
Wednesday: walked about four-five miles, then had cake. What what?

Lunchtime bike ride with some nice climbs thrown in [should not have eaten said lunch before I headed out, but all ended well].

Rode to the train station, pretty uneventfully on the way there (except the part where I missed the train by one minute; oh well). On the way back, I did the deed that, I am told, every single cyclist has done at least once: did not unclip on time at a red light and toppled over like a boss! Does that make me a real cyclist now?