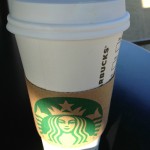 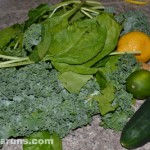 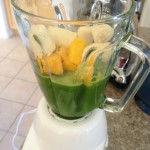 So I didn’t want to say anything for fear of being accused of first-world-problemism, but our juicer was broken for 10 days!

It was tough. Like coffee, I guess drinking freshly masticated juice can be addictive. In fact, I realized, the days without juice were ones with more of this: 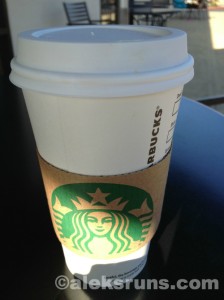 The good news was, our juicer

was only three months of age and thus under warranty (15 years, they say? I don’t believe it).

So anyway, yesterday the replacement part arrived and I had to immediately make the highest vitamin-content concoction I could think of — and so you have, the Mean Green Tropical Smoothie: 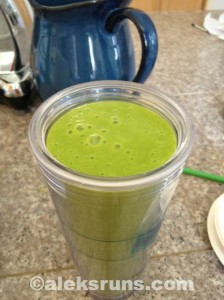 Yes. First I juiced. Then I blended. It’s super easy, so I’ll tell you how to make it and see for yourself how delicious it is!

Step 1: Make some Mean Green juice
Use whatever leafy greens are in your fridge, a lemon and a green apple or two. 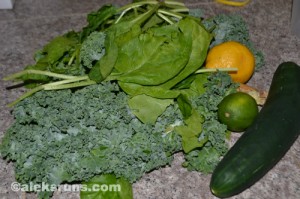 Step 2: Blend with some frozen pineapple, mango and a fresh banana

I got the idea from the juice bar at a local Whole Foods, actually, where they make a kale-pineapple-mango smoothie and it tastes great. Instead of juicing the greens, they throw all the ingredients in the blender with some ice – and there you go. This is a great option if you don’t have a juicer – but do have a good, powerful blender (which ours isn’t, as you can see from the photos).

The taste is not-too-sweet, but kind of salady-fresh because of all the green stuff. I really liked it. Then I tried to make another batch, but used one apple instead of two and a few strawberries instead of mango… and meh. Not so good. So depending on your taste, it might be a trial-and-error sort of thing.

On Monday, swam 2 miles in 1:17. That means I could do an Ironman swim within the 2:20 hr limit, possibly hopefully maybe, one day? Nice to know that there’s hope, even for a sucky swimmer like myself.

Anyone cook/ juice/ blend anything yummy these days?