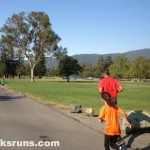 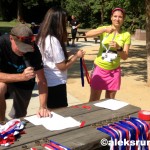 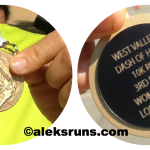 I exaggerate, of course.

I ran a 10K today and dominated over my previous PR at the distance. Does that count?

The West Valley Dash of Hope is a local, fairly small 5K/ 10K race at the beautiful Vasona Lake Park in Los Gatos, Calif. And by “beautiful” I mean beautifully located not even four miles from where we live. [I was officially “taking a break” from races this month, but with one that conveniently close – and short – how to say no?]

Bonus: with an 8:30 a.m. start, we didn’t have to leave the house until 7:45! Then, of course, we parked too far from the actual race start and the mile-long walk almost made me late. As usual.

There were two distances – 5K and 10K – and maybe a couple hundred people for both (I’m still waiting for the official results to be posted so I can get all the data intel). Everyone started together. I have no photos of that (shock!), what with almost being late and having little to no time for my usual two bathroom trips.

[Another plus: no stinky porta-potties here; actual bathrooms!]

Good thing, then, that the race started a bit late: 8:34, according to my watch. I had lined up very near the front and quickly found myself falling behind the leaders (doh!)… and being passed by two tiny girls. They couldn’t have been older than seven or eight?

And mind you, it wasn’t like I was dawdling. My Garmin said my first mile was a 7:55 pace – that worried me a little, actually, because I know there is no way I can keep that pace for six miles.

Unless Ryan Gosling paces me. I think?

Wait, what were we talking about? Oh yeah, the race.

As usual, yours truly did her thing and studied the elevation chart carefully pre-race. Seriously. Elevation charts are your best friends. Get up close and personal with ’em before each race, especially if you can’t run the course ahead of time.

In this case, I knew the race started with a downhill (it looks tiny here, but it was pretty awesome), then continues pretty flat until about mile three, then a mile of a delicious gradual descent — but then you turn around and have to climb that back almost the whole way until the finish.

So basically, I knew that if I wanted to break my PR today, I’d have to book some fast miles in the beginning. Because… let’s look at that elevation chart again:

Now, here’s the thing: my Garmin says the total distance was 5:99. I kinda trust my Garmin to be accurate, but you never know? My friend used Strava on her phone, and it came in at 6.2 miles precisely.

Whichever, I crossed the Finish at 49:58. That’s 2 minutes 28 seconds faster than my previous one, so I’ll take it! It turned out that I took third in my age group, too: always nice to get a little something-something (especially considering the race didn’t have finishers’ medals, and the one I got I actually earned): 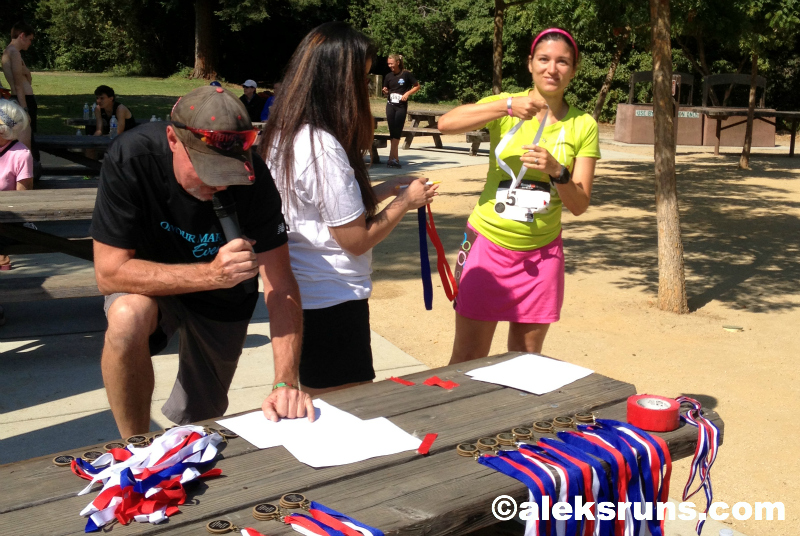 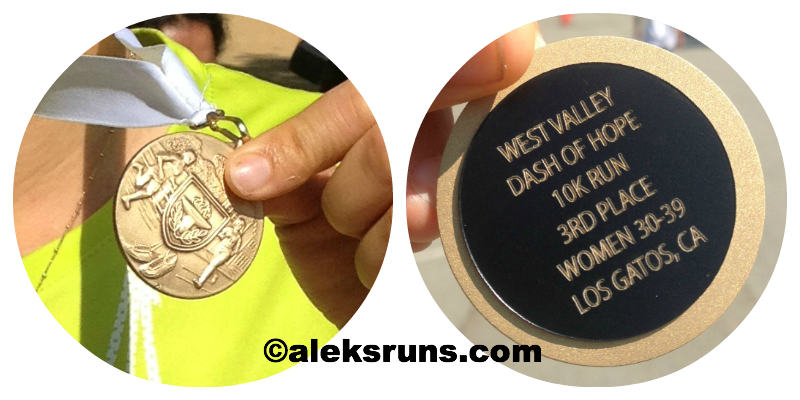 But, of course, there will be two things nagging at me, until at least the next PR:

1. Was that course really short? And

Overall: If you’re looking for a local race without much fanfare – no finisher medals and a cotton T-shirt (how spoiled we’ve become, with all those dri-wick shirts, haven’t we?) – give the West Valley Dash of Hope a try next year. The course is fast and (almost) flat, there is more than enough food for everyone (the volunteers were walking around with boxes of bananas, power bars and kombucha tea, urging people to take as many as they like), and it’s all for a great cause, benefitting hunger and homeless services provided by West Valley Community Services. I’ll be back next year, trying to shave off those pesky six seconds – or more!