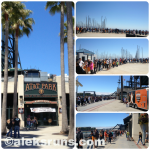 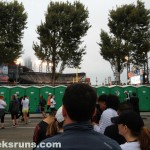 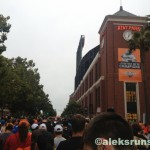 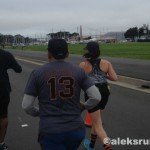 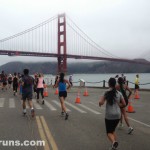 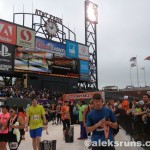 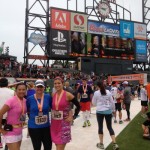 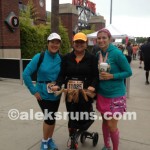 I’ve only been at AT&T Park four times and all four were to cross the Finish line of the Giant Race. (I could care less about baseball – Don’t hate, I’m European! – but I do love running.) I came across the Giant Race when we moved to the Bay Area in 2010. That happened to be its inaugural year, and I signed up for the 5K to test the waters. Next year, I ran the 10K; then in 2012 I did the half.

It became one of my favorite races: great weather in San Francisco at this time of year, relatively flat course, lots of people and a fun, fun finish inside the ballpark.

If you are a SF Giants fan, do this race at all cost. This if your chance to take the family to your hallowed ground and hang out there for a few hours, enjoying the views in the company of fellow baseball fans.

Here’s how my SF Giant half marathon went down this year:

Exactly what it looks like. The Expo was in the park this year and the line to get in was – no better way to put it – Giant. I waited for more than an hour, largely because they opened half an hour later than planned because of a technical problem. And according to the Race’s official Facebook updates (kudos for making those frequent, by the way), the backup lasted all day. They did say they stayed open an hour later than planned, though.

On Saturday, the average wait was a bit better, 15 to 30 minutes, but still: a completely avoidable snag, had the organizers picked a larger venue and had more volunteers to hand out bibs. 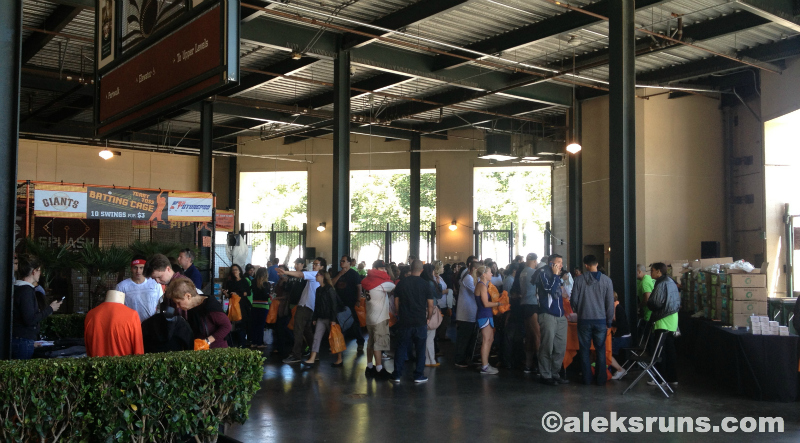 With 20,000 runners, you really shouldn’t be counting on four to five volunteers for the 10K/ half marathon, and another four or five for the 5K. Just saying.

And because the wait took up all (and then some) of my planned lunch break, I picked up my bib and dashed out ASAP. No time to walk around the vendors and buy merch. Looked like many of my fellow runners-in-waiting did the same.

On the bright side, things from now on could only improve?

And improve they did!

I rode into the city with two friends and, with prepaid parking, we hardly hit any traffic coming into the designated parking lot. Last year, I remember waiting in a forever-long and painfully slow-going line to park. Note to self: next year, buy the parking ticket in advance!

By 6:30, we were all ready to go and headed towards the start… only to see insanely long porta-potty lines, everywhere. You know how they say there are never enough porta-potties at races? Most definitely true.

With 15 minutes to go and the race announcer encouraging everyone to head towards their corral, I became what you would call pee-plexed:

Oh, who am I kidding. There was no pee-plexion whatsoever. I had to go. So I lined up, and waited. And waited… Many nervous minutes later:

Yup. Still waiting. At least the view was kinda nice. (I mean, who doesn’t enjoy a line of green porta-johns?)

I made it to the corrals as the official countdown was happening. Not my corral, which was probably several thousand people ahead:

See that tiny little thing far out? The Start.

It took me more than six minutes to cross that line, and once I did, there was a lot of zig-zagging and general slowness because of the crowds. I was forced to slow down: maybe a good thing, maybe not. I tell myself this is where I lost at least a minute at the expense of at least .10 miles of zig-zag. Passing people in a race is a good morale booster, but when you’re at mile five and still passing people… you know you started too far back. 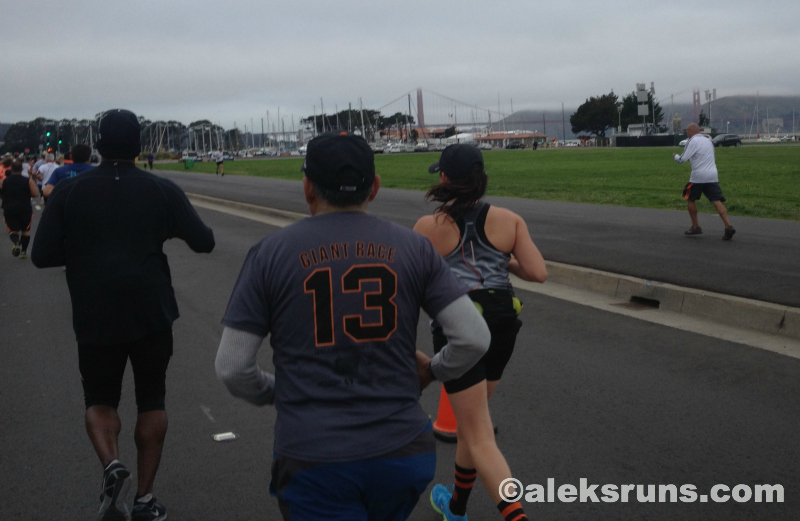 Oh, hello there, lady bridge! Always nice to see you!

One of my favorite parts of this race: running at least two miles with a view of the Golden Gate bridge.

If only I could have stopped myself from taking a gazillion photos of it, I could’ve possibly shaved another few seconds here and there.

After the turnaround, you run on gravel for a couple of miles. Am I the only one who finds this more difficult than running on asphalt? I couldn’t wait to get back on the road, which we did after one last climb in the Presidio (man, did it seem brutal, though in reality it was nowhere nearly as bad as the climbs in the SF Rock ‘n Roll half).

After mile 8, I started feeling the fatigue in those legs – I guess a 25-mile bike ride and an hour of swimming the day before will do that to you.

I had only two thoughts in my head by now:

Soon enough, I did:

Love this finish line! The colors (primarily orange), the announcer trying to pronounce your name as you cross (unsuccessfully, in my case — poor fellow, my last name is quite the tongue twister), the medal… I didn’t show you the medal yet, did I? 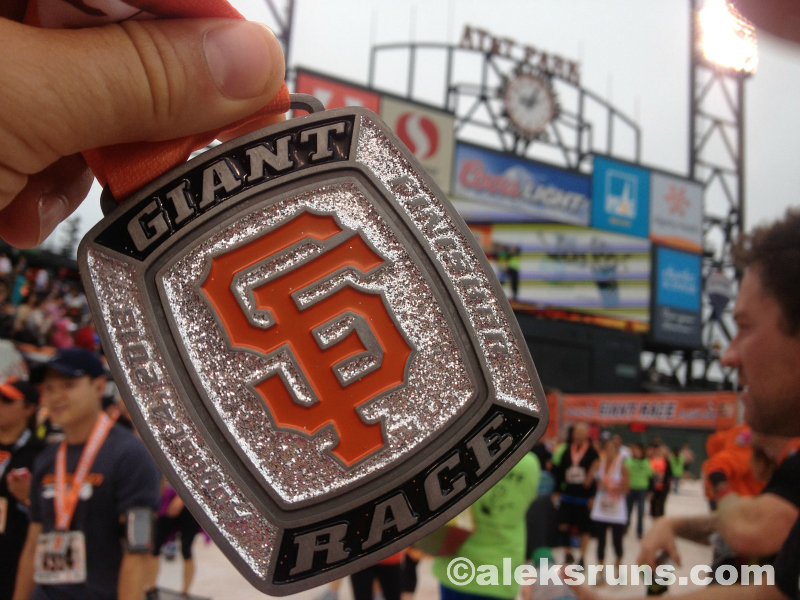 Talk about bling! And yes, this is one Giant-sized championship ring. Appropriate!

Official time: 1:56:51
[Only 53 seconds slower than my PR earlier this year. I can’t say I don’t wish I had beaten it. But given the circumstances? I’ll take it!]

Once I had my medal, water and food (plenty to go around this year!), I glued myself near the finish to wait for my friends to cross. Froze my butt off a little – it was chilly this year! – but it was well worth it!

We hung around the park a little, stretched on the grass (so nice!), and headed back to the car. Finally, a jacket and dry shirt!

A brief Starbucks stop later (not really, it was packed with runners!), I made my way back to the ballpark to meet my family for the kids run. But not before stopping to take a photo of all the 5K runners lined up for their race, which started at 11 a.m. Four hours after the half marathon start… are you thinking what I’m thinking?? 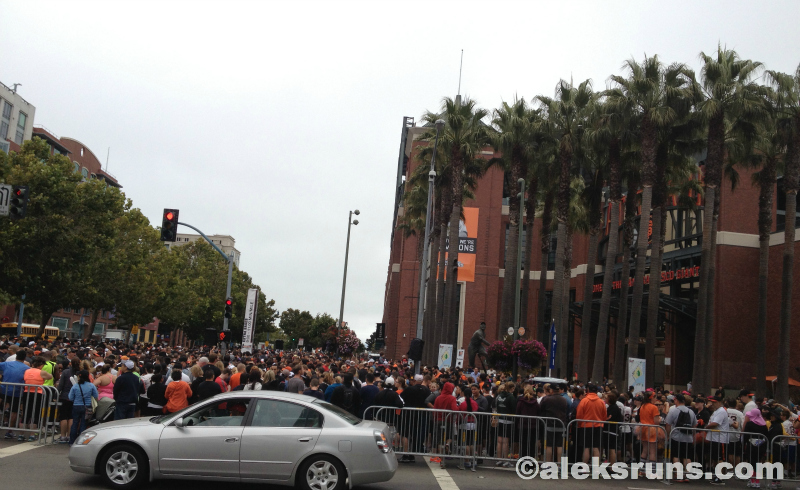 We didn’t get to watch the Kids’ Run, after all. KidRuns was very adamantly anti-running that day and cried and cried and cried, refusing to partake. Tears were shed 🙂 Oh well. We figured, it wasn’t his day and by 11:30 were back in the car. He felt asleep almost immediately, so I guess someone was just very, very tired. There’s always next year!

And before I leave you (with the promise to keep coming back to this race every year, as long as I live in the area), one last thing to share.

Some 20,000 people ran the race this year. We all got our Giant bling, though just six of us technically won first place (male/ female in each of the three distances). But let me tell you about two runners who – both! – take first place for courage, perseverance and GIANT heart:

I ran into Erin (left) and Rocio (middle), friends from the SJ chapter of Moms Run This Town, on my way back into the park. Despite suffering pretty serious foot injuries – Rocio’s left foot is in a boot and the only way for her to walk longer distances is with this scooter, where she rests her knee, and Erin has yet to get clearance from the podiatrist to run – they decided to get out there and walk the 5K.

It took an hour and 13 minutes of walk-limp-rolling, but they beat the sweeper vehicle and walked into that stadium proud! That is a true runner’s spirit. I read about their experience later that evening and was inspired a thousand times more than watching the winner of the 5K zoom through the Finish in 16 minutes 38 seconds. And so to anyone who spent their weekend on the couch at home… what was your excuse?

Congrats to Erin, Rocio and everyone else who ran the 5K, 10K and half marathon this weekend!

6 thoughts on “The San Francisco Giant Race: Half Marathon Recap”