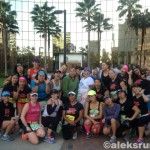 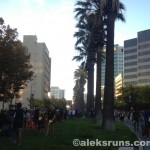 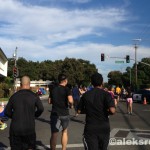 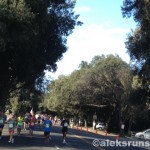 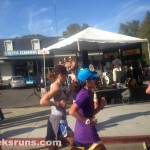 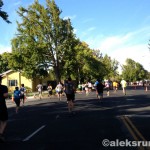 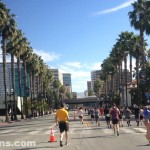 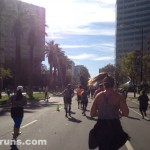 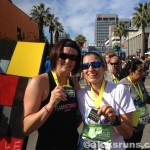 The San Jose Rock’n’Roll course was made for PR-ing. It’s flat, fast and not particularly pretty (read: you won’t be distracted by beautiful or even mildly interesting sights).

I’ve run it every year for the past four years and I did PR there last year, breaking two hours for the first time in eight years. (Beating your 20-something pre-kids self by three seconds: priceless!)

This year, though, I packed just a tad too much fun in the weeks leading up to SJ RnR: Ragnar two weeks out, the Santa Cruz Triathlon a week before, and the See Jane Run Triathlon the day before the race. There would be no PR-ing in 2013.

So I might as well have fun with it, right? And so I did! 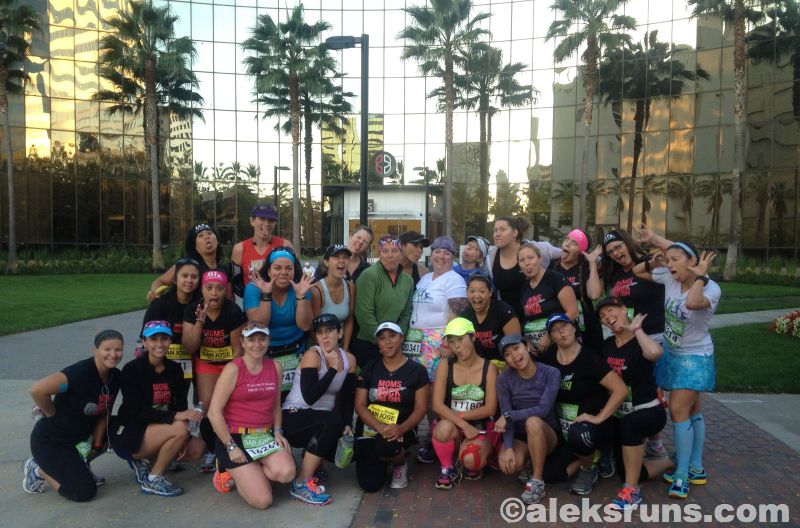 (Ever wonder what a large gathering of mothers do when they get some time away from the kids? This.)

I headed to my corral with plenty of time to spare — not running late; not waiting in a mile-long porta-potty line as the starting gun sounds: a first! 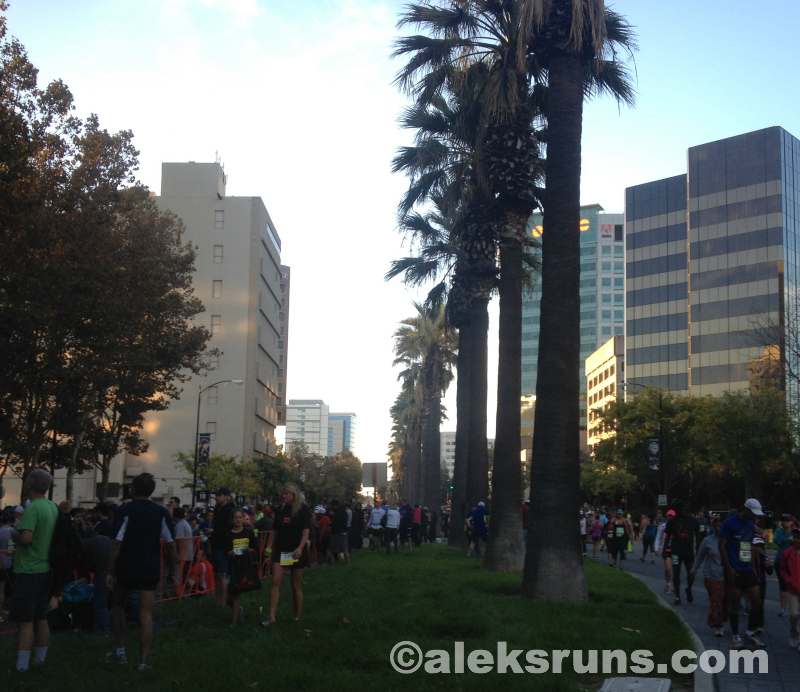 And what do you know, I ran into my Ragnar team-mate Jessica. A friend, in my corral? This day was getting better and better.

It got best when Mallory, another Ragnar team-mate, joined us. Party time!

We got started… and as usual, I was very careful and watching my every step. Not! Barely half a mile into it, I stepped on a bump in the road and snap: sprained ankle again. The same one. Poor limb, it’s been sprained and pounded on in the last three weeks like my purpose in life is to destroy it. (It’s also very common, when you’re running on an injured ankle, to reinjure it, simply because the ligaments and muscles are weaker. You see, I am now the expert on sprained ankles; ask me anything.)

But a little skip-hopping and a number of unspeakable words later, I was actually able to run through it and carry on for the rest of the race with no pain.

We ran our first mile at 9:20: adjusting for a crowded start and ankle spraining, a pretty good pace. Our second mile was an 8:56, and in hindsight, that was probably too fast. We should’ve been more conservative in the beginning to help Jess keep her strength, and an average 9:09 pace (2 hours) for the whole thing.

I was feeling awesome at our pace, though – mile three was 9:42 (potty stop) and mile four, 9:18 – so I figured I might as well take a bunch of photos. Though I should say it again, this course isn’t particularly scenic:

I have no idea what I’ve photographed and where it was, but it’s basically all the same. You either run through downtown restaurants/ shops, cleaners, laundromats, car washes and gas stations, or quiet residential areas.

And for the first time ever at this race, I heard the bands! I always run with my Spotify playlists, in my own zone of suffering, so the fact that this is a Rock’n’Roll race doesn’t really register. This time, though, it did – and it was so much fun! There was a band at every mile, and they all played cool stuff – Eye of the Tiger was heard a few times, and all that! 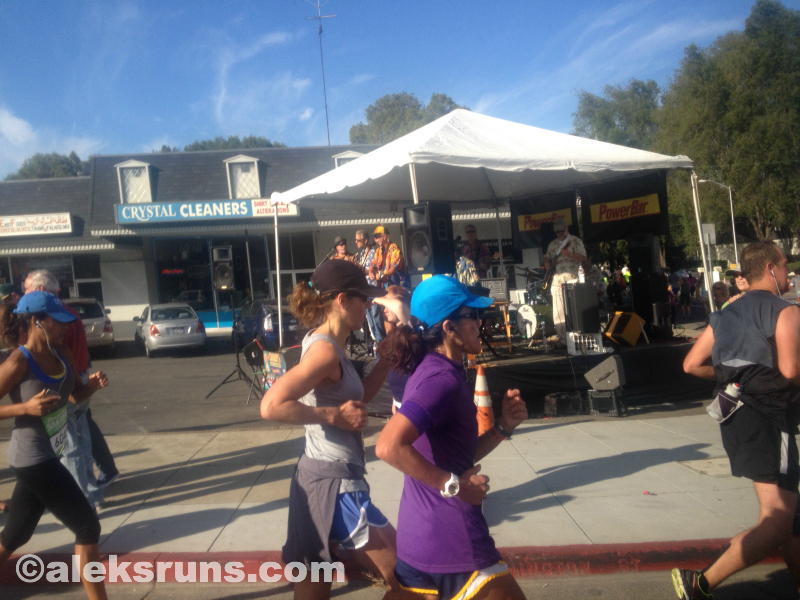 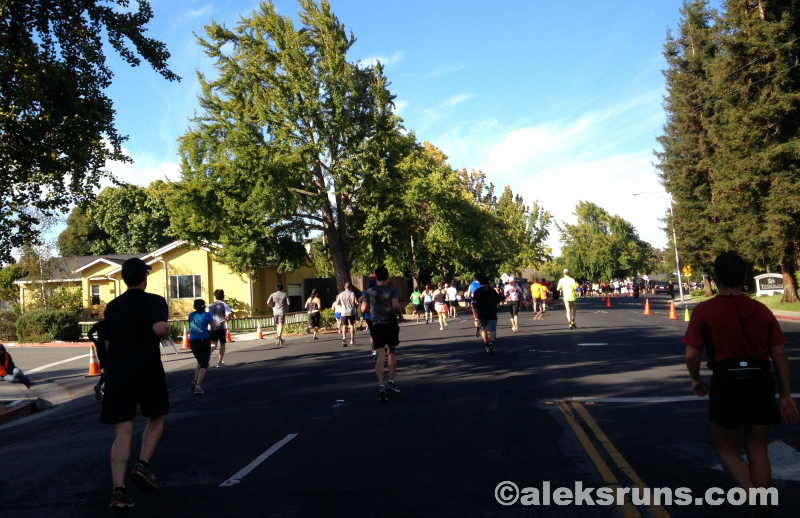 Ironically, I don’t have a single photo of the Rose Garden neighborhood, which is one of the few really pretty areas along the course. Huge, beautiful homes lined up perfectly on each side, manicured front yards — a great distraction from the fact that you’re at mile 8 of a half marathon and have five more to go.

Only five, though! Only four! Just three-point-one miles, that’s a 5K! I kept talking to Jess as we were slowing down, now in the 10+ min-miles, taking walk breaks and potty breaks, but I’m thinking my “encouragement” may have been more of an annoyance? (She’s too nice and won’t ever tell me if it was!)

At around mile 11 or 12, we ran by our own MRTT San Jose cheer squad, and that was pretty awesome. Thank you, ladies!

And then we came to the last mile of the race. For years, I have hated that straight, seemingly endless stretch of road, hated it with such passion that I never really noticed…

… it’s actually very pretty there, with the palm trees and blue skies, and sunshine reflecting off the glass-and-steel tall buildings and all that. 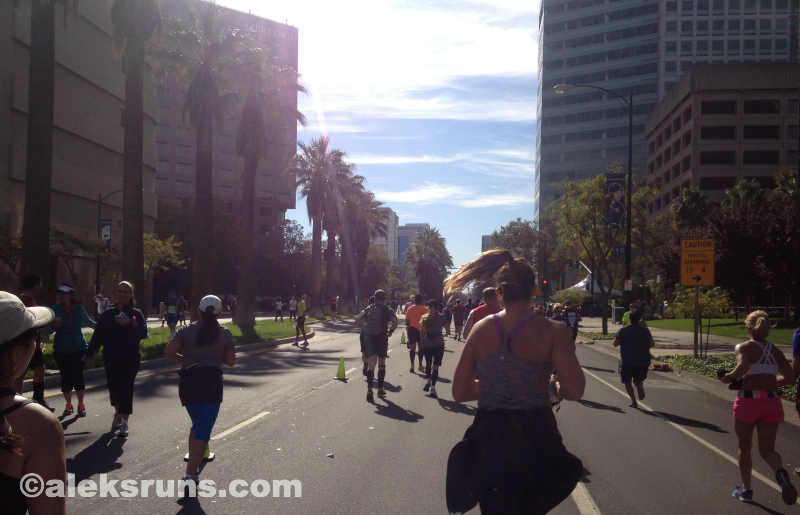 We saw the Finish line and Jess gave it one brave, last push, and we were home. Mallory had stopped at a porta-potty line and crossed just a few minutes later. 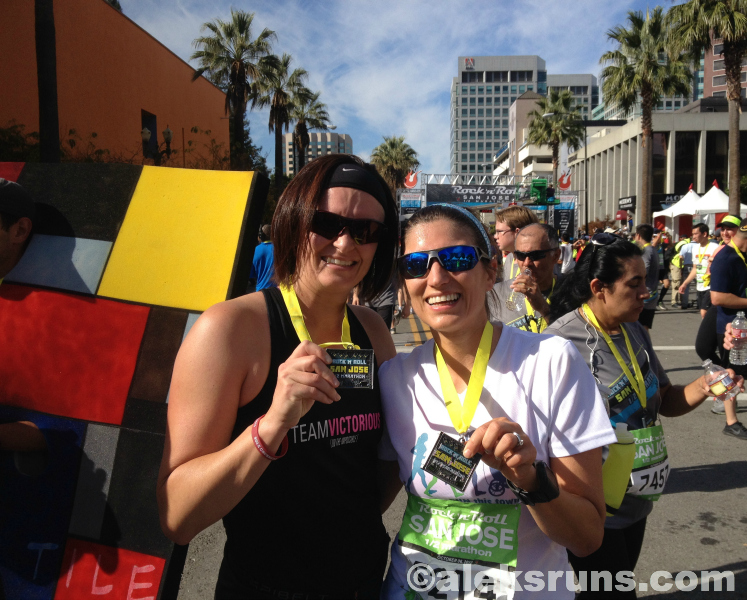 Sometimes, it really pays to forget about time goals and PRs (yours, at least) – and just run a race with friends.

(And no, we couldn’t give Jess that PR, but I’m pretty sure she’ll get it in just a few short weeks, at her next race!)

As for the bling, it’s the usual heavy metal: 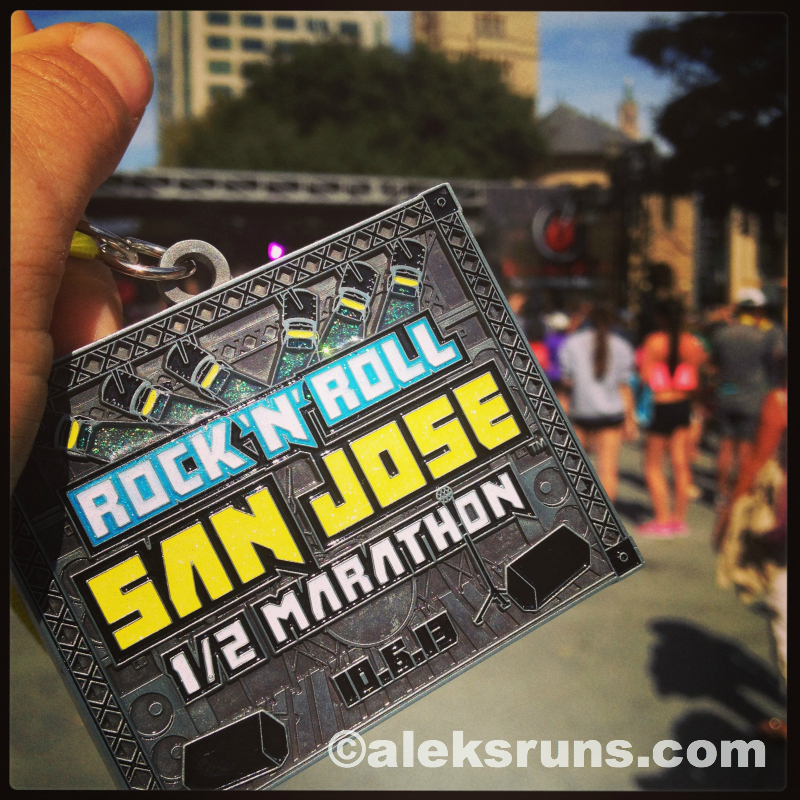 You see what I did there? Ha!

Have you ever run a race for fun or with a group of friends? Did you like it?

3 thoughts on “San Jose Rock’n’Roll Half Marathon: Better With Friends”