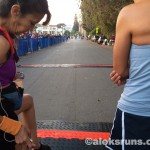 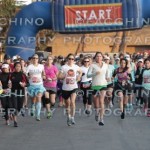 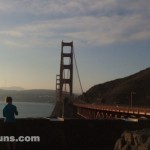 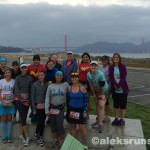 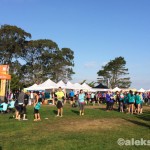 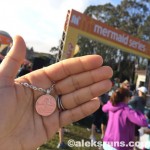 To think I very nearly didn’t register for the Mermaid Run San Francisco, if not for a very attractive discount posted at some point on their Facebook page. (Seriously, you must “Like” your local races’ Facebook pages if you want to get sweet deals and giveaways. Chances are, you’ll never pay full price for a race, ever again!)

Scheduled on the weekend after the US Half marathon and with a very similar route, I thought, Do I really need to do the same thing two weeks in a row? 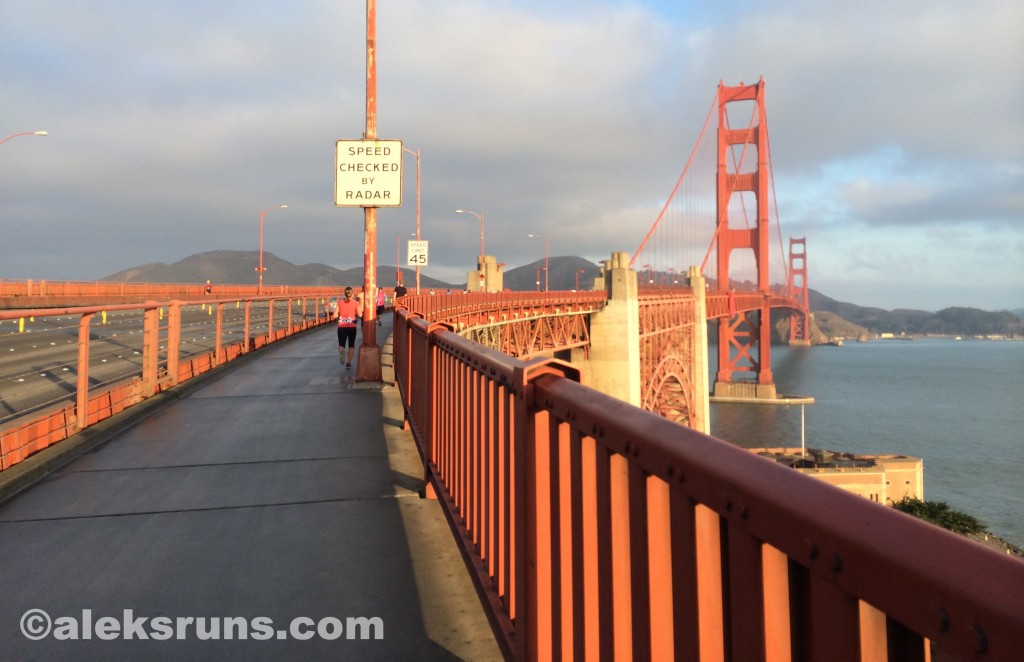 The 10-mile distance was new to the Mermaid Run San Francisco this year: a nearly out-and-back route over the Golden Gate Bridge. Clearly, a wise decision by the race organizers: more than 1,000 women had signed up for the distance; 996 completed it, according to the official race results.

The crowd was just the right size: small enough for this girl to make the bold decision of lining up right at the start line: 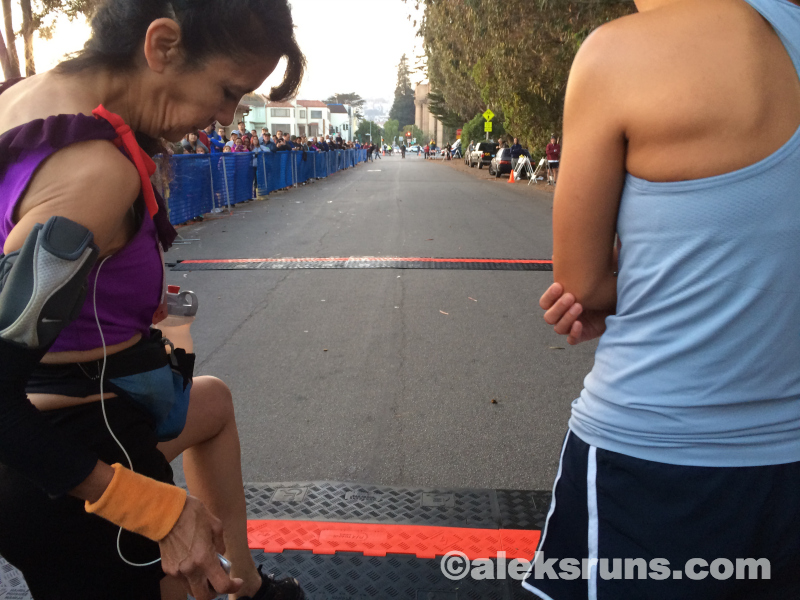 Yup. I was this close. The girl who’d end up finishing second was right next to me, and the winner of the race – professional triathlete Kate Major – must’ve been somewhere behind, because I can’t spot her in the official photos from the start: 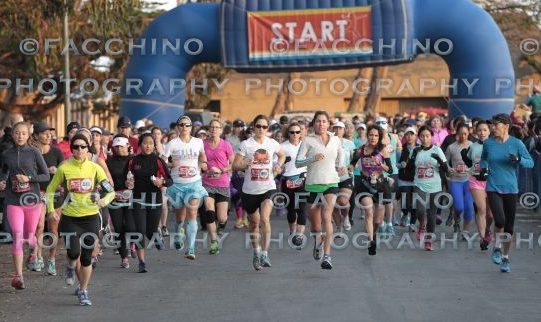 {Thanks to Facchino Photography for the fabulous photos – they are all amazing – but the price of $30 per digital download is incompatible with my budget!}

So yeah. Think I was a little out of my league up there, rubbing shoulders with the pros? For sure. But here’s my thing: just like everyone tells you to never start out too fast, lest you burn out and hit the wall and finish in misery, DNF or some other horrendous thing happens to you on the course, I’ve found the opposite works for me.

If I start out just a bit faster than my target race pace and bank a few minutes while I’m all fresh and jazzed up, I can afford to let down as I get tired. Take advantage of the adrenalin rush for the first couple of miles, count on the endorphins and embrace the suck for the last.

That’s what I did at this race and, aside from running this glorious course on a gorgeous day, I ended up finishing 47th. Heeey, out of 1,000 runners, I’ll take it. In fact, watch out, Kate Major, I come for you next. On my bike. Ha!

But seriously: the 10-mile distance is somewhat odd and I’ve only run it one other time, back in 2006. Seven years older, I PR-ed by more than six minutes. Take that, old age!

But I can’t take all the credit for my slightly-faster-than-usual pace on that day. Besides lining up with people way out of my league in the beginning and booking a fast first mile (and relatively fast miles 2 and 3, considering those are the hills you climb to get on the bridge), a few things came together to work to my favor:

1. Faster course.
It’s all relative, of course, but if the hilly terrain of the half marathons that go over the Golden Gate Bridge is what’s stopping you from racing there, the Mermaid Run 10-miler is definitely one to consider.

The course is set up so you hit the bridge right at Mile 3, then run around Vista Point and turn right around to run back on the same side of the bridge. Because you don’t actually get off the bridge so you can run under it to get to the other side, you don’t have that second climb up, either.

The views, of course, are fabulous as always:

2. Friends!
In a large race, running back on the bridge on the same side as runners behind you still running toward the turn-around spot would create congestion. But with a smaller race like this, it wasn’t an issue at all.

On the contrary: as I ran back towards San Francisco, not only was I treated to gorgeous views, but the sight of all the amazing mother runners I ran with – my fellow Moms Run This Town (San Jose chapter) ladies, as portrayed here pre-race:

Can you tell we are freezing our butts off? Man, it was a cold morning! If you ever do this race, bring layers! (Luckily, baggage check is very convenient and the lines were short.)

Of course, by the time I saw these smiling faces on the bridge, we had all more than warmed up! It was the most perfect mid-race thing a runner could wish for: just as my legs and the lungs started feeling the pace, every few minutes I would see a familiar face smiling and clearly just as high on endorphins and I was! I don’t know about wings, but it gave me just the pep in my step I needed to run back over that bridge at least a 10-seconds per mile faster than I’d come.

Coming off the bridge, of course, you’re bound to have a super-fast mile, thanks to the delicious downhills. Mile 8 was an average 7:39, according to my Garmin.

The final two miles aren’t the easiest, as you’d still need to run over the gravel surface of that trail-like path by the water (I should probably learn its name, what with all the “good times” we’ve had together in these past two weeks?), but if you’re familiar with the route, at least you know the end is nigh.

The field had gotten crowded by now, too, but dodging the 5K and 10K runners and the cute mini-Mermaids was, if anything, a welcome challenge to the brain (which, at that point, was screaming for an end). After all, if you don’t cross the finish line on the verge of collapse, you didn’t give it all?

Cross I did, in 1:23:56. Didn’t place as well in my age group as I’d hoped – all of 12th (thanks, Kate Major, for being my age!), but overall I’m very happy with that time. It was the perfect race, on a perfect day and in the perfect company!

Oh, and the swag: 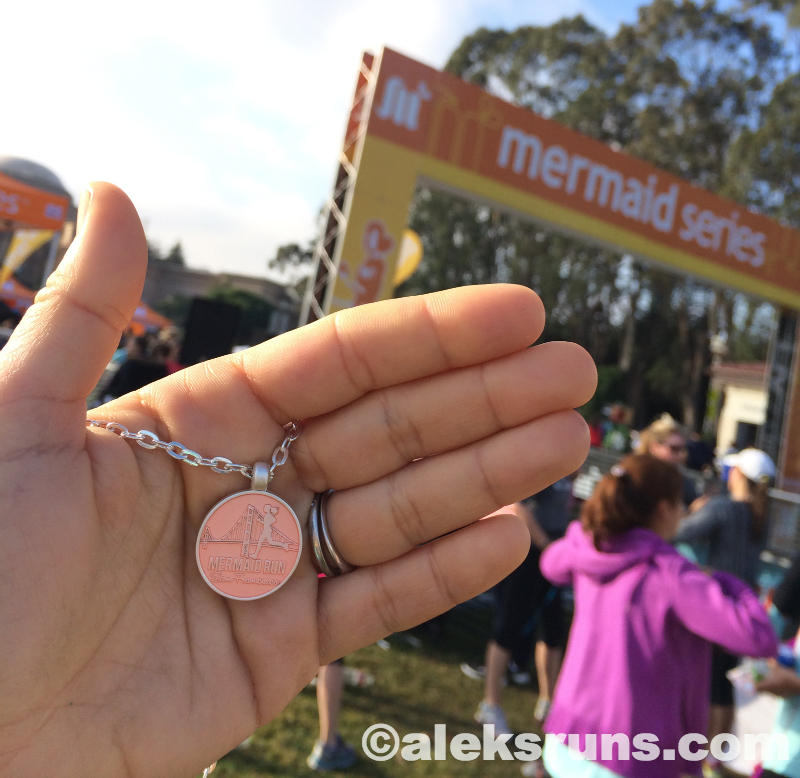 I wore it the next day and didn’t get any weird looks (like, I’ll admit, I get when I’m wearing my race medals in public. What? You’re not supposed to?)

If you’re looking for a fun, women-only race with a gorgeous course, the Mermaid San Francisco Sirena10 is definitely one to consider!