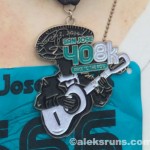 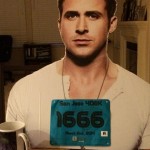 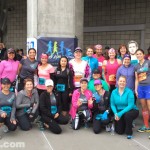 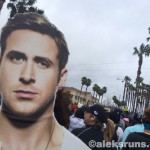 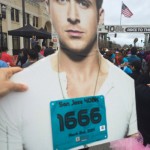 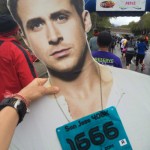 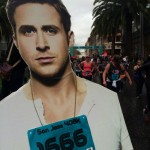 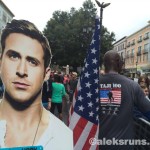 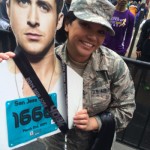 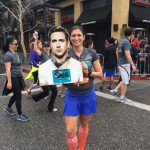 The 408K Race to the Row is famous! Not that it wasn’t famous before – among the local running community, at least – the race sold out all three years since its inception.

But at this year’s run, something very touching happened: Joe Bell, a 95-year-old World War II veteran, came out to cheer on the runners, dressed in uniform. Runners spontaneously broke out in applause as they ran by – then started veering off course to shake his hand. The video quickly went viral, thanks to coverage first in the local San Jose Mercury News, then the Today show and, before you know it, the news hit Runner’s World!

So yeah. Don’t blame me for feeling like one of the cool kids, for having witnessed this live. As I run by, I shoved Ryan Gosling under my arm and clapped. It was one of the most touching moments of the race.

And yes, I did say I shoved Ryan Gosling under my arm. Awkward. But before the 408K went viral, the race was all about Ryan. For me, anyway!

If you’re not familiar with the 408K, I should probably tell you that Ryan Gosling is a fun, “inside joke”-type presence at the race. He was at the expo last year – and this year, too, of course – so we decided to finally give him a chance to see actual race.

I was more than willing to carry him. Because… Hey girl. Who wouldn’t want to run around with Ryan Gosling, yeah?

Race morning started bright and early, 6 a.m. and a cup of coffee with Ryan. What could be better? 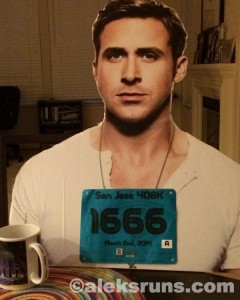 I got dropped off at the start, which I highly recommend for this race. It’s a point-to-point route, and even though free shuttles are provided to take runners back from the finish to their cars, if you can spare yourself the hassle of finding parking pre-race, by all means do it.

I wanted to get to the start area early enough to meet up with MRTT, the most awesome – and free! – running club in the area (there are chapters all over the country). Here are some of us, representing the San Jose and Morgan Hill chapters. Ryan was there too, of course. 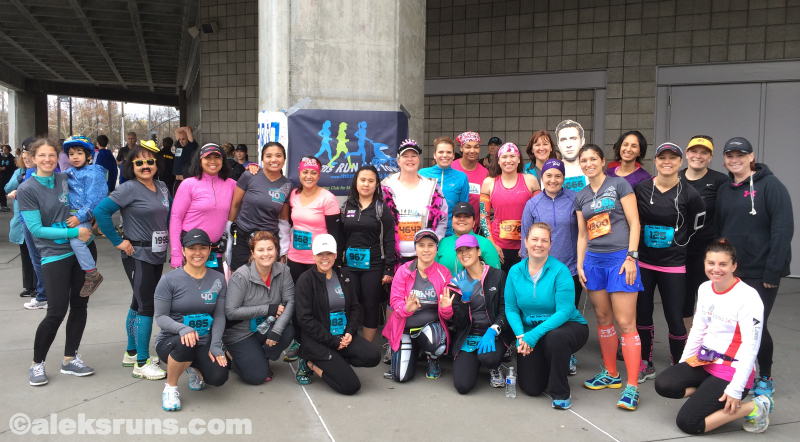 (We did do individual photo ops with Ryan, but I’m not allowed to post these. So let’s leave that to your imagination. You’re welcome.)

After a quick run to the UPS truck that would deliver checked bags to the finish, we headed over to the start. I decided to make Ryan’s journey a bit more fun than originally planned, and lined up at the very back of the course. This way I’d get to pass more people, so Ryan could cheer them on! 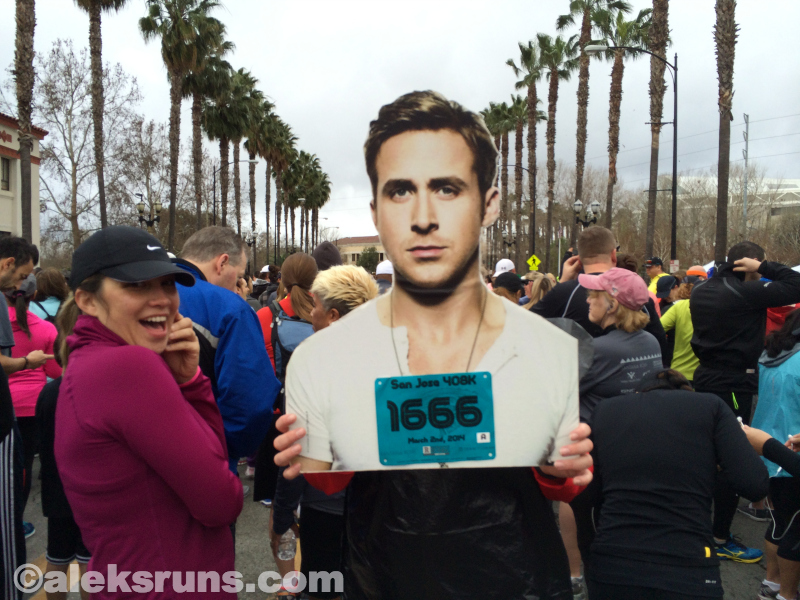 Ryan became the star of the third corral instantly, of course. He took photos with a bunch of runners and enjoyed the pre-race atmosphere.

We were quite a ways off from the start, indeed. But once the gun was off, it took only a few minutes to get there. 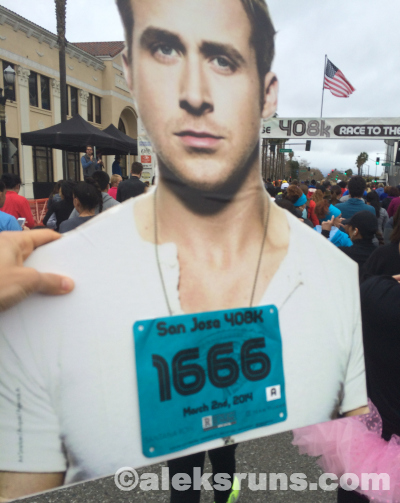 And then we were running! I expected a lot of zig-zagging and congestion in the beginning, especially because I think many runners’ corral placement ended up flipped. (I spoke with quite a few people who had registered in the 12 min/mile or slower corral but got a bib for the sub-8 min mile one, and vice versa.)

Ryan and I had great fun weaving left and ride by runners and being cheered on by ladies and gentlemen alike. The loudest cheerers were, of course, Ryan’s biggest fans at MRTT. (You know who you are!)

I don’t have photos or video of the impromptu tribute paid to Mr. Bell, unfortunately, what with trying to figure out how to run and clap while holding Ryan. But I did pause to take a few pics on Mariachi Mile, perhaps the most famous part of this course. 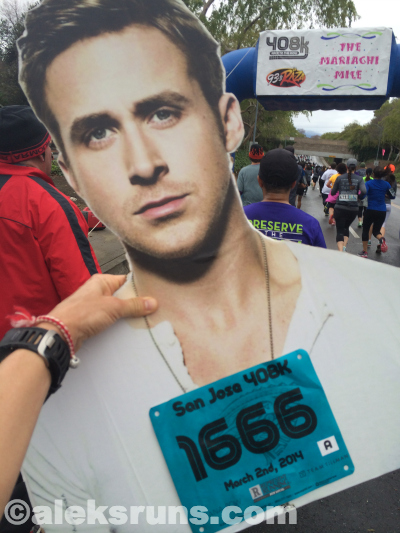 I did lose about 40 seconds waiting to get a clear shot of these guys, but they didn’t skip a beat when I propped Ryan at their feet. Must be used to all the weird stuff runners do mid-race. 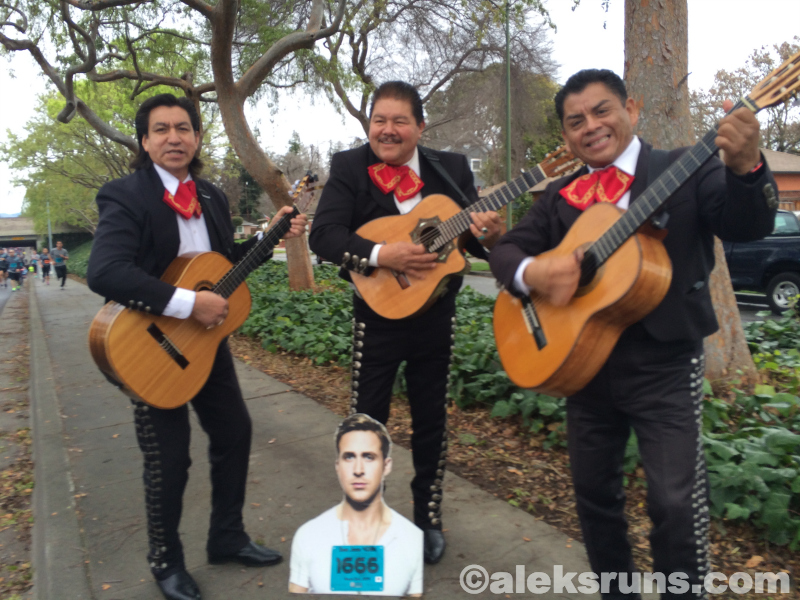 Too soon, Santana Row came into view. (I was running 8:00-8:20 minute miles, but with all the fun and cheering and race entertainment, the miles went by quickly!) And then, one of my favorite race finish lines: 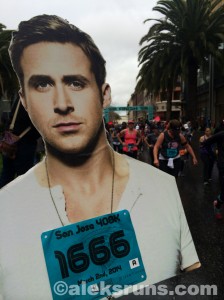 Ryan came in a second before me, at 41:37. What can I say. It’s not just his good looks, apparently he’s very competitive. 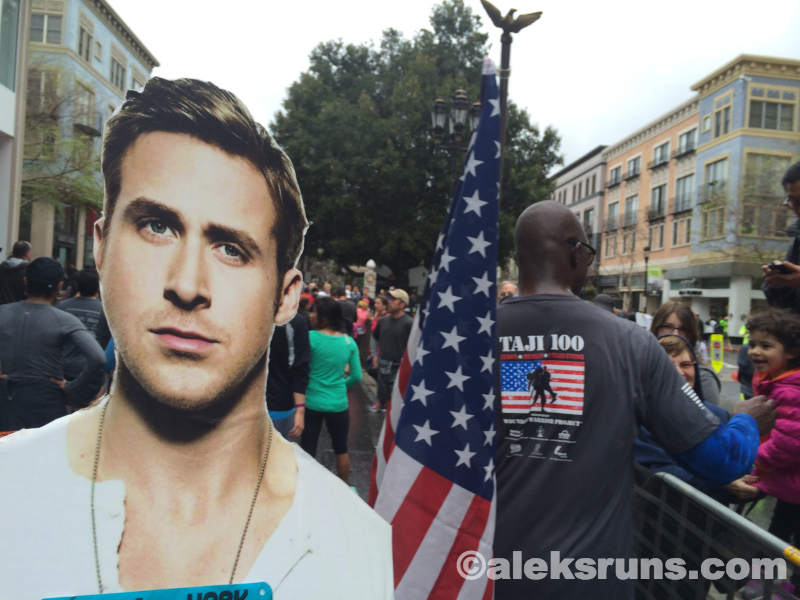 The very best part? The beautiful veteran who placed a medal around Ryan’s neck: 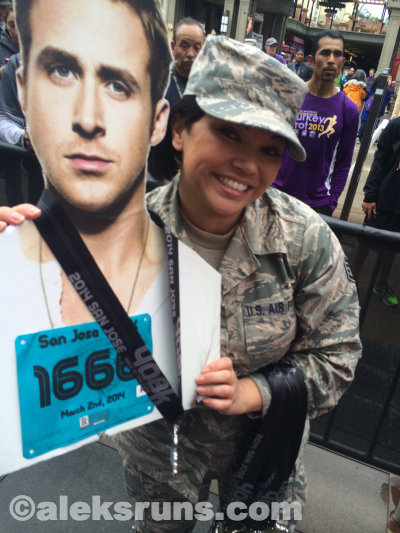 The 408K is no small race – more than 4,500 people ran this year – and finish-line crowding can be tricky. But this year, the organizers kept people moving through the somewhat narrow Santana Row, to the plaza and parking lot at the end of the street where we were handed a goodie bag with snacks and water. (Volunteers handed more water right after the finish, as well.)

Unfortunately, I didn’t have much time to hang out at the Row this year, which is the most fun part of this race. There are lots of specials and discounts at the restaurants (bottomless margaritas, hello?) and cafes and an expo with fun activities with local teams like the SF Giants, the San Jose Sharks, the Oakland Raiders…

Ryan kept on getting photo requests, of course. I got in the way a few times:

So there you have it: another memorable 408K race is in the books, and a viral one, to boot! 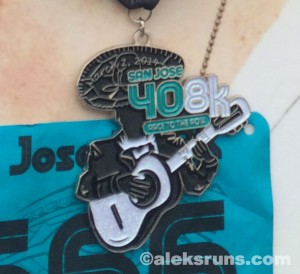 The 408K Race to the Row is a charity partner of the Pat Tillman foundation. Please consider making a donation.