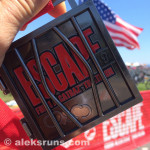 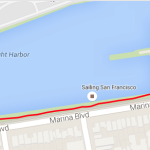 If loving triathlon is a crime, I plead guilty. So lock me up in Alcatraz and see if I can escape.

On June 7, 2015, I was one of nearly 2,000 triathlon-loving convicts sitting on the floors of the San Francisco Belle, on a one-way trip through the unwelcoming waters of the San Francisco Bay. Next stop: Alcatraz. We would not be dashing into the ocean from the beach, or swimming in and calmly treading water before the starting gun went off. Fittingly for this race – one like no other in triathlon – we would be jumping from a boat and beginning the swim immediately.

The infamous first leap is what I was dreading most in the months leading up to Escape from Alcatraz. Everyone jumps within seven minutes. How crowded will the water be? Will I get pushed? Hit? Swum over? Yes, as it happened, all of those things.

Escape from Alcatraz is known for its rough swim, hilly and technical ride, and hilly run featuring multiple stairs, running on the beach and up a 400-step sand-ladder. Truly an unforgettable race, from the first step on the boat to crossing the finish.

“You have three minutes to board the boat. The boat leaves the pier in three minutes. You don’t want to miss the boat!”

The humor was not lost on us. A dark line of semi-sleepy, semi-nervous folks in wetsuits, we walked slowly (solemnly?) from the shuttle bus that just dropped us off at Pier 3, towards the unmistakable beeping sound of a timing mat. Only later did it occur to me that this was done to count the number of people getting on board. Two-thirds of us, it turned out, were men.

That men greatly outnumbered women became clear immediately upon entry, when we bumped into a long line curving its way to the men’s restrooms… and no line whatsoever to the women’s. A race-day miracle! As is my habit, I decided to go – even though I didn’t need to quite yet. You never know with these things, plus: I did get some smart advice from a gal in there. As we chatted about the water temperature and how it would feel upon jumping, she said: Oh, it’s cold. But if you pee in your wetsuit right before you jump, it won’t feel that bad.

Really? Pee while standing on the deck of a boat, before I’m in the water? Welcome to triathlon: a sport where you pee just about anywhere.

Anyway, the pee business taken care of, my next task was to find a space to sit. There were two levels (floors?) on the boat; anyone 40 years old and younger was on the first level. The interior was stripped of seats or any furniture besides the plush Persian-style carpet. By the time I boarded (three minutes to go, remember?), all of the wall space was taken up, as was most of the floor. After walking over protruding legs, arms and, occasionally, a horizontal body trying to nap, I finally found a spot. Not enough space to stretch my legs, so for a while I kept my knees up to my chin, closed my eyes and tried to ignore the noise.

This, of course, was impossible. Imagine a thousand people lined up like sardines in an enclosed space with remarkable acoustics, all talking at the same time. I gave up my short attempts at meditating and started eavesdropping the conversations around me. Most were about swimming, biking, running, or all of the above. What did you expect?

One conversation was particularly memorable, though. To my right sat a tall, tan, lean woman with long dark hair. Imagine a modern-day Goddess Nike clad in a black-and-gold wetsuit; that was her. The man next to her was tall, blond and very athletic-looking, also. He asked in a distinctively German accent:

So, what is your strongest discipline?
[FYI, guys: if you ever find yourself on a boat with a bunch of triathletes at the start of a race, this is not a bad opening line. Extra points for using the word “strongest” and not “favorite,” too.]

Oh, mine too! So you swam in college? Or high school?

I swam for Greece.

[So. She literally was Greek.]

That’s great, did you go to Athens?

Me, as well. I swam for Germany.

At which point I had to bury my face back in my knees, because a hysterical whelp would’ve otherwise escaped my lips.

I was on a freaking boat, about to jump and swim a mile and a half in the angry cold ocean, and next to me was the freaking Olympics.

It’s fine. Everything will be fine.

The minutes must have been ticking more quickly than I realized, because in a few more blinks the loud voice in the speakers informed us that we were about to listen to the national anthem. We all stood up.

Listening to the national anthem is one of my favorite parts of racing. There’s something stately, majestic even, about a large, noisy crowd that almost immediately hushes down, knowing that we’re a “home of the brave” away from beginning yet another challenge, journey, or whatever it is each of us came to pursue. Now multiply this feeling by a thousand, and you might get an idea of what it was like on the San Francisco Belle. Hundreds of us, huddled together, swimcaps on, goggles on, swaying gently back and forth with the rhythm of the boat — at the point of no return.

Then the pros walked by to the loudest cheers the crowd could master, and the gun went off.

My little spot next to the Olympians turned out to be a mere three steps from the door we all walked out of to jump, so within seconds of the gun, I was staring at the water. I jumped without thinking. The part I had dreaded the most turned out to be easiest.

I started swimming immediately, sighting to my left as instructed, in order to fight the current that was pulling us to the right. I didn’t feel any currents. All I felt were waves, bodies and limbs. I must have been one of the first jumpers, because in the next (who knows how many minutes), I got kicked, hit, swum over, kicked and hit again, and again. It truly felt like everyone else was moving, but me. I kept pulling, kicking, sighting, pulling again, sighting – all while feeling like I was not gaining a single yard.

The lack of buoys didn’t help, either. Unlike every single OWS I’ve done, the Escape route is not marked by buoys – or kayaks, for that matter. I knew there were kayaks somewhere out there, watching out for us, but the waves and the people made it pretty much impossible to see them. The crowd spread out so much that I questioned my swim direction constantly. Am I going the right way? Will I end up under the bridge by mistake?

When will this end?

When finally, finally, I saw people standing up and walking to shore, I looked at my watch and was floored: the swim had taken me less than 40 minutes. A good three minutes less to swim 1.5 miles than I had needed just a week before, to swim 1.2 miles at Ironman 70.3 Hawaii.

A few rushed steps to get out of the beach and cross the swim-out mat, and I was on my way to T1.

Like most anything Escape, the swim-to-bike transition is interesting. It features a brisk 0.6-mile run along the Marina Green to T1, so the organizers give participants the option to leave a small bag with a pair of running shoes (and a towel, if you’d like) for the short run.

Which I took advantage of, against my gut feeling and Coach D’s advice. (The Santa Cruz Triathlon and Tri Santa Cruz both have nearly a 0.5-mile run from the ocean to T1, and running that barefoot is perfectly fine.) I lost a good two minutes taking off my booties, drying my feet and putting on the stupid shoes. Rookie mistake. If I’m lucky to do this race again, I know better.

Really. This was hilliest, most technical course I’ve ridden so far. I think the views were pretty? I was too busy watching the road and slamming on the brakes on the downhills, or pushing like mad to go uphill. As a result, I remember these little things about the bike:

1. Running out of T1, right before the Mount line, we saw Andy Potts and Eric Lagerstrom run towards the finish in a mad sprint. Eric Lagerstrom ended up winning by two seconds, which I watched later on video. Epic.

2. There are lots of out-and-back sections, so I saw Mirinda Carfrae fly by on her bike not once, but twice. Yeah!

3. As I was taking a sharp right turn before climbing yet another hill, I saw an ambulance, a fire engine and a stretcher with an athlete on it, wearing a neck brace. Yikes.

I did enjoy the ride, somewhat, but definitely enjoyed the sight of the Dismount line much, much better.

I remember absolutely nothing about T2. It took a bit of running on grass to get to my rack space, and like Coach D said… well, my transitions could use some work.

Now, this was fun! Hills, stairs, beach, a 400-step sand ladder: not your typical 8-miler. I loved it! For what it’s worth, this run changed Escape from Alcatraz from “once is enough” bucket list status to “must do again” for me.

There was never a boring moment. And we got to see the pros race again, twice!

The course started flat for two miles, which was great because I got to get my running legs back.

Hello, running legs! I missed you in Hawaii?!?? Where’d you been?

I settled into an 8-minute mile pretty quickly and it felt great.

Then, of course, we hit our first set of stairs, so that slowed us down. It got quite crowded, everyone was walking… time for a little break. My strategy was to try and run strong on the uphills, but really work the downhills; walk the stairs and definitely walk the sand ladder.

Speaking of sand… Right around Mile 3, that’s what we got! We literally ran down to the beach, then on the beach for a mile, and then we came to the Sand Ladder.

The Sand Ladder was something else. As in, literally, it had its own timing mats and everything, so all racers got their Sand Ladder time of the day. Mine was 3:37.

Three minutes and 37 seconds of trying to step as closely as possible to the wooden logs that supposedly make up the ladder — but, for the most part, my feet sinking ankle-deep in sand. Fire in the quads, fire in the butt, fire in the calf muscles, everywhere fire.

That climb was so slow, in fact, that my Garmin auto-paused. I guess it decided that the Sand Ladder ain’t even worth its time!

[Watch this video from a few years ago to get an idea of what it was like. source]

When we finally dragged ourselves up and hit the road (to continue climbing, mind you, but at least it was on solid ground this time), I was ready to run — but the space was crowded again and we pretty much walked/ shuffled for a bit.

After that we got the best downhill road ever and about two flat miles to the finish, which I managed to take in 7:30 and 7:20, respectively. I even had the energy to high-five the race announcer. I Escaped!

2 thoughts on “Escaped from Alcatraz”