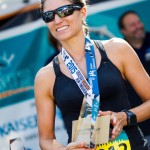 Teal and black may not be as popular in the Bay Area these days as the gold and blue hues of the Golden State Warriors, but let’s face it: San Jose is Sharks territory and always will be.

Last weekend was the third annual San Jose Sharks Fitness Faceoff, featuring a solid selection of events: a 5K, 10K and kids’ fun run, a 50-mile and 20-mile ride, and a bonanza of fun activities at the finisher expo.

We did the 10K and kids’ run last year and had a great time. I ran a personal best on the flat course, so I wanted to see if I could improve my time.

I met up with a friend from my tri club and we warmed up together: an easy-pace 15-minute run around the block with four 30-second strides at the end, to introduce the legs to the hitting-the-pavement thing a bit. With about 10 minutes to go, we lined up. 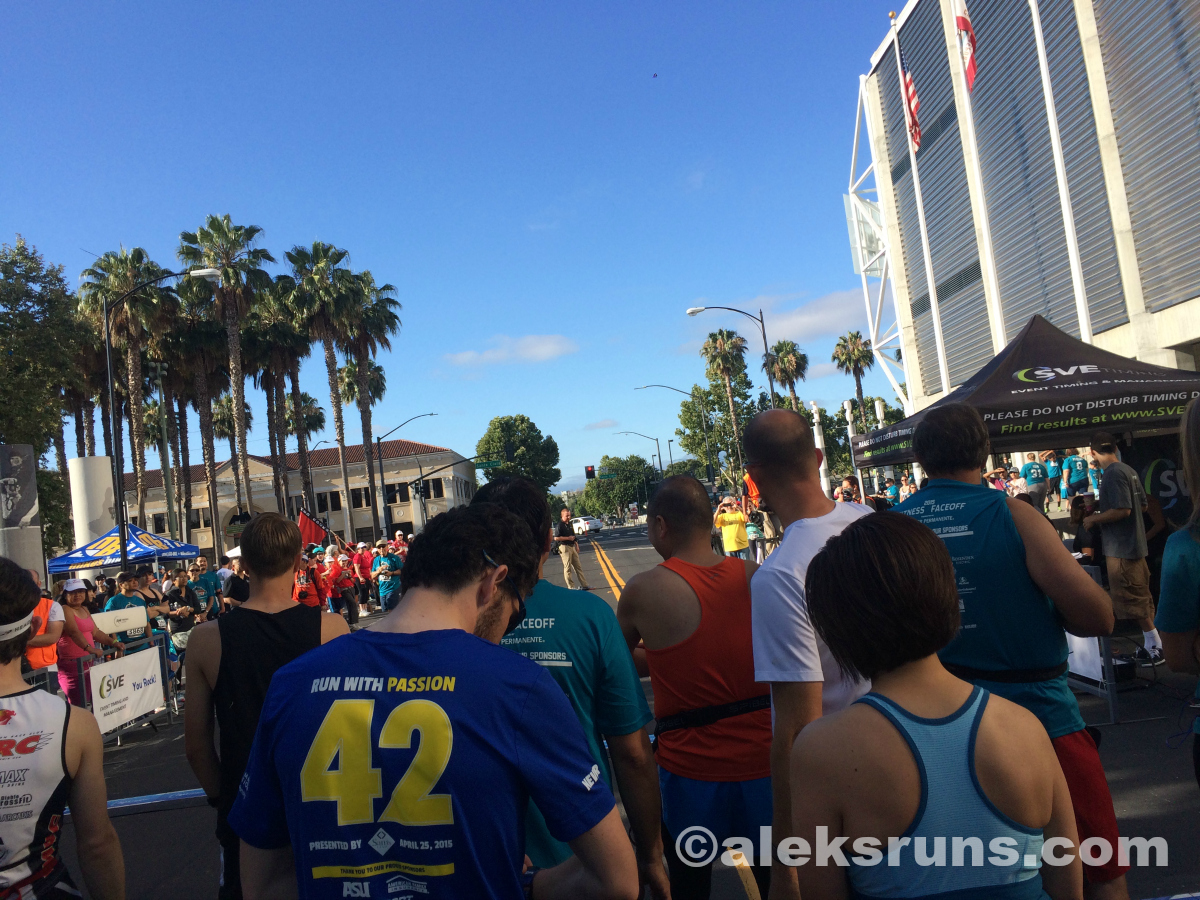 (Do you think we were close enough to the start?)

It was not even 8 in the morning, but the temperature was creeping up to the low 80s. Sweat was dripping all over my face as we listened to the Star Spangled Banner and I couldn’t wait to get started.

Except once the singing was over, we didn’t start. We waited. And waited. The race started 18 minutes late. That’s never fun, especially if you’ve warmed up (and now you’ve effectively cooled down), but what can you do.

At the start signal, we all darted off like sharks were chasing us and within a few hundred yards, the lead group separated. They were running 5-minute miles. One woman ran with them. I had strict orders from Coach D to stay at a 7:30-minute pace for the first two miles, even if I felt I could go faster.

I did feel I could go faster! I also thought my watch wasn’t working properly, as the pace was jumping all over the place, from high 8’s to low 7’s and, briefly, into the 5’s. I reached the first mile marker at 7:18 on the clock — and roughly that on my watch, so I guess it was working just fine. Oops, I was supposed to go a little slower than that. But it can’t hurt, can it? (Oh, just you wait.)

By the time we approached the second mile marker, I had passed a bunch of runners, few of them women. My watch showed 15 minutes of running. So I had slowed down a bit. See? Good thing I banked those precious seconds in the first mile. (Seriously, though, banking time in the beginning is apparently really bad. I’m not supposed to do it.)

By mile three we hit the one “climb” on the course: a freeway overpass. It sucked.

When your brain and legs have gotten used to the idea of a flat race, even the smallest bump feels like a mountain.

I was running pretty much on my own at this point. The front group (groups?) were too far ahead to even try to catch. I leapfrogged with two guys for a while, then with a dude pushing a stroller. For the most part, though, I was lonely.

The fourth mile marker showed up late: 4.35 miles on my watch. Was my Garmin wrong? Was the mile marker wrong? By that point in the race, I was supposed to run as fast as I could. But was I? Had I been running much slower than I thought I was running, because my GPS watch was off? I tried pushing the pace, but it was really, really hard. (My Strava file shows that I actually slowed down a bit in this mile, 7:29. Maybe it was the small incline… or maybe it was my stupid head.)

Then the fifth mile marker came and my watch showed 5.35. That did terrible things to my brain. I was wrong. I was slow. Much slower than I thought. Shit. I hate this. I hate 10Ks. They hurt. My left leg hurts. My feet hurt. My right foot hurts more than my left foot. And I have 1.2 miles to go.

I tried picking up the pace, but it hardly worked. (Mile split: 7:24.) At this point, the course was crowded with 5K runners, so I had to start dodging. Dude with the stroller passed me. Respect. The other two dudes passed me, as well. More respect.

Who knows. Maybe my Garmin was wrong? I looked at the course from last year and it was just over 6 miles (but not 6.2), as well. Maybe, then, the course was short.

And it did turn out that there was only one other woman ahead of me. She finished in 42:36. A two-minute difference in a 10K could as well have been two hours. I didn’t even see her out on the course. I guess we both lucked out that your typical 10K leader types (women running 6-minute miles and faster) didn’t show up that day.