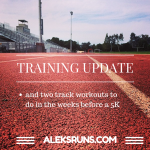 It’s been a while since I posted a training update. But that’s because I haven’t been training much.

True to my “offseason” observations – in particular, why everyone needs it – I took one. I’ve still been swimming, biking, running, and even hitting the weight room at the gym once or twice a week, but in a strictly unprescribed fashion. I haven’t had a single structured training week since the See Jane Run Women’s Triathlon on September 27.

Well, I did run Ragnar Napa Valley in October. I got the incredible opportunity to do it with a team sponsored by Nuun Hydration (#TeamNuunNowWineLater FTW!) – and I had an absolute blast! My three legs added up to more than 28 miles, including 13.3 for the last one. It was awesome!

Last leg: ✔️ A half marathon (13.29, to be precise) to round out my Ragnaring, while my van mates went wine tasting (and didn't bring me any??wut???) And NOW: time walk across that F.I.N.I.S.H line and drink all the ! #NuunNowWineLater #Ragnar #innerWILD #ragnarnapa

I’m still planning on writing a recap of the whole crazy experience, by the way. Better late than never?

Other than that, though, and the three times a week when I have a scheduled swim, run or ride with my tri group, every day in the past almost two months has been a “Hmm, what do I feel like doing now?” kind of day.

I even went to Zumba class — twice. It was fun, but dangerous for everyone around me, and so I think I better stick with forward motion from now on!

I’m one of those people who thrive on a schedule, so my level of enjoyment at the lack of it took me by surprise. As did my lack of enthusiasm and desire to impromptu-sign up for a race when I had the chance to jump into the Mermaid Sirena 10-miler at the beginning of November. I volunteered at one of their events, which gives me credit for one free run, yet I didn’t do it. Who are you and what have you done with my former self?

Goes to show that I really needed the break, I guess.

But a few weeks ago, my friend asked me if I want to do the local Turkey Trot and I didn’t feel at all disgusted at the thought of racing. In fact, I felt… tempted.

The Silicon Valley Turkey Trot is the largest in the country, with 30,000 people running a 5K or 10K on a flat, fast course, custom-made for PR-ing. If you’re in shape, of course.

Someone who’s been off-seasoning for the past two months? Not so much.

So I registered for the 5K and, with exactly three weeks to train, put myself on a “get some speed back NOW” plan.

Three weeks are obviously not enough time to get into anywhere close to the 5K shape that I’d like to be in, so what I’m trying to do is probably stupid and won’t work. But the good news is, I don’t have an official 5K PR that’s all that great, so with this Turkey Trot, I can hopefully register somewhat of an improvement on Athlinks.

I’ve re-introduced two quality runs a week: one track session on Mondays, and a tempo run on Thursday. On Saturday, I do my usual tri-group trail run, which is usually around 7 to 8 miles, with a good amount of hills (which I take as easily as I can).

Here’s what I’ve done so far:

The rest of the week, I did some easy weight-training (practically a day off), swam, and rode my bike.

Because I can’t help it, that’s why.

The next day, I took completely off.

Wednesday, Nov 18 I swam with my tri group in the morning and that was going to be it for the day, but then I got new running shoes and couldn’t resist lacing up. A super easy-pace run around my neighborhood, 5K in 27:22 (8:48 avg pace).

So there you have it, the reality of coming back from an offseason: it’s hard, it should be done gradually — much more gradually than what I’ve been putting myself through, but after next week’s 5K, I plan to reinstitute a more relaxed schedule for a slower comeback.

Surprisingly, I’ve been looking forward to and enjoying these workouts, which is proof enough for me that it’s time to come out of hibernation and start building a base for 2016.

The Boston Marathon awaits… and oh yeah, my very first Ironman in July!