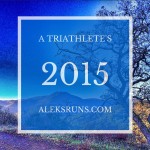 One of my early-January rituals is to look back at the past year and crunch the numbers on my training: miles, time, sessions, race favorites, results, PRs… you get the idea. I’m getting to it a little late this year, but what can I say: January got away from me.

I’ve been busy training for the Boston Marathon… is that an excuse? Maybe. But I did crunch the numbers first thing this month. Then I ran a little 2014-2015 comparison. I love that sort of stuff, don’t you? 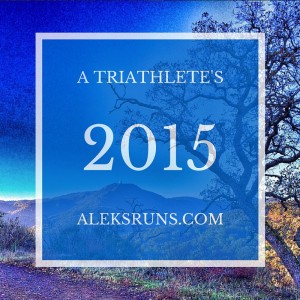 How many miles does a triathlete travel by swim, bike and run?

Time is on my side, yes it is

The thing with endurance sports is that time is on your side: if you’re consistent and train smartly, you will get better. But, you do have to put in the time.

How much? In 2015, I spent 496 hours swimming, biking or running. That’s nearly 21 full days of training, not including sleep. (Don’t get any ideas, though — sleep is more important to me than food… OK maybe it’s a toss-up.) Oh, and that doesn’t include the time spent putting on cycling gear, foam rolling tight muscles, driving to the pool or the trail; not to mention the travel time to races. Triathlon is quite the (incredible, amazing, empowering, endorphinizing) time suck, isn’t it?

My way of saying: how many times a day did I train? The answer is an average 1.7. I did a total of 630 swim, bike or run activities in 2015. A few of these included some bike commute time, so there would be days when I’d log in four bike rides – but hey, everything counts!

If you know triathlon training, you know two-a-days come with the territory, and most solid marathon-training plans have you running twice a day at least a couple of times a week, too.

I will state for the record that I took a total of 15 rest days in 2015 (ha! numbers. love ’em!). Three of those were in the very beginning of the year when I came down with the flu (luckily, I was out for less than a week, thank you immune system!), and the rest were either after big, tough races – or for international (super-long) travel. And before you rule me out as crazy, understand that my training schedule is meticulously planned to involve proper rest after hard workouts – an easy swim after a hard run, or a very short and slow run after a long day on the bike. I survived the year without major injuries — and I did take a solid two months off of structured training, during which I did light, easy activities (swim, bike and run, of course) just for the fun or the social aspect of it, usually both.

2015 was a year of quality, not quantity. I raced a grand total of 10 times during the year – not even once a month. And now that I’ve gone both ways — in prior years, I’ve raced anywhere from 14 times (2015) to 24 (2014), I am convinced that if you want to see race results, you have to sacrifice race frequency. I didn’t realize back in 2014 how tough it was on my body to race twice a month – and no, signing up for a half marathon with the excuse that “I’ll use it as a training run” just doesn’t work for me. I show up, I get amped up, I go as fast as I can – which often doesn’t end up very fast because a week isn’t enough to recover from a race in order to race well again.

That included:
One 5K
One 10K
Two half marathons
One marathon
One sprint-distance triathlon
One Olympic-distance triathlon (sort of; Escape from Alcatraz is in its own category there)
One half Ironman (70.3)
And two overnight relays (The Golden Gate Relay and Ragnar Napa Valley)

And now, the fun part! I PRed every distance I ran this year, with which I am very satisfied. This was, after all, the whole point. Here are my 2015 PRs:

The knowledge that in your late 30s you are faster than you were in your early 20s — or ever: Priceless.