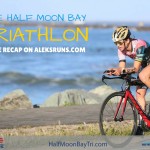 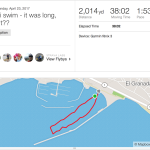 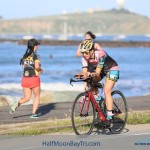 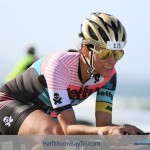 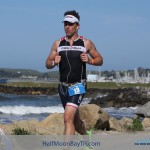 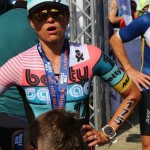 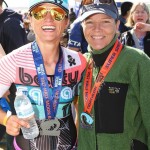 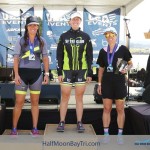 In the heat of Ironman training last year, I made a pact with myself that the following season I’d take it easy and stick to the Olympic distance.

In truth, the last time I completed an Oly tri was in 2013, my “rookie” triathlon year. I did two that year, both under less than ideal circumstances. (Details; more details.)

So in a way, my first race of 2017 at Half Moon Bay Triathlons felt like my first Olympic distance race ever. I had no idea what to expect.

Half Moon Bay is a sweet little fisherman’s village and harbor on the Northern California coast, just 20 or so miles south of San Francisco. It has beautiful scenery and with no chop on that side of the bay, an ocean swim that’s as “calm” as it gets. But at this time of year, the water is freezing and strong winds and temps in the low 50s usually make for chilly bike and run conditions.

The cold kept me away from this race for its first two years, and last year it was scheduled too close to the Boston Marathon. This year, I decided to give it a try. 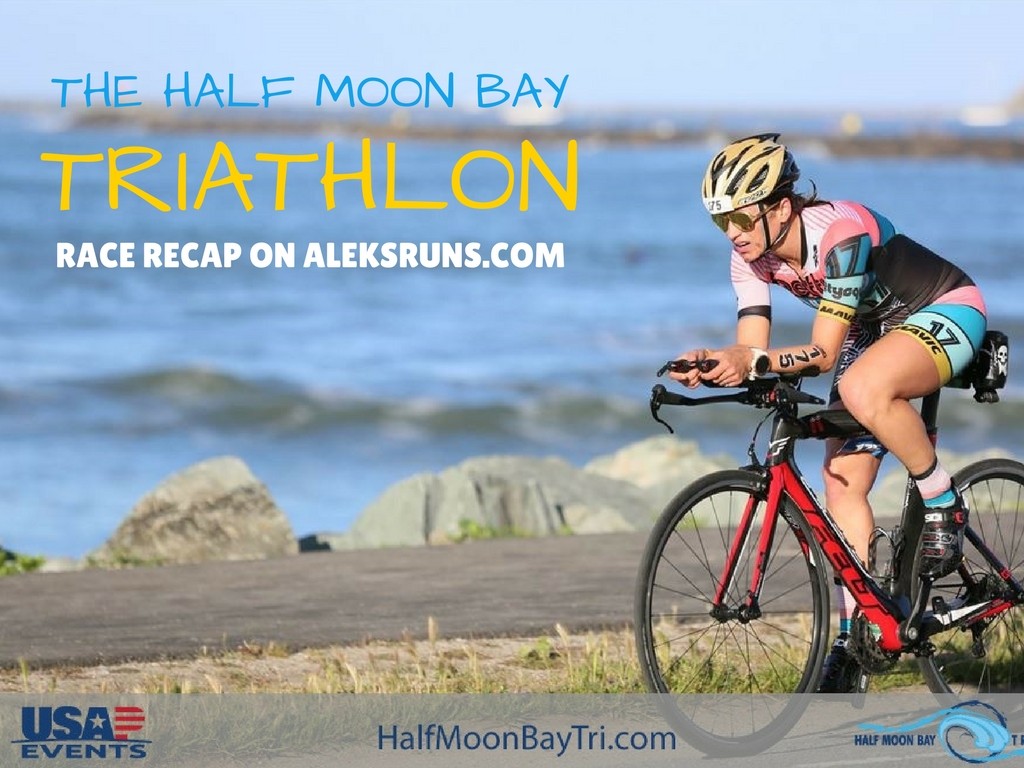 So here I was, setting my alarm for 3:45 a.m. on April 23. Oddly, I didn’t mind getting up at this ridiculous hour. It had been so long since my last race that I was actually excited!

The drive to Half Moon Bay in the pitch black night is scary as poo, with the unending, twisty, hilly turns of Hwy 92. I was that car driving 20 mph in the 25 mph zone — which is kind of funny when you consider that later that day, I’d end up riding my bike faster.

Luckily, I arrived without accident, and right on time, around 5:30 a.m. I found some friends in transition, set up my stuff, and had just enough time to do a little 2-mile warmup run, as instructed by Coach. Winning already!

The warmup gave me a good idea of the run course, which was all by the ocean and fairly flat: but already quite windy. I guess that comes with the territory!

At 6:30 a.m., we were rushed out of Transition and headed to the beach, about a third of a mile away, to get ready to swim.

Knowing that the water would be in the (high) 50s, I came prepared with a neoprene skull cap to wear under my race swim cap, neoprene socks, and swim gloves to keep my hands warm. They had warming stations on the way to the swim start/ finish (i.e. inflatable little pools filled with hot water), and were hosing hot water down people’s backs, into their wetsuits, to provide an extra warm layer. That felt so good!

I dropped an extra pair of shoes in that area, too, for the somewhat long run back to T1.

Swim waves were three minutes apart, separated by age in 10-year increments, men and women mixed together. I’m not crazy about a setup like that, because some men simply seem to swim too aggressively and the risk of getting smacked on the head is high, but that’s triathlon.

Our wave took off at 7:06 and I immediately noticed three things:

This was going to be a long, long swim.

It literally was a long swim: my Garmin showed 2014 yards as I exited the water, and later on I saw that almost everyone on my Strava flyby list had 2000+ yards as well. FYI, 2014 yards is 1841.6 meters, which is much closer to the 1900-meter length of a half Iron-distance swim than the 1500 meters of an Olympic course swim. But I get ahead of myself.

The good news was that I got used to the water temperature fairly quickly. I deeply regretted the choice to wear gloves, but couldn’t get them off at this point. I thought about stopping at a water safety volunteer’s kayak and handing them off, but wasn’t sure if that was allowed. So on I went, pulling and pushing back that water like I meant it. (My arms and back were sore in all the places after this race, even my biceps. It was like I’d been pumping iron all day!)

This was also one of the most crowded swims I’ve ever been in. It seemed like the crowd hardly spread out after the swim start – maybe because before we even had the chance to find some space, swimmers from the wave after us caught up, and then we caught up to people from the wave before us. I stopped five or six times to empty out my goggles and was promptly run over every time.

When I finally reached the end of that swim, stood up and looked at my watch, I was in shock – and not in a good way. It had taken me 38 freaking minutes. What?

I have been working harder than ever on my swimming and my times in the pool are improving, so I was disappointed. But I didn’t really notice the longer distance at the time and thought this was simply a result of swimming with gloves.

Well, I had a nearly 0.4-mile long run to transition to process and get over the disappointment. Sh%t happens, best to not dwell on it and let it ruin the rest of the race.

I took off the stupid gloves, slipped off my socks, put on shoes and booked it, running as hard as I could to transition. It was a good way to warm up, too!

The timing mats for the swim-out were at the transition area entrance, so my official swim time was even worse:

The good news was, by the time I was ready for the bike, the sun had come up and it was actually warm. I had heard many stories from people who had done Half Moon Bay about being cold the entire race, so I had gloves and a cycling bolero, which I ultimately didn’t need. Just the helmet, glasses, socks and shoes, and on to circle the entire transition area to Bike Out in my cleats. (That was awkward, but no: I am not even one bit mentally ready to try a flying mount yet.)

Beautiful bike course! Ocean on one side almost the entire way, mostly flat with a few gentle rollers on the way back. It was windy, but in an out-and-back course, what we lost to the wind in one direction, we gained in the other. I was feeling good, pushing pedals, passing people, and every so often getting passed by the zip-zip of deep race wheels.

Things got a bit more crowded once we merged with the sprint distance athletes on my way back. OK, to be honest, it felt like the freaking Tour de France. Packs of people riding two- or three-abreast, and drafting galore. I was doing my best to pass as quickly as I can and find space to keep riding.

I don’t ride with power, so I have no idea what kind of watts I was pushing – but kept my effort high the entire ride; this is not a smile: 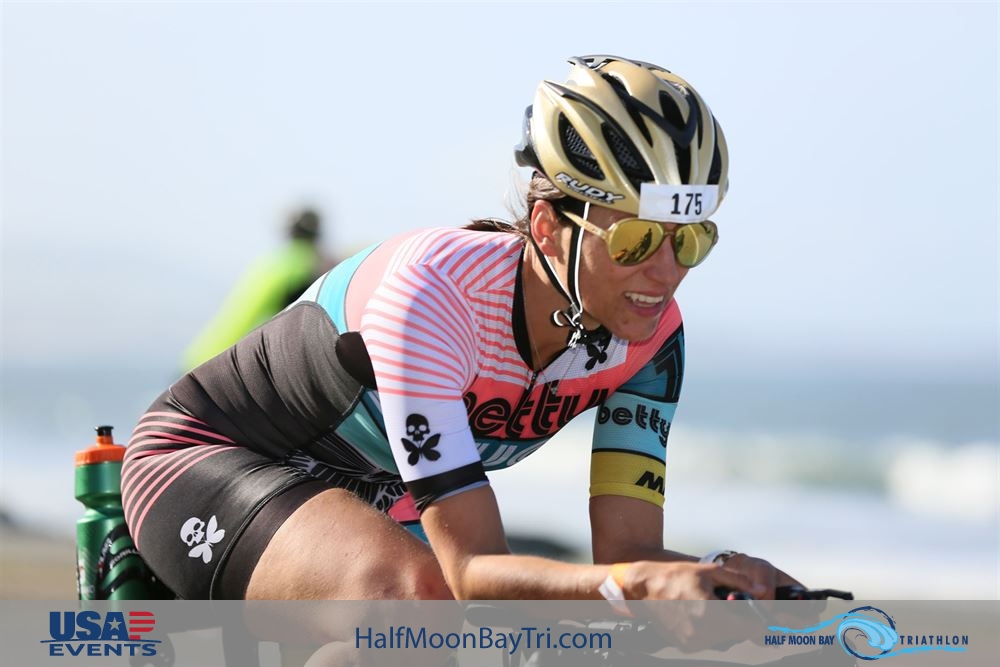 I rolled back into transition and saw a whole bunch of bikes still missing from the racks. People were still out there riding and I was done!

This was a quick helmet off-hat on, cleats off-running shoes on thing. I also realized I forgot to leave a gel out for the run, so I grabbed one from my tri bag. And off to run a 10K.

I took off at a pace that felt good and sustainable, so it was a bit of a surprise when I looked at my Garmin and saw 6:50 pace. Oops, I most definitely can’t hold that for six miles, let’s dial it down.

Then I looked at the gel in my left hand, and another “oops” moment: it was a Vanilla Bean flavor GU. I never buy GU gels (Honey Stinger for this gal!). But I did win a box of them in a raffle at the Pro Athlete meeting at Vineman 70.3… back in 2014. So basically, my nutrition for this run was going to be three years old. Great!

I decided I would only take the GU if I felt an absolute need for calories and carried on.

The first two miles felt good. It was hard, but not impossible to run a low 7-min pace. I guess I was going too fast for the race photographers, because this is the only photo I could find of “me” on the run:

Mile 3 had some minor climbs – over a bridge, nothing noticeable really – but I was already feeling myself slowing down. Well, they do say that most people run out too fast and here I was. I was hoping I could at least keep a 7:30 pace to the end, which would still get me a nice little 10K PR.

But once we passed the turnaround point and were now running in the opposite direction, it hit me. The wind! It felt crazy, crazy strong. I’ve had to do a few of my training tempo runs and fartleks in strong headwind, so I know what running with massive resistance feels like, but this felt doubly hard because I had already been going faster than I should have.

Three-year-old GU to the rescue! I squeezed it into my mouth, swallowed it, and of course from then on all I could think about was how it was sitting in my stomach, wondering if it’s going to make me throw up or worse. Nothing of the kind happened, but the thought was there.

At the next aid station, I asked for water. Then for some reason the hand-off didn’t quite happen, so I stopped and ran a couple of steps back to the volunteer to get it. I was hoping it would dissolve the GU in my stomach, so in my mind, it was worth the loss of two or three seconds. This actually worked, because from then on, the GU didn’t bug me that much and I ran on.

It felt very, very hard. At one point, my pace fell down to 8 min/ mile and I blamed the wind – but by then, my everything was tired, too. Legs, body, brain. Then one last mental test, as we ran right past the finish line, but had to circle around the road, make a U-turn and run back through the chute.

Mind you, the course was a bit short, so I really had no idea how long this “looping away from the finish so we can run back to it” would last.

The run was 6.1 miles according to my watch, so I’m taking my official pace with a grain of salt.

No official race photos of me crossing the finish either (did I run through too fast, too?), but I have this little gem of a facial expression immediately after: 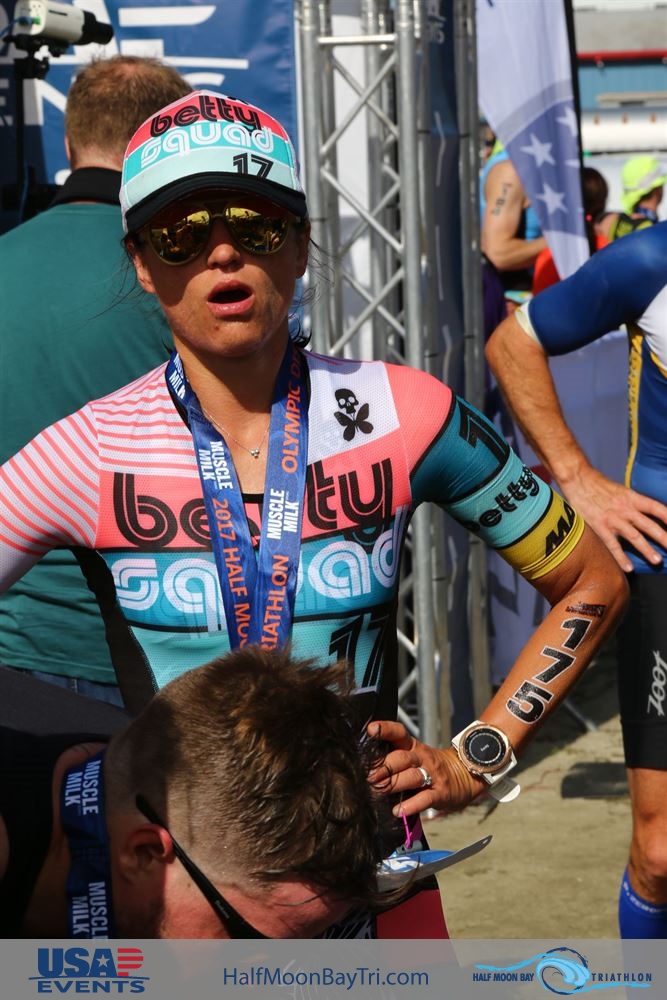 I actually like this terribly unflattering photo. It captures exactly how I feel at the end of every darn race.

And then this one, no more than a minute later, with my friend who was hanging out at the finish already: 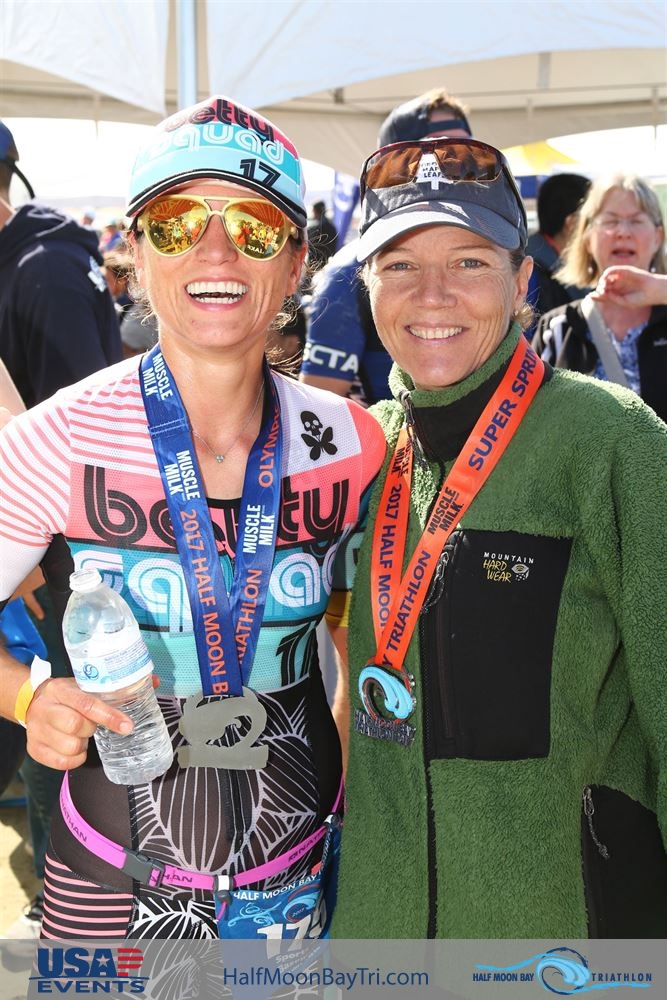 The bipolar nature of triathlon, ladies and gentlemen: suffering one minute, beaming with happiness the next.

We then checked the results and I was quite happy to find out that I did manage to bike and run my way up to the age group podium, after all: 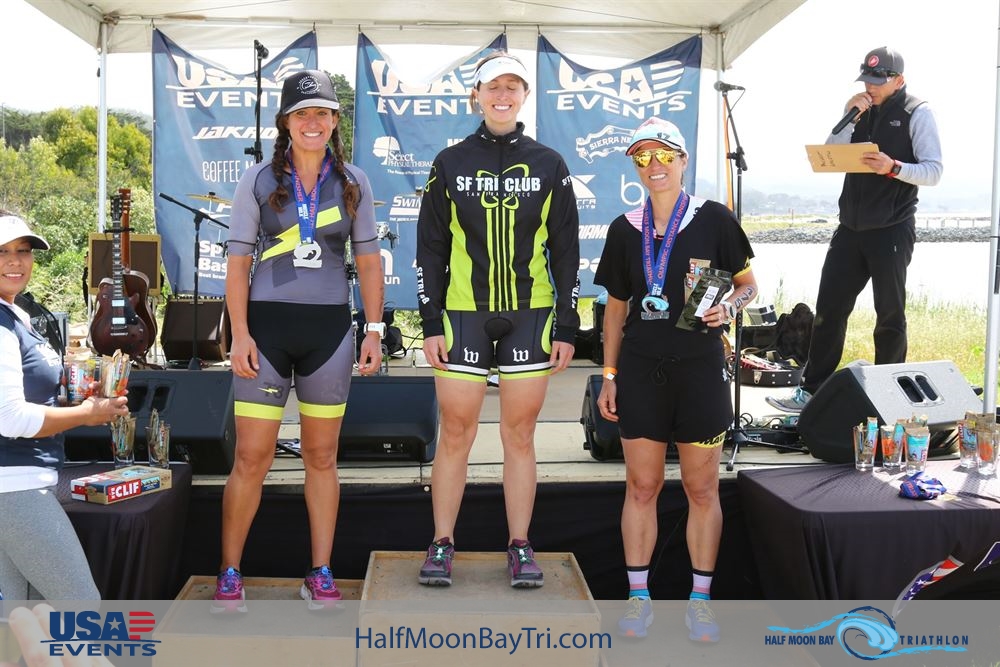 The rest of the morning was fun, hanging out with my training group friends and Betty Squad sisters. Three Bettys raced that day, and three podium-ed. Rockin’!