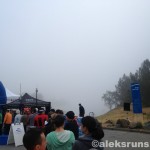 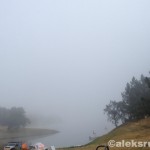 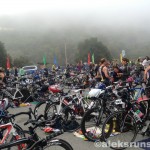 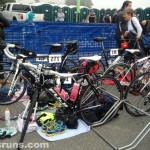 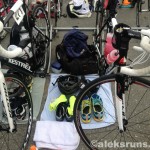 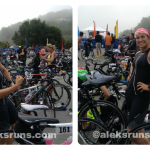 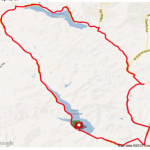 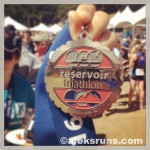 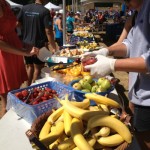 A wise man once said, If you loved your first tri, just wait until your second!

OK, I just made that up, so technically, it’s a wise woman — and listen to her, because she is always right!

I ran the Reservoir Triathlon today — my second sprint distance race — and >>>>I didn’t think it was possible<<< it was even more fun than the first! It was at the exact same location, Uvas Reservoir in Morgan Hill, Calif., but organized by a different company, which was great because the experience was similar and different at the same time.

Here, let it be said that coming into this event, I wasn’t a huge fan of swimming in Uvas. At SVST back in April, the water was cold and my wetsuit, constricting. I got through that swim basically asking myself nonstop, are we there yet? when will this be over?

So this Sunday morning, all it took was one quick look at this fog to convince me that my butt was doomed to become a big popsicle: 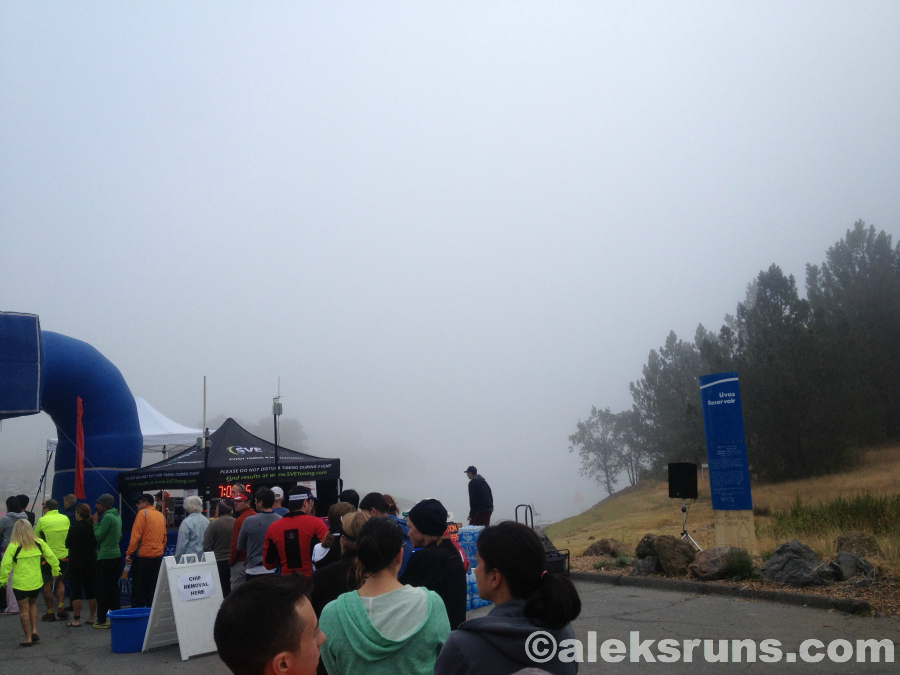 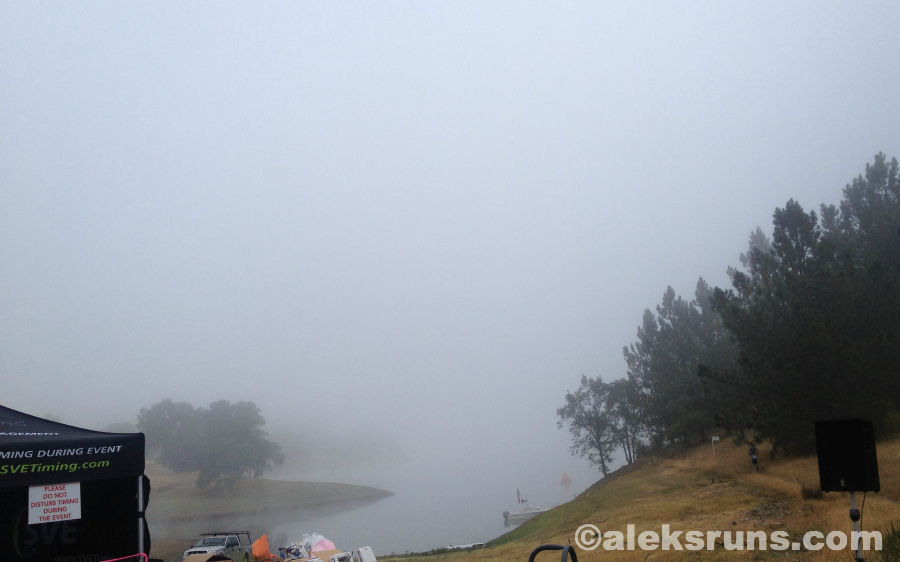 By the time I arrived, the transition area was full: 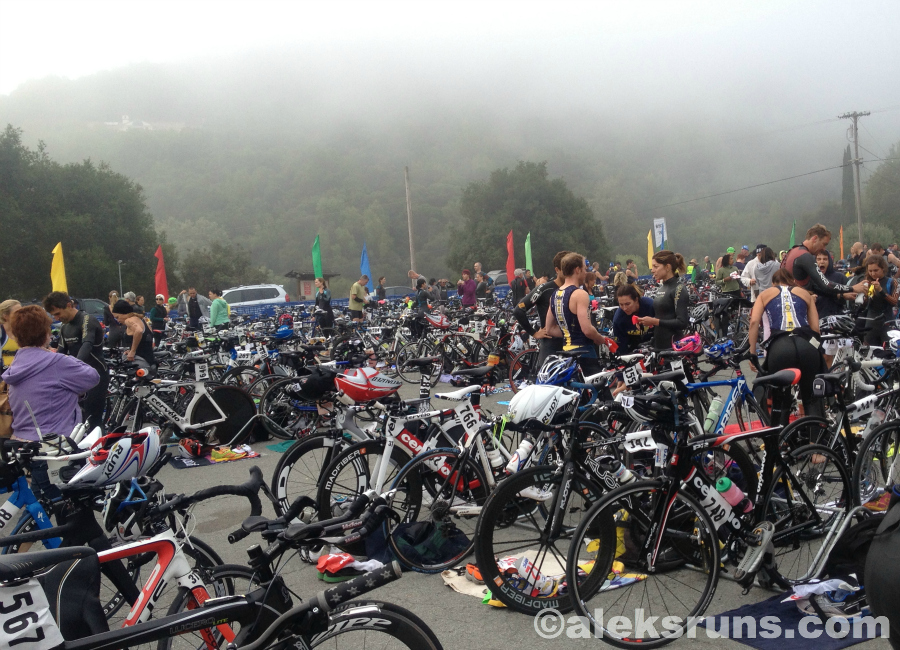 No worries, though, my tri-club buddies had already grabbed the best rack in the house: close to the swim-out area and – this is key – the porta-potties: 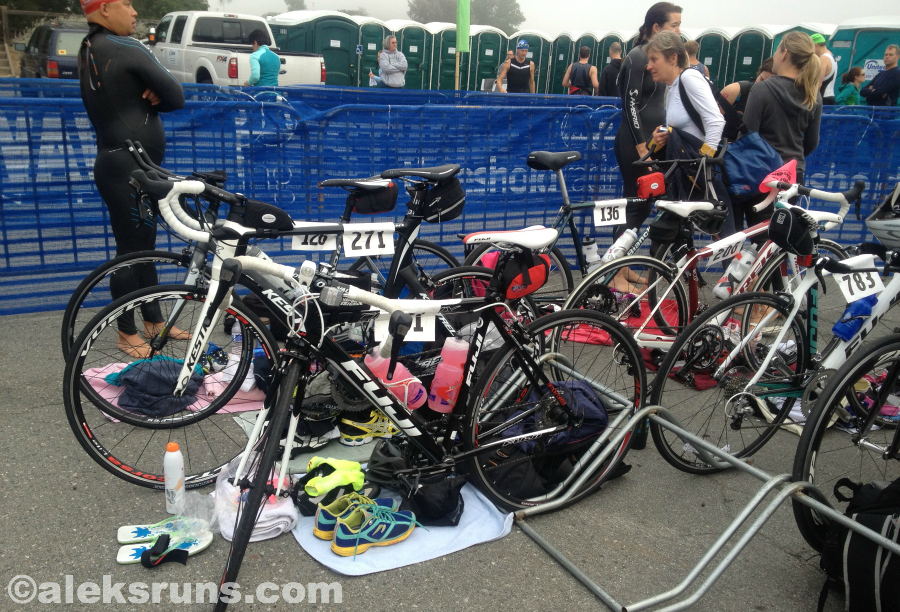 The racks were different than the ones I’ve seen at (the grand total of two) other triathlons: instead of hanging your bike from the saddle, you squeeze in your back tire into a metal brace-like thing, and voila, your front tire immediately swerves to the side: 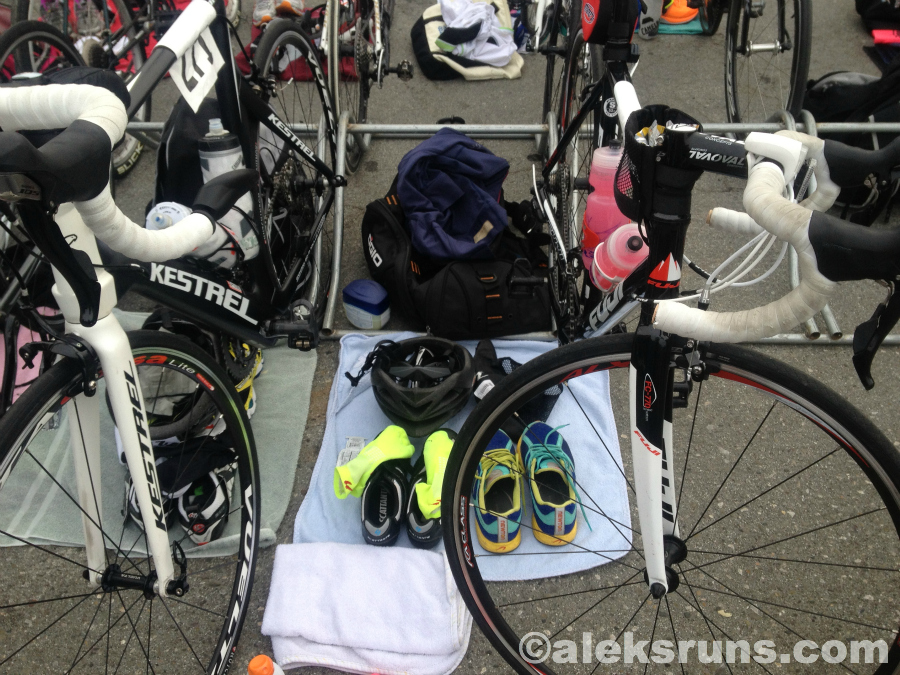 With my bike racked and transition area organized, I headed to the porta-potties – and what do you know, the line was about a million people long. The porta-potties were not enough (not fresh, either, by the way), and the start of the race actually got pushed back by 15 minutes because of that line.

P.S. OK, so the official position was that the reason was fog – but the announcer mentioned that line a few times, too. We were even asked to let all Olympic distance athletes jump in ahead of us so they can do their deed in there and make their start in time.

No worries, though, I wasn’t in a hurry: plenty of time for my wave, and because my bike was so close to the line, I jumped over to grab my race number tattoos and put them on: 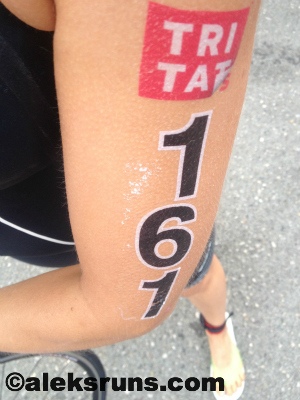 How cool are these, eh? Instead of getting my number scribbled on my arms and calves with a permanent marker, bam: a temporary tattoo that makes me look like I’m about to do an Ironman.

So I did my porta-business, jumped back into transition, put on my swimskin — oh, wait, I forgot to mention I didn’t have a wetsuit, did I? Yes. I was the only person I saw doing this without a wetsuit. The water was 69.5 degrees, the fog still hung heavy over it and I was convinced I’d freeze my butt off. You can’t tell by looking at my happy face though: 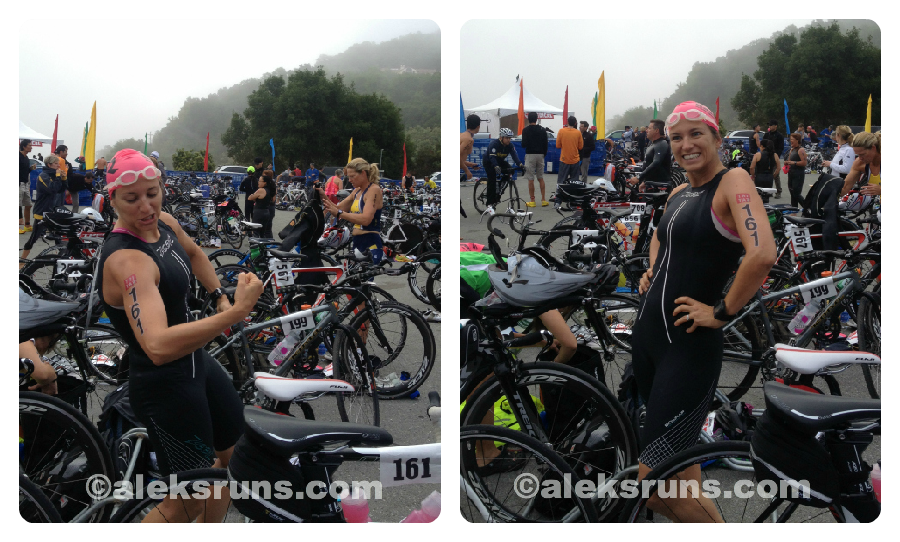 . It doesn’t have neoprene, so it provides no warmth whatsoever, but because it’s a compression suit, it’s kinda sorta supposed to help you be more buoyant (i.e. faster) in the water. And hey, I’m a horrible swimmer, I’ll take any help I can get – as long as it doesn’t suffocate me. It was super easy to squeeze into – I didn’t need any bodyglide, Pam, Vaseline, what have you – and even easier to take off.

But onto the start of the race! This is where my photo stream ends, so you’ll have to make do with my words:

The minute I set foot in that water I knew how wrong I’d been about it. Compared with the cold morning air, it was warm – toasty, even – and quite pleasant. The actual start is quite a ways off the shore, too, so you basically swim to the start and hang out in the water waiting for the gun, just floating. So nice!

I kept to the far side, knowing I’d rather swim a little more and lose time than get hit or kicked in the head. Then we heard the gun and were off. I had a brilliant swim. Amazing. The most pleasant swim I’ve had since I was a kid! I decided to just keep even strokes, sight every once in a while and stay as relaxed as possible. And so I did. It almost felt like the swim was over before I wanted it to be. I ran up the wooden platform taking us back to transition, unzipping my swimskin and taking my cap and goggles off. [The last time I did this, I felt so wobbly out of the water, I didn’t start undressing until I got to my bike.]

Swim Time: 23:30
Well, no kidding it felt easy; that was a full two minutes slower than my first swim at the exact same spot! I guess the wetsuit does help, but on the flip side: I hated that thing and felt awful the whole time. I’ll take two extra minutes, please.

T1: 1:38
Almost twice as fast as last time – 2:53 – so basically I made up for “lost” time by removing my swim stuff and getting out of there faster. I also felt way, way better, which then probably played a big role in the amazingness of the:

I loved every minute of it. The course was different than the one at SVST, so instead of a 16-mile out and back, we did a 15-mile loop. 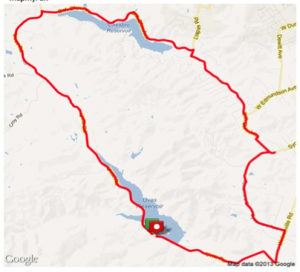 I had only ridden about half of this course before, and many people warned me about the big bad horrible one-two-three suckerpunch of a hill around mile 10.

It doesn’t look that bad on the elevation chart, but seriously: the stories I heard were giving me nightmares. So I headed out on the bike thinking about this hill and wondering: How bad will it be? Will I have to dismount and walk like I heard some people did? Will I run out of steam and fall off the bike? I kept passing people and thinking about it, then people were passing me and I was still thinking about it. Round and round. And round.

Then I got distracted for a while because I was riding with no bikers in front of me and it was so pretty all around that I forgot I was in a race. I quickly came to my senses, though, when I started feeling the infamous climb. I won’t lie, it was quite the climb. I mean, you climb – and you turn. And just when you think it’s over, you see there’s more of it – and when you think that’s over, at the next turn you find out there’s even more.

But it wasn’t deadly or anything? I went into my lowest gear and pushed on, passed two guys (?!?) and even asked one of them:

And onward. After that, a deliciously long downhill, a few small climbs and we were done!

T2: 1:16
I stayed a few seconds longer than I should’ve to drink, then hesitated about taking the bottle with me – decided against it and was off.

I wonder when the run part of a triathlon will stop feeling so awkward because I can’t listen to music. Soon, hopefully! On top of that, my watch – which I got specifically so I can keep track of my pace during events! – had a malfunction and instead of switching between sports like it should (and had, the other times I tried it) just kept measuring everything as “swim”… So I knew my total time, but had no idea how quickly I was running.

More quickly, it turned out, than the last time I ran this exact same course. Which is crazy, because I was purposefully not pushing it (no, thank you, to sore legs with less than two weeks to go before my first Olympic distance!).

The way out was difficult, but considering almost all of it is climbing, that’s not surprising. I also felt like I needed something-something after eating only a few GU chomps on the bike, so the Hammer Gel I got (from my friend Christy, who was volunteering!) was just the thing I needed.

On the way back: downhill + second wind from gel = awesomeness.

I ran through the finish chute feeling great, grabbed my pretty medal: 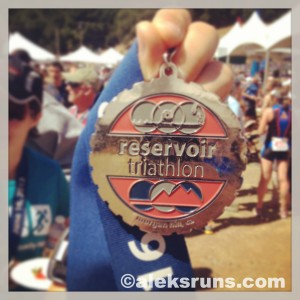 and once my tri-club buds all joined, we headed over to the amazing food spread: 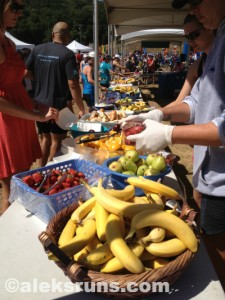 That table was so long, everyone was able to grab whatever they wanted (pizza, bagels and cream cheese, all kinds of fresh fruit) without waiting in line!

Then, as I was stuffing my face with oranges, I heard I placed fourth in my age group. That made me angry at fist – in an “arrrrgh, why not third!” kind of way – but then I saw that the woman who placed third finished a full eight minutes ahead of me and I figured there was no way I could’ve beaten that. Here’s to you, fast ladies who are 35-39 years old!! And to three of our tri-club gals who placed: in the Athena, 30-35 and 55-59 age groups. Whoop whoop! 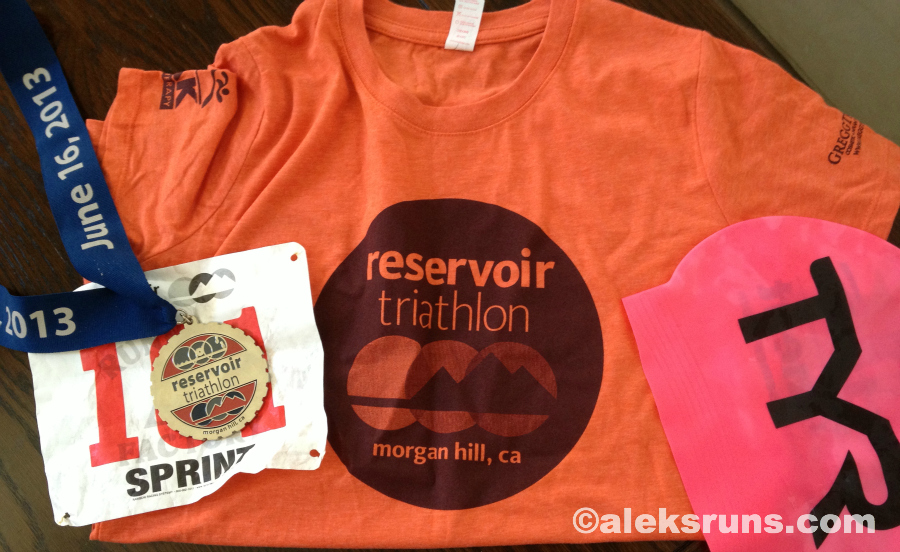 A great event put on by Threshold Events, I will definitely be back for more! Until then: an Olympic-distance triathlon awaits two weeks from now; and next year on March 29: my very first half Ironman (oh yes, I am officially registered!)

Who else raced this weekend? How did you do, and more importantly: how much fun did you have?

7 thoughts on “Hilly Smokes, That Was So Much Fun!”