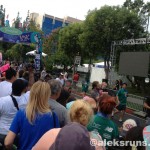 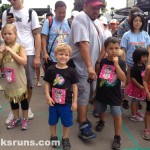 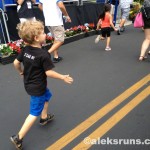 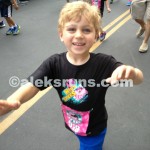 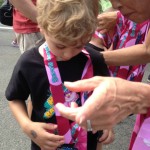 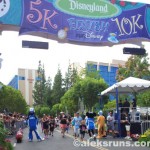 The Disneyland Half Marathon… what can I say, other than humbly admit that I was wrong?

I expected an overhyped, overpriced, cheesy series of events, which I decided to partake in only to “see what the big deal is.”

Instead, I was treated to one of the most flawlessly organized large-scale races I’ve ever run. Now that I think of it, it makes perfect sense: if anything, the folks at Disney know how to deal with large crowds, right? And, let’s see: provide entertainment and fun? Yup!

So, the details… To prevent this from turning into a memoir of War and Peace proportions, I’ll split the story in two parts. This one’s dedicated to the little ones!

We kicked off our official Disney weekend with the Kids’ Races on Saturday morning. The start was scheduled at 10:00 a.m., timed so the 5K and 10K runners were long done with their runs and the Finish area was clear for the kids to take over.

It was a hot, humid day — and the crowds didn’t help the all too toasty feeling! We were advised to be in the start area (the ESPN Zone in Downtown Disney) by 9:30, and quickly realized why: there were 500 kids running the 100-meter dash alone (the littlest ones, ages 1-3), another 600 for the 200-meter (4-6 year olds); and I didn’t hear how many for the 6 and older, not to mention the Diaper Dash, for crawlers.

Safe to say, at least 3,000 people must have crowded in and around the not so very wide streets – if not many more.

We tried to get a better view of the Finish line as we waited our turn, and this is as close as we got: 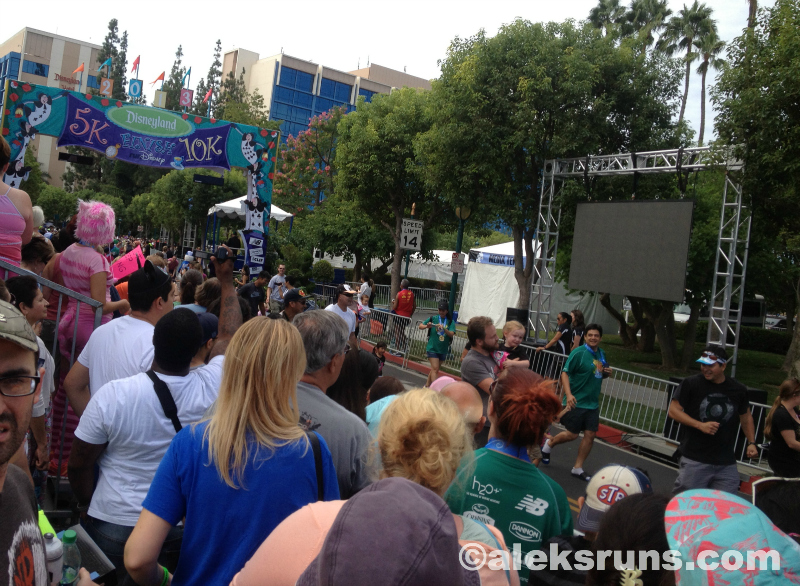 The 1-3 year olds and their parents were escorted toward the start area first, and the races began right on time. Except they took forever! When it was finally our turn to head over, the going was very, very slow. We were told they’re letting the runners go in waves, but didn’t know which wave we were and how long the wait would be.

If you have kids, you can probably imagine how patient 4- to 6-year-olds can be. Especially those near the fence separating the road from the sidewalk. There was crawling under the fence, over the fence, in between the rails of the fence; kicking the fence, shaking the fence… a jolly good time was had by all. [Here is one rare moment of calm, where KidRuns simply refuses to be photographed.] 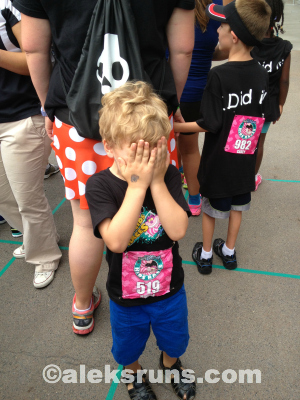 But once we finally got our turn to line up at the start, it all made perfect sense.

They were only letting about eight kids start at a time. This way, not only everyone got to actually line up at the start and be super-duper excited: 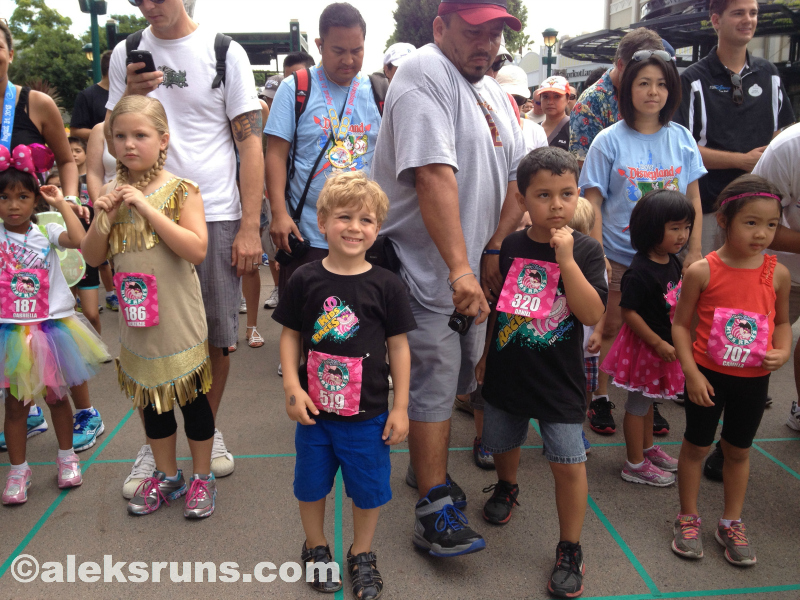 But they got to enjoy the course much more, with so few people around! Check out all that real estate. Have you ever seen this much space at a kids’ run before? 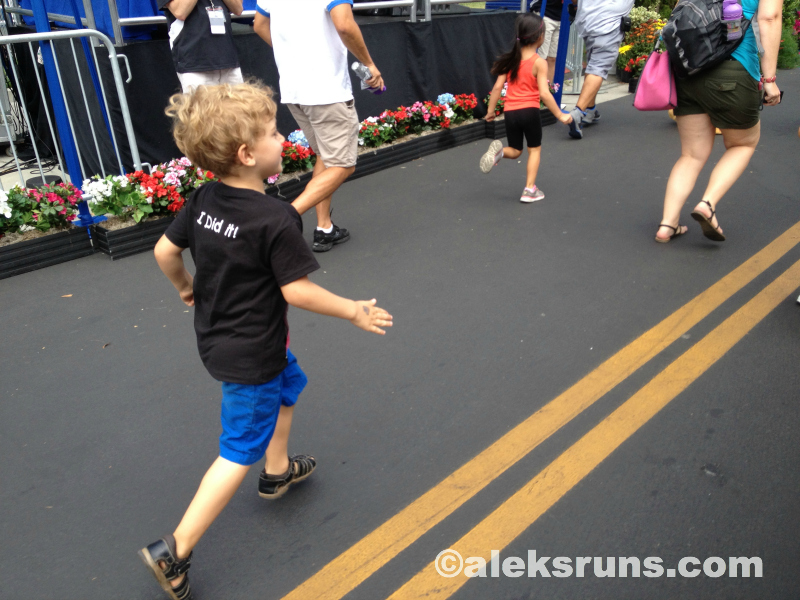 Our Chief Cheerer (Dad) even managed to snap a few photos of us running! 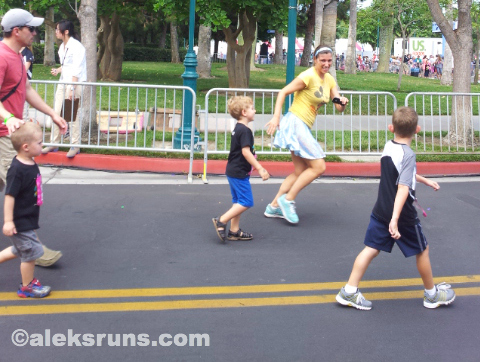 KidRuns had so much fun, he actually said “Awwww, it was too short!” when the run was over…

… and a kind volunteer lady put a medal around his neck: 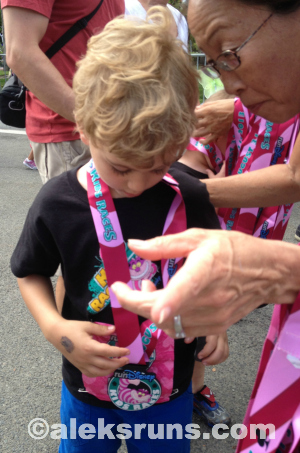 And, of course, his very favorite part was seeing a few special friends right at the Finish line: 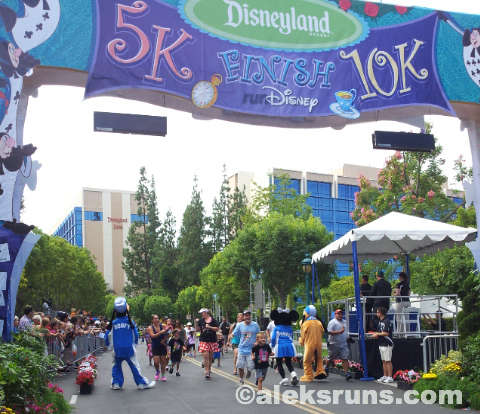 On our way out of the Finish area, volunteers checked each kid’s race number against the parent’s claim tag (or, for those who left the tag in their bags, and the bags with the dads, they asked for ID or a phone number to check against their list). I actually appreciated the strict security — even if that meant slowing us down by another few minutes on our way out.

It was nearly noon by the time we were done, which means we spent more than two hours waiting and a few minutes actually running. But in this parent’s humble opinion, it was well worth it! And I knew, if this level of attention to detail and planning went into the half marathon, it would be one heck of a race. (Which it was, but you’ll have to hear all about it next!)

For those of you who have kids, have they ever done a kids’ race? What did you like (or not like) about it?