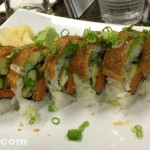 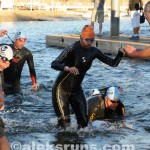 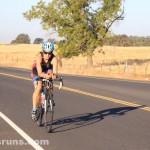 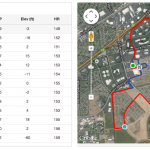 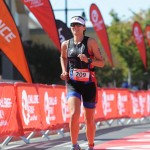 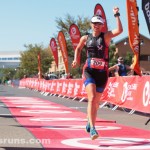 So my Challenge Rancho Cordova race recap seems to have set a record. In procrastination!

Which is a shame because I had my best 70.3-mile race to date. Perhaps the best race to date, period! I loved every minute of it. Freezing my butt off in the pitch-dark transition area before the start. Gulping down some delicious water (drinking quality!) on the swim. Suffering through the frustratingly unrelenting rollers on the first half of the bike — and the fast second half! Dumping ice cubes in my bra at every aid station on the run (that would have any left) to counter the 98-degree heat. Powering through the finish line more than an hour earlier than expected!

Phew! That was a mouthful. It was all fabulous! Here’s the (only slightly) longer version of my day: 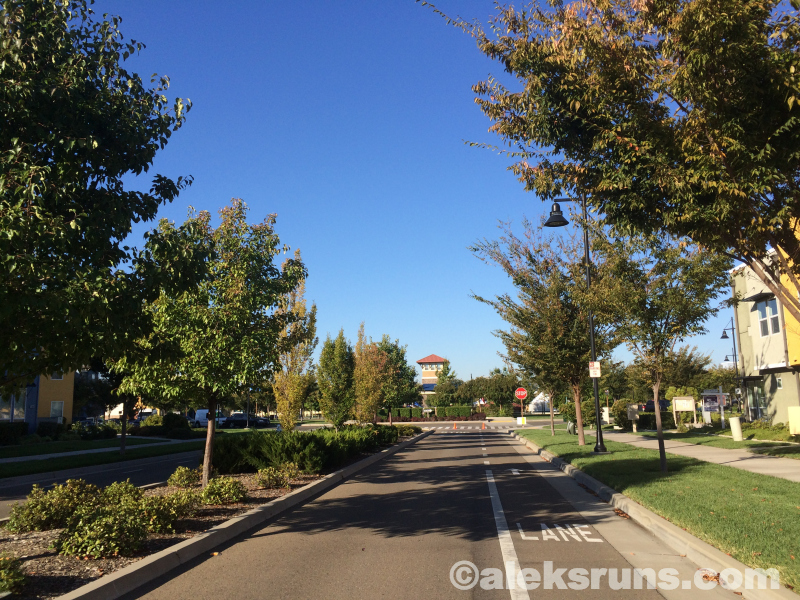 First, you’ve probably never heard of Rancho Cordova. Yeah. The place didn’t even exist a little over 10 years ago. But Challenge Family chose it for their first-ever race in North America, and it turned out to be practically in our back yard… if you can imagine a back yard so large, you need about three hours to get from one side of it to the other. And so on October 3rd, two days before my last half-ironman distance tri of the year, we found ourselves in this “All America City” that seemed to consist of one shopping plaza and several very reasonably priced hotels.

The shuttle to the bike start was a short 10-minute walk from our hotel (told you – tiny place; everything is nearby!). And because I’d dropped off my bike the night before, all I had to drag over there was myself and my wet suit in one of the plastic gear bags provided by the race organizers.

When we arrived at the start (another quick 10 minutes of riding — on a school bus!), it was still pitch dark out. And mind you, I had brought my head lamp on that trip, but left it at the hotel. Smart.

It was also freezing and I didn’t bring a jacket. All I had was a skimpy short-sleeve shirt over my race kit, so I kept walking back and forth between my bike rack and the porta-pots and the (real) bathrooms nearby to keep myself warm.

Since I was already walking back and forth, I also made at least five visits to a combination of real flushable bathroom and porta one. You know, the usual pre-race routine. Gotta stick to those.

Finally, after more than an hour of freezing and potty-going and freezing, I squeezed into my wetsuit — then immediately had to go pee one more time; it’s the law! — and headed to the water. With at least 20 minutes to spare before my wave start. Oh well.

Note to self and to others doing this race next year: There’s really no need to show up at Transition more than 30 minutes before the start. Rack space is assigned by number and the bike set up already. Take the last shuttle possible.

My best pre-race memory happened here. I was chatting with one of the ladies in my wave about I don’t remember what, when another one jumped in:

“I know! I actually thought this was a full-distance Ironman until yesterday!”

For some reason, this totally made sense within our conversation and we found it hilarious. And all three of us laughed and laughed.

Or it could’ve been the race nerves?

At any rate. The scenery was beautiful. The sun was rising. It was simply incredible! The race had a smallish field, a total of about 600 competitors, so my wave was all women age 18 to 39. There couldn’t have been more than 100 of us, I thought. The start felt almost relaxed.

A couple of water gulps too, but considering the swim is in the Numbus Dam area of the American River (drinking quality water), I say this counts as mid-swim hydration.

The only slippery part (literally) was the exit, where a helpful volunteer saved my butt by grabbing my hand just as I was about to slip ‘n slide back into the water, face down. Thank you! 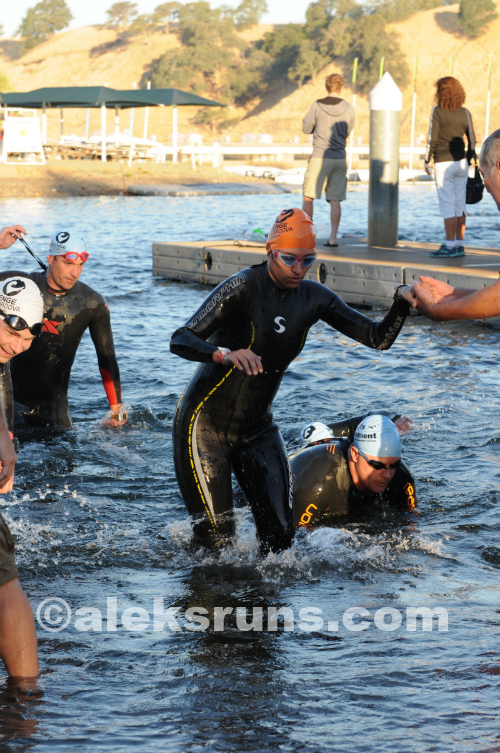 Excellent setup for a speedy transition. Out of the wetsuit, stuff it in the bag, bike shoes, helmet, sunglasses and off we go.
Time: 2:43

Oh…. what can I tell you. The first part was tough! Tough, tough… But mostly it was my fault. I didn’t study the course well enough. Didn’t do a drive-through any of it. Was under the impression that it was flat.

OK, that is flatter than my butt, but you see what’s happening on this bike course? The entire first half is rollers, with a net climb of about 800 feet. That’s nothing over 20+ miles, you’d say. But precisely! It was just such a long time of up and down, up and down, up and down on what felt like (and was, really) a steady, relentless climb. Cruel.

I worried. I doubted. I suffered.

I thought: I don’t feel good enough to keep this up for another two hours and then run a half marathon? I feel like crap?! I feel dizzy with effort? I couldn’t even tell what my heart rate was because my Garmin (again) decided to measure everything as a swim — so I wasn’t even getting any feedback on speed.

Then, of course, came the big descent at Mile 22 and I was like WHEEEEEEEEEE! THIS IS FUN!

Then it seems most of the ride was descending, and all I could think of was I LOVE THIS! I COULD DO THIS ALL DAY!

Rolled into T2 with a huge smile plastered on my face and no idea how fast I’d gone. Faster than I thought, it turned out:

Bike time: 2:55:28
Just six short second slower than my bike time at the Big Kahuna Triathlon, and that was in a relay where I didn’t have a half marathon to run afterwards.

Another stress-free, smooth and speedy one! Challenge Family and USA Productions (the local race partner) had volunteers to grab your bike as you approach, so all you had to do is trot over to your shoes and running stuff and get changed there. No bike to push around and rack! It was almost… relaxing (and I didn’t even have to pee!)

This was a two-loop course, which I was dreading. But it turned out to be the best part about the whole race!

The first half-mile or so was around the little plaza where the race finish area was set up, so we enjoyed live music as we set off on the run. And being able to mentally separate the run in two parts was actually helpful. The first 6.5-mile loop was new to me.

I told myself, Don’t sweat it, girl. You’re simply exploring the wonderful tiny city of Rancho Cordova – no matter how tiny it is – water and ice station to water and ice station. Run as fast as you can manage, dump all the ice you can dump into your bra, take in water and Coke (where available) and keep pushing.

My legs actually felt really good and I was keeping a sub-9 minute/ mile pace. Except the first mile, which was 7:49… but this always happens after a ride. My brain wants to keep going faster than my legs should be going.

[Digressing: Which makes me wonder if this really isn’t a pace my legs should be trying to sustain next time for the full half marathon. The body is the engine, but the brain is the driver – right?]

Anyway, here are my mile splits:

The best part of all? As I was biding my time and freezing my butt off back before the race start, I looked at the run map in detail and noticed that mile six of the course goes right by our hotel. So I texted it to HusbandRuns and told him, come out to watch around 55 minutes (optimistic, I know!) after I get off the bike and maybe you’ll see me!

And just as I approached the aid station near mile 6 – at around 52-53 minutes after I started running, right on time! – who do I see handing out water? HusbandRuns and KidRuns!! I can’t tell you how happy this made me. It has got to be the happiest anyone felt in the middle of a half marathon at the end of a 1.2-mile swim and 56-mile bike, ever.

He didn’t recognize me at first! But then he heard my voice and I stopped to give him the biggest, sweatiest and possibly grossest hug ever. Then I trotted over to HusbandRuns and let him dump two cups of ice directly in my sports bra. Such personalized service at this race!

It was the only time I stopped on the run. The second loop went by in a dream. I was in a hurry to get back to the water station at Mile 6 again and give my men some more gross, sweaty hugs. But KidRuns was helping pour water into cups behind the table, so I just hollered, waved and ran along to get this thing done.

I could already hear the finish line, more than half a mile away, I thought. And when it came into sight and I looked at my watch — and I saw 5:30-something — I was in shock. In this heat, I was expecting a 6-hour finish and had even given myself permission to not feel too bummed if I did 6:30-plus. I was not expecting to see five-freaking-thirty-something!

So my brain told my legs to give it one last push and leave it all out there, on the red carpet:

And so with a fist pump and what I hoped was a smile on my face, I crossed the finish line. Victory is ours! 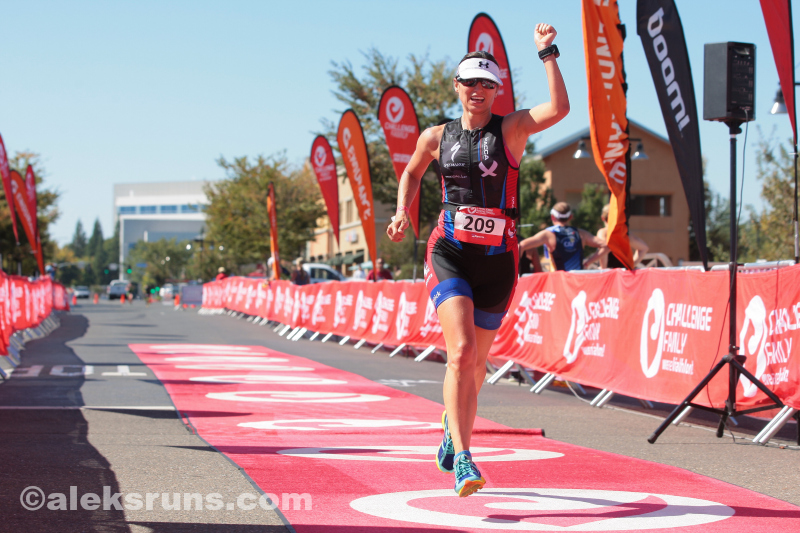 Then I took my shoes off and walked right into a bunch of fountains springing off the ground and it was the best thing ever.

And with a pint (or two?) of draft beer, of course. Now that was something delicious. I reunited with my men right as I was finishing it off and, still barefoot, headed to the car.

It was a wonderful day in Rancho Cordova and I plan to head back there next year for round 2!