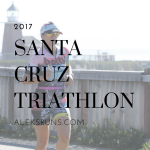 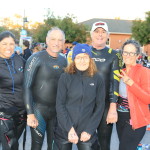 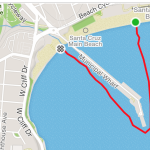 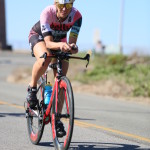 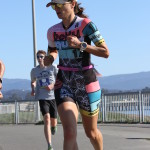 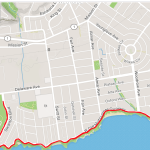 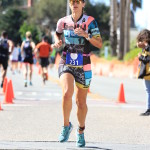 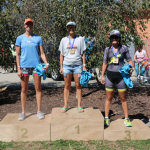 At the risk of sounding self-centered, I must tell you that Santa Cruz is my favorite place to race. Forget about surfer’s heaven. It’s triathlon paradise. Perfect, salty ocean to swim in just past sunrise. The most beautiful rugged coastal views as you ride your bike on California’s famed Highway 1. An amazing run with the ocean on one side and beautiful beachfront homes on the other.

The Santa Cruz Triathlon has been around for 35 years, and is a non-profit race. I like that! Even if I don’t get the most high-quality t-shirt, race swag or post-race food, I’m OK with it because I know all the money that doesn’t cover race expenses, goes back to Santa Cruz community organizations.

This race was actually my second-ever olympic distance triathlon, back in 2013. I fell in love with that course right there, but with scheduling conflicts, did not get an opportunity to do it again until now.

So here I was, four years after my first Santa Cruz Triathlon and one year after I first came up with the concept of a BOGO race, about to do again.

1. A race that you can pull off of the fitness you built training for your key race of the season, which was of similar or longer distance, duration or level of difficulty, and took place four to six weeks earlier. A “train for one, get one free” race, if you will:

Having done Ironman 70.3 Santa Cruz only two weeks prior, the Santa Cruz Triathlon was my BOGO race. 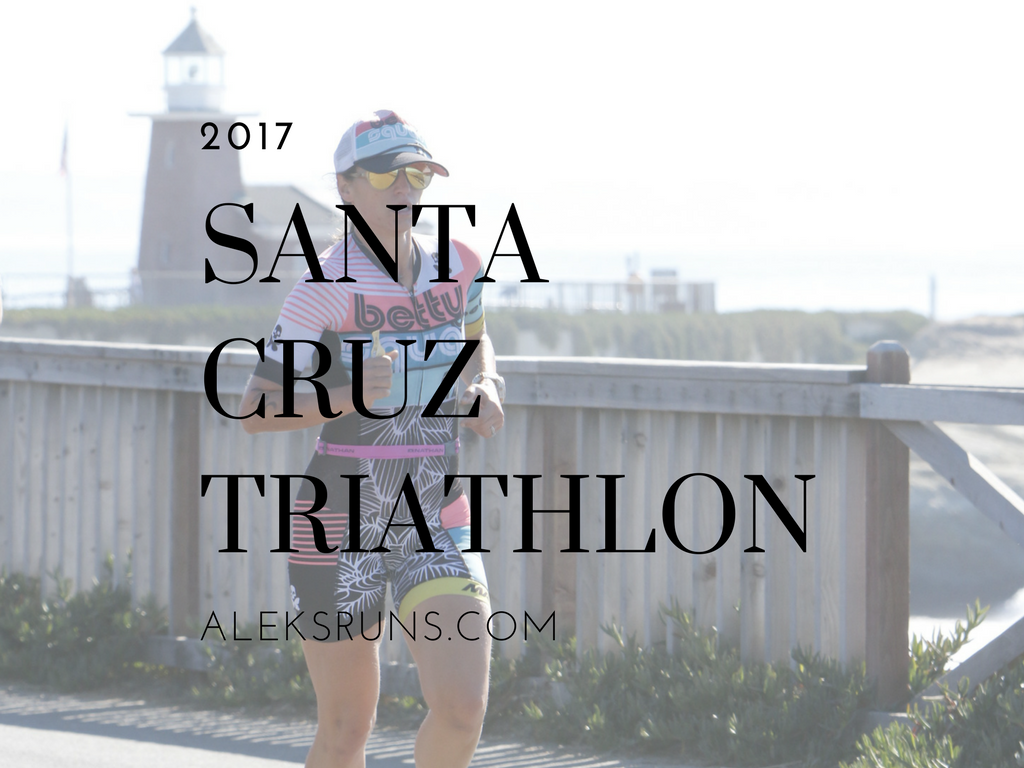 Parking in Santa Cruz is a pain in the butt, so I made sure to arrive at Depot Park a good two hours before the race start. I found a parking spot right next to the Santa Cruz Police Department, which I thought was most excellent – could there be a safer spot to park? Nope. Should I have read the parking signs? Yup. (Spoiler: got a parking ticket. Oh well. More funds for the Santa Cruz community!)

My friend Lisa had just parked a few spots ahead of me and after we spent some time in our cars with the heat full on, we braved the chilly dark morning and rolled our bikes into transition.

As you can see, we are all very tri-couture in wetsuits and jackets. It was still cold and, as many other times before, I was having a difficult time imagining myself jumping into the ocean. Brrr!

It had to happen, though, didn’t it? We headed to the beach around 7:40, I left some shoes by swim-out for the transition run, then walked over to the swim start. I didn’t have time for a “warm-up” swim, and to be honest, I don’t see how it would have warmed me up in any way. I was still feeling all stiff and shivery inside my wetsuit. At least, the air could not have been more different from two weeks prior – not a hint of fog. Perfect visibility. We could see all the way to the pier and beyond.

A beach start is a good thing for this race – it gets your heart rate up a bit, so the cold water doesn’t feel all that cold. Eh… OK, it still does. I wore a neoprene cap under my race swim cap, no neoprene socks and no gloves (lesson learned at Half Moon Bay), so those first steps in the water were quite a shock.

This swim start was a mess. I had lined up near the middle of my wave (I know my swim abilities; do not belong in the front), but I guess I outran some women to the water and dived right into the thick of it. Wow, that was some aggressive swimming? I should be more like that!

I let the first (fast!) pack of women go ahead and settled into my pace. Though, settled isn’t quite the term for it. More like, I settled into feeling unsettled in the cold water. There were no waves – it was perfectly flat, in fact – but I just couldn’t make myself “go”… I felt slow, sluggish and stiff. I kept trying, though, and refused to look at my watch. I sighted often and had to constantly adjust my course because after every few strokes, I felt like I ended up much further to the left than I should have been. The swim course basically starts on the left of the Municipal Wharf, you swim diagonally towards it, around it, and then back to the beach:

It wasn’t until I swam around the wharf that I felt like I got into the groove. Maybe there was a current that made the second part of the swim easier, I don’t know. But I definitely felt stronger and faster (passed a few people, even) coming back.

Swim time: 29:11
(This includes the short run across the beach; my swim-only time was 28:20, according to Strava. Considering I did this same swim in 35 minutes four years ago… progress.)

Long as usual. Run from the beach to the parking lot that was our transition area. I wasted at least a minute putting on running shoes, only to maybe save this much actually running it, rather than the barefoot jog I had done two weeks ago. From now on, I am only doing this transition run barefoot.

I know this bike course so well by now, I feel I could ride it blindfolded. Except, the part along West Cliff Dr – which proportionally is a much larger section of the course than it was of the 56-mile IM70.3 route – is way too technical for my comfort. No sharp turns, but constant turns nonetheless. They make me nervous. Especially considering how some people throw themselves into those with reckless abandon.

No surprises, except at the very beginning: there is a little hill that starts right as you exit bike out, and we were told this time the mount line was on top of it! Yes, faced with this short but steep climb right as you mount your bike puts you in danger of toppling over if you’re not in the right gear (I’ve seen it happen). But must we be treated like kids who don’t know how to handle themselves with a bit of a challenge? As you can tell, I was quite annoyed by this little detail, as running up (and down!) a hill in bike shoes is as far as it gets from my idea of fast or fun.

Other than that, I had an ok bike leg. Not as fast as it should have been, given the perfect conditions. I maintained an average speed equal to my average at the half-iron distance two weeks ago… So that was disappointing. I think I was too cautious on West Cliff Dr and I certainly could have pushed myself harder everywhere else.

Since I started in one of the early waves, the bike course was not crowded, so I had no excuse.

One thing I love about olympic and sprint-distance races is you don’t have to pee by the time you reach T2 (or before!). Just a change of shoes, take helmet off, put hat on and go.

This run starts with a bit of a climb, but once that first bump is behind you, it’s all very gentle rollers along the beach. As usual, I started too fast off the bike, but this time I went with it. My strategy was to hold a tight pace for as long as I can, preferably until the finish line. What’s the worst that could happen – blow up and walk a mile? Worth the risk.

Within the first mile or two, a woman breezed past me like I was standing still. She ended up winning the women’s race. 43 years old. Ran a 43-minute 10K, 6:53 average pace. Goals! (Also, bad news for me, as I join her age group next year. Ha.)

Back to my run, though, the first three miles felt hard, but under control. I dipped the pace to under 7 briefly, but that felt unsustainable, so I backed off. I guess 7:15-ish is my “comfort” race zone these days. It’s a suffering I can tolerate. 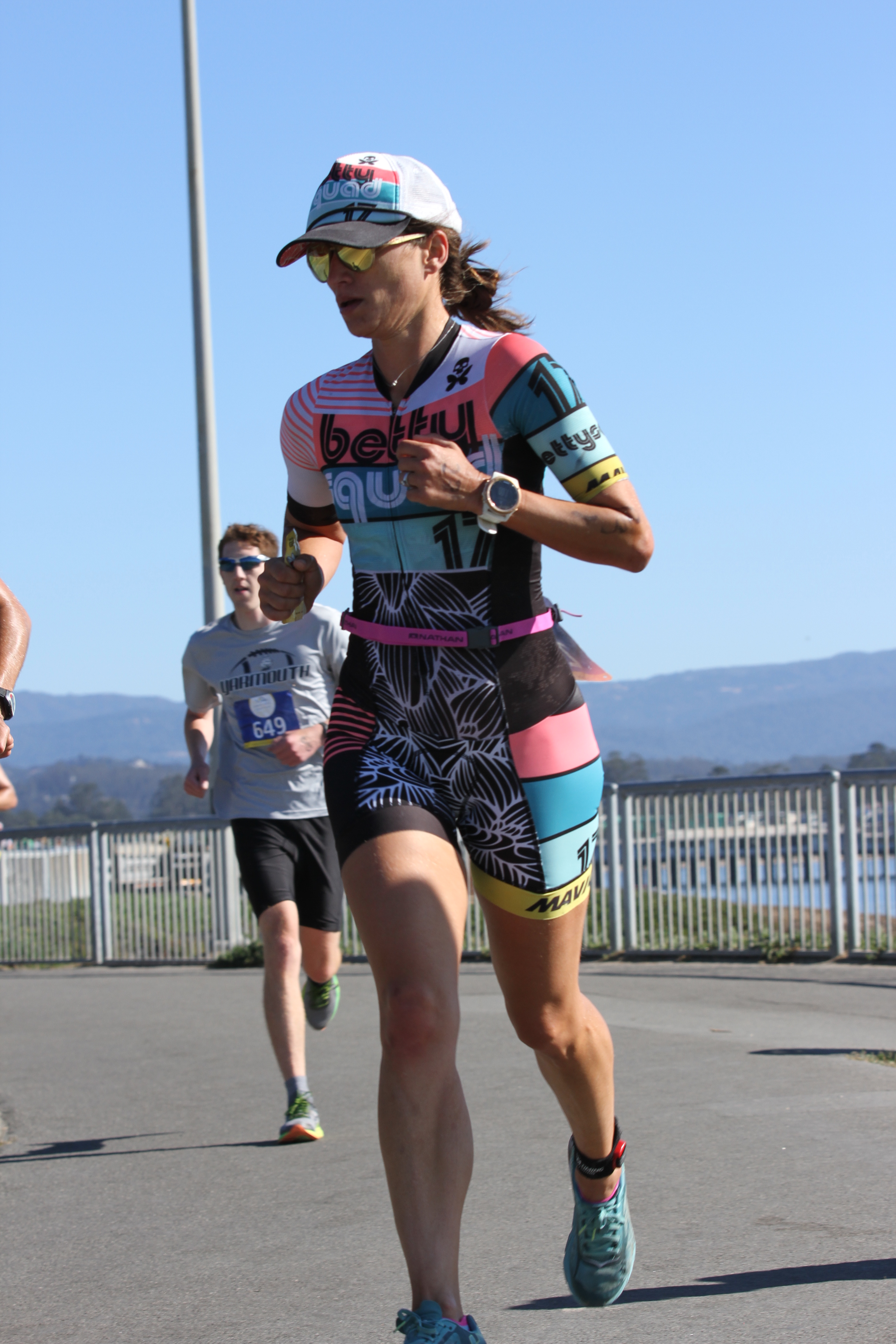 By the turnaround at mile 3.2, however, I was starting to feel less tolerant of running, racing, and life in general. To put it mildly. In other words, time to eat some carbs!

I had a bit of a nutrition hiccup for this race, since on the bike I’d only had half of a bottle with Gatorade Endurance, and occasional sips of Gatorade on the run course. Good thing I had grabbed a Honey Stinger gel out of T2, so down that went. Viva la sugar! The effect was pretty quick and my head cleared up, but my legs were of another opinion. They decided they’ve had enough of this and would like to slow down now. (Probably should have had more water, too…)

The last 100 or so yards before the finish are a solid downhill, and my watch was telling me that I would finish this run in under 45 minutes, so I booked it… Well, later I found out that my official time was 45:05 — but I also found that I won my age group, so I was pretty happy with my run, and with my race overall. 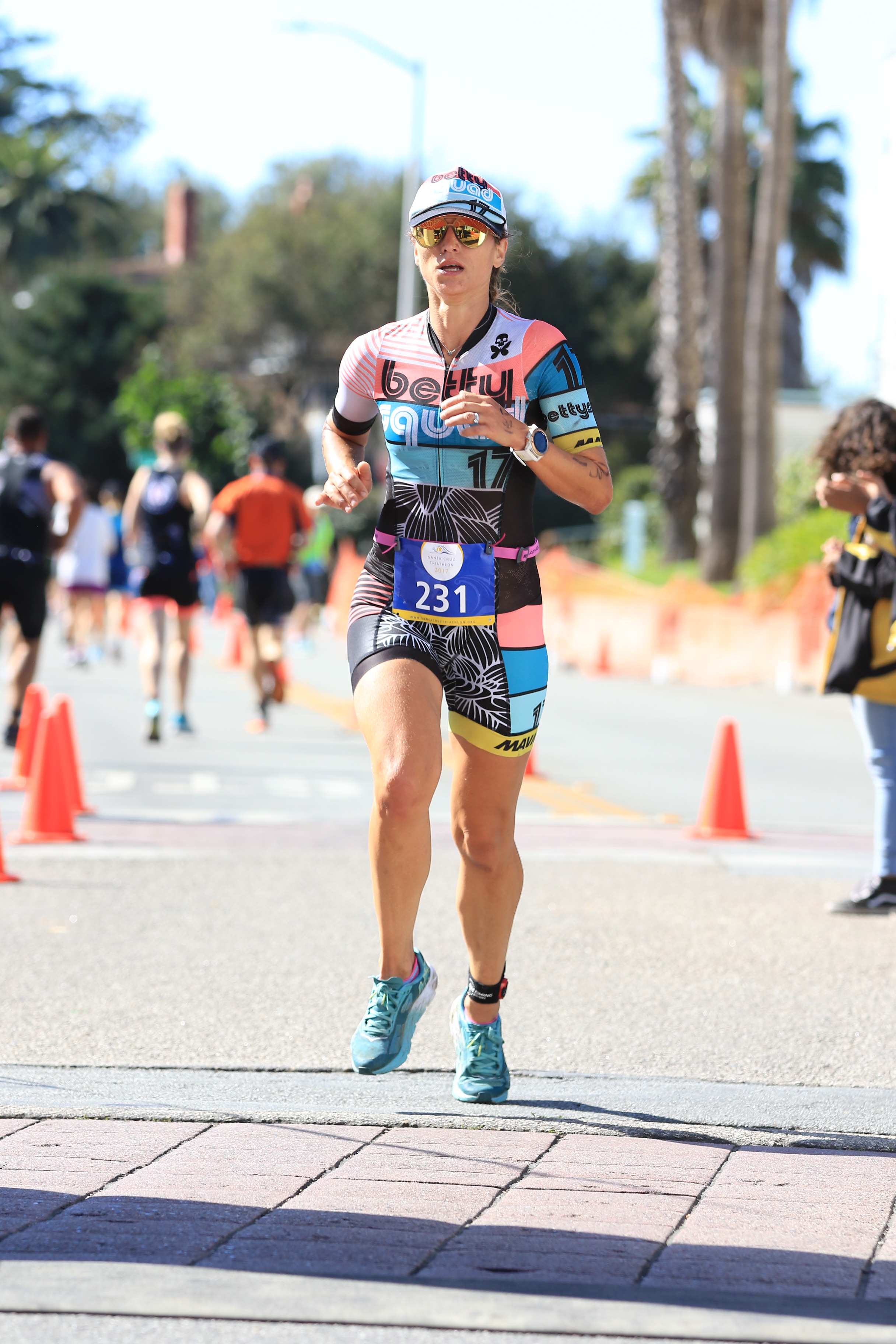 Back in transition, I ran into Lisa, who had done the Aquabike — and soon other friends started arriving as well. We waited around until the awards ceremony. It turned out a whole bunch of us placed in our age groups — sweet!

To toast the end of tri season 2017, our little group had lunch at Riva Fish House on the pier. Great food – huge! portions – and local beers on tap. Winning!

So that’s a wrap for this year of triathlon, folks. Don’t park by the Santa Cruz Police Department for more than two hours at a time, OK?