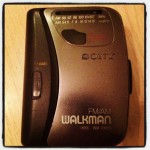 Some runners swear by the purity of listening to nothing but the sound of their feet pounding the pavement. Feeling one with nature, at peace, all that.

Me, I’ve been the music-blasting/ run-to-the-beat type from day one. First, holding a bulky Walkman (or clipping it to my sweatpants, but then I’d have to tie a shirt on top of it because it bounced too much).

In fact… today is your lucky day, because I still have that thing and have risked life and limb to retrieve it from its top-shelf placement in the garage:

And – ohmigod! – the last cassette I ran to was still in it!

But I digress. (Can report on what’s on that tape later, though, if anyone’s interested.)

Now, the iPod-mini era of the mid-2000s was nice. That little thing fit just right in the tiny pocket on the side of my running skirt and I could all but forget it was there. I’d love to show you a photo of it, but several weeks ago, it magically disappeared somewhere in the car and I’m still waiting for it to show up.

So, these days, I velcro my iPhone around my arm with this thing — not meant for people with slender arms, mind you, I got me a decent amount of meat on mine and the armband still slides off a little bit.

The point is, I can listen to pretty much anything I darn wish on Spotify ($9.99/ month for mobile access, totally worth it). And so, of course, I have several running playlists — each with its own purpose, be it a specific distance or pace. I update them constantly and am always looking for new great music to run to. (Which is where you come in. What songs or artists should I add? Cool Spotify accounts to follow? Let me know in the comments!)

Boston Marathon Playlist
[Edited: May 2016. Below is a playlist I built over the years to match my slowly improving marathon race pace, from a 9 min/ mile back in 2013, to the 8 min/mile I was hoping to average at the 2016 Boston Marathon. In the end, I ended up averaging 8:30 min/mile — but blame it on the hills and heat/ wind, not the songs :-))

Fun on the Run, 5M
As its title suggests, Fun’s hit album Some Nights has just the right amount of oomph for a fun four- or five-mile run (or shorter, if your pace is above a 10-minute mile).

At the Races: 13.1
42 songs, 2 hours: perfect for a half marathon, with favorite tunes from Jay Z and Beyonce, to Outkast and, of course, the “get over a slump” anthem: Savage Garden’s Affirmation! (Lots of G. Love and Donavon Frankenreiter there, too… might want to skip over to the next one if surfer-dude music isn’t your thing.)

Run 26.2
Like the distance, this is my ultimate playlist. With 82 tracks going over five hours, it’s long enough to take you from Staten Island to Central Park, or the course of any other marathon without repeating a single song… Or just play it on shuffle on your training runs and never get bored!