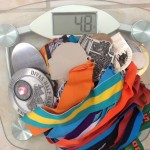 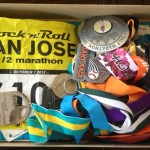 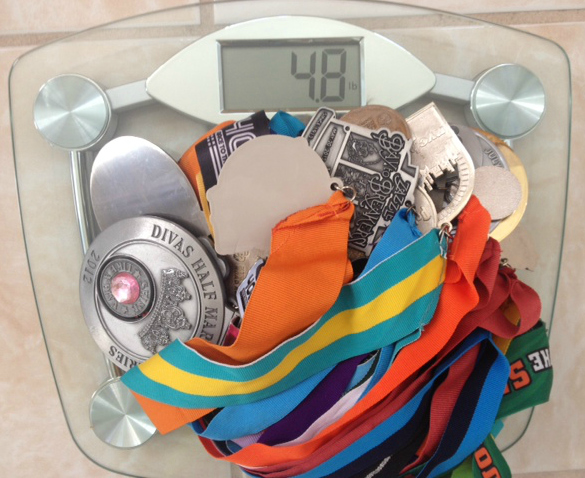 I have 4.8 pounds of metal – er, medals – in the house. Well, in reality, they live their unglamorous life a box:

… and only see the light of day for the few seconds it takes me to stuff yet another one in there.

Sure, I enjoy getting and wearing my medal after a race. But a day later? It’s boxed in. Forgotten.

Oh, wait! There is one exception! We threw a disco-theme party for a friend’s birthday and decorated our place with all the bling we could find around the apartment, which included my medals. (That was a good number of years ago, as you can see, there were a lot fewer of them):

Indeed, what you see here is a pile of Tiffany boxes. Sigh.

I did not get in this year’s Nike Women’s Marathon. Because, is it really any surprise that this race is so popular that they pick the 25,000 participants via lottery?

The Nike Women’s Marathon is best known for the fact that at the finish line, in lieu of a medal you get a Tiffany box with a silver Tiffany necklace inside. No less, it is handed to you by a buff San Francisco firefighter wearing a suit. Sigh. Sigh. Sigh.

Now, that is the form of bling I would not only wear with pride on race day, but every day. Who wouldn’t?

Granted, handing out jewelry instead of medals would work for women’s races, but at co-ed ones male finishers would likely balk. (Though really, guys, would you mind getting a nice piece of bling and giving to your wife or significant other? That would be so nice.)

That said, given the increasing popularity of women-only half marathons and marathons, I say there is no time like the present for us girls to stand united and demand some wearable bling.

I do realize that may be more expensive for race organizers than ordering “simple” medals. Sam Fiandaca of Brazen Racing, a race organizer in East and South Bay, recently told me that the medals for his races cost, on average, $5.50 a piece. (Brazen Racing is known for its super-cool medals, by the way. Check them out here.)

Obviously, a Tiffany necklace costs more and unless Tiffany sponsor other races, purchasing one for each participant is not an option. Tiffany is the official sponsor of the Nike Women’s Marathon and Half Marathon, which explains how they can hand those out and still have a fee of $150 for the half, $175 for the full. (And yes, I also think this is expensive, especially the half.)

I’ve been looking for races that give out jewelry instead of medals and have so far found three series with a total of 12 races/ 11 locations. I plan to do at least one (hopefully, more!) of these next year:

1. Zooma women’s race series, with half marathons in Florida, Texas, Annapolis, Cape Cod and Great Lakes.
You get a pendant, different for each race.

2. Lady Speed Stick Women’s Half Marathon series, with races in Bloomington, Nashville, Scottsdale, St. Petersburg and San Diego. You get a two-piece medal, one part detaches and becomes a pendant.

3. Nike Women’s Marathon (and Half Marathon) with the proverbial Tiffany necklaces, of course, takes the gold medal in the “coolest race souvenir” category.

Do you know any other races that reward finishers with jewelry? Let me know so I can update the list!