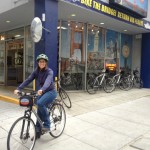 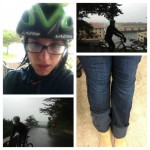 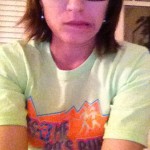 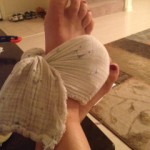 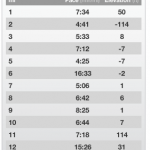 Today, I learned a lot while riding a bike for 12 miles in San Francisco.

If Google Maps says it will take you 30 minutes to bike a certain distance, they are referring to experienced bikers like my coworker Drew.

Drew very kindly volunteered today to accompany me from our SOMA office to the Sports Basement in the Presidio, to pick up my race number for the Awesome 80s Run on Sunday.

I was super excited to rent a bike from Blazing Saddles and get going on our five(ish)-mile ride to the store: 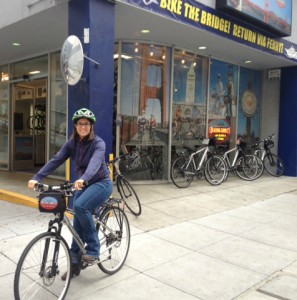 Drew gave me a few quick and essential tips on biking in San Francisco (seeing how this was my first time ever doing it).

If you’ve never biked in San Francisco, starting out on a busy street with cable car or light rail rails isn’t ideal.

Keep away from the railings, or else your tire can get stuck in the gap and you will flip over. Drew actually told me this, and I heard it loud and clear.

It didn’t hurt much, though, and seeing how this happened within our first mile and we were on a mission, I just picked my booty from underneath the bike and carried on. 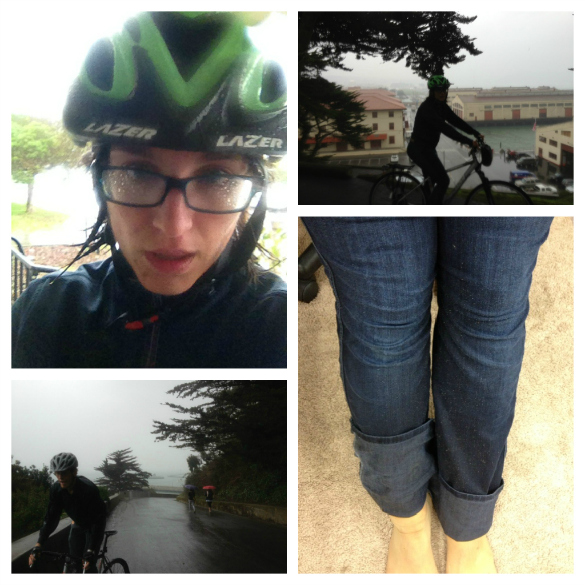 Check the weather forecast before heading out for an hour-long (or more) outdoor activity.

Luckily, I was wearing my Skirt Sports 0:05 jacket

, so at least my upper body felt warm — but I was soaked through and through. My entire back was covered in sand – apparently thrown up by the bike as I scooted through puddles of muddy water. Fabulous!

When taking a bike trip somewhere, check when you actually have to be there, eh?

There were four or five other people there already, and we actually had to wait for four minutes before we were officially allowed to pick up our numbers. Rules are rules! (But when you’re dripping wet, they can make you cranky.)

On the flip side, there was a choice of T-shirt color; purple or green (you can see both in the photo above). I look hideous in purple, so I picked green.

Another five rain-drenched miles later, I got back to the office and broke the cardinal rule of racing. I put on my race T-shirt before having run — let alone finished! — the race. The horror! 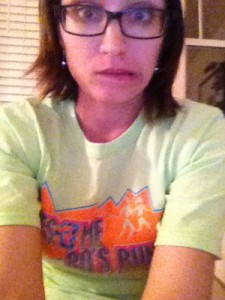 When you’ve had a particularly rainy bike ride, it’s OK to break the rules!

I dried myself fairly quickly with a space heater, then realized I cannot walk.

My right foot – the one that ended up underneath the bike after my fall – is slightly swollen on top and hurts when I put weight on it. [In the photo, I’m icing it.]

The ankle is fine, which is a shame because I know exactly how to rock-tape

that and run through the injury.

Now I may need to limp through a 10K on Sunday, then have to see a doctor if it still hurts and figure out how to deal with another 10K on Thursday and a half-marathon on Saturday.

Really, sometimes when it rains, it pours.

On the flip side, I think I got a pretty good idea of what training for an Ironman feels like?

How was your day? Any tips for my next bike ride in San Francisco?

Mile 6 includes a 10-minute (or so) stop at Sports Basement; the last mile and a half was a walk from the bike rental place to our office. Overall, we made very good splits, considering the traffic, the accident, the rain and the fact that every time we got too close to a car or went downhill, I hit the breaks like the wuss that I am. 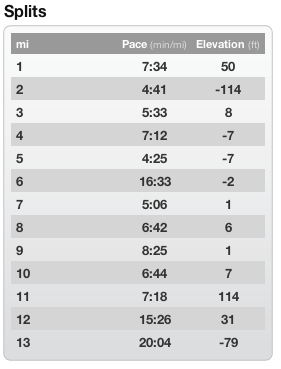 One thought on “Riding a Bike in San Francisco”