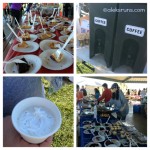 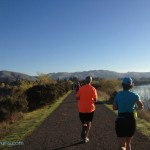 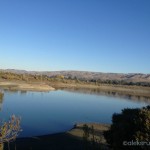 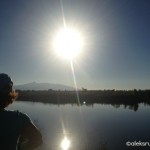 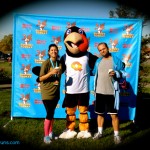 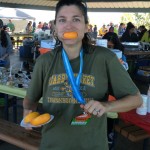 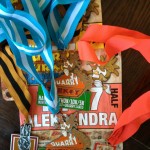 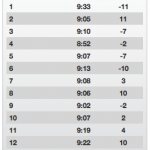 I’ll get ahead of myself here, but I can’t not start by sharing the type of post-race food you get when you do a Brazen Racing run: 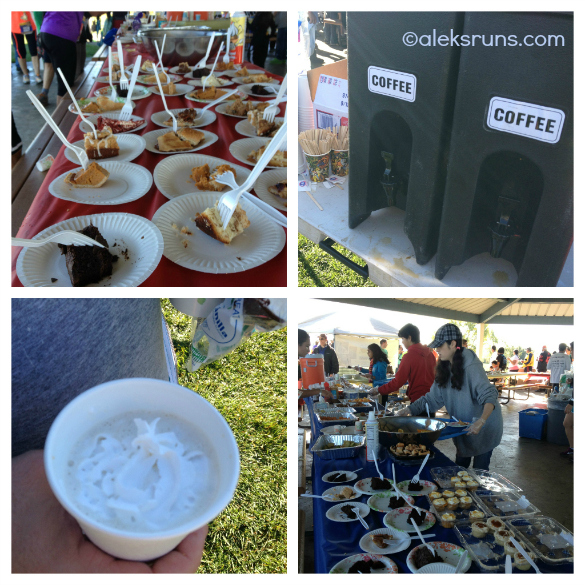 This is the second Brazen half marathon I’ve done and the treats are consistently amazing. Pies! Cupcakes! It’s It ice cream sandwiches! Coffee with whipped cream!

Oh. You mean you wouldn’t run 13.1 miles for coffee with whipped cream? OK. Let’s start at the beginning, then.

If you run a Quarry Turkey race next year, give yourself at least a 30-40-minute buffer on your planned travel time! Entering the park is super slow, as the Park Rangers are in no hurry to take the $5 parking fee from each vehicle, print a receipt, yada yada. Nothing Power-Ranger about those park rangers for sure.

On the flip side, we had plenty of time to enjoy the sunrise:

See the river? There was a super-low lying fog stretching all over it, as far as I could see. Like the water was too hot for the air and steam was coming out. What was that? [Must research.]

Unfortunately, we were late for the Little Turkeys Race, so BabyRuns didn’t get to run. Fortunately, he couldn’t care less. All he wanted to do was throw rocks in the lake. And the race volunteers were kind enough to give me a medal for him, which he will receive one of these days after a self-staged run or something.

A quick visit to Mr. Porta Potty (actually, I used the park’s restroom, with sink and flush and all. Luxury rivaling the Waldorf-Astoria!). Then it was time to head to the start area:

The Brazen Racing runs are smaller events, relatively speaking. I don’t know the exact number of runners in this one yet, I’m guessing no more than 200 for the half.

Because of the race’s location, though – most of the run is on trails and the start is on a lake path that can fit three to four people across – the first mile felt pretty packed.

Once the runners spread out, all I could do was breathe in the fresh air and enjoy this view: 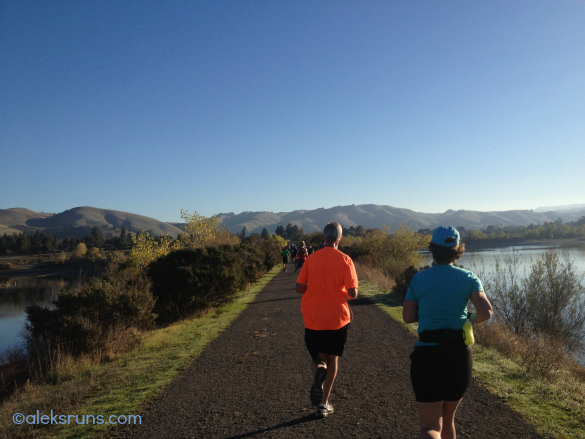 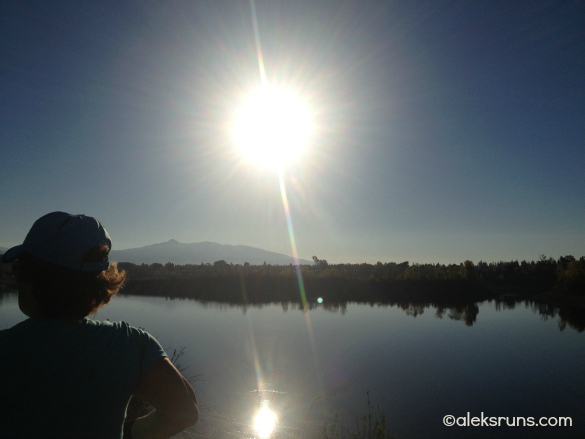 I felt great for the first 12 miles. The course is pretty much flat, with the occasional under-bridge pass. It was maybe 70-30 dirt path to road running. I love me some dirt paths, but road runs still feel so much easier.

I wish I’d at least looked at an elevation map in advance though, so I would’ve known that the last mile is kind of uphill. I pushed through, and – I kid you not – within sight of the finish line, I basically ran out of gas. For real, I had to stop and walk, leaning at least half my weight on HusbandRuns, who “ran” the last 100 yards or so with me.

Note for next year: bring an extra PowerGel (or get a GU packet from the aid stations) to eat around mile 11.

No AG prizes for me. HusbandRuns, on the other hand, took home the bronze. Truth, he placed third in his age group for the 5K and got a special medal. Have I mentioned he doesn’t like running and basically runs once every two months?

Here we are, before we even knew we had a winner in the fam, but I used a whole bunch of special effects on the photo, regardless. 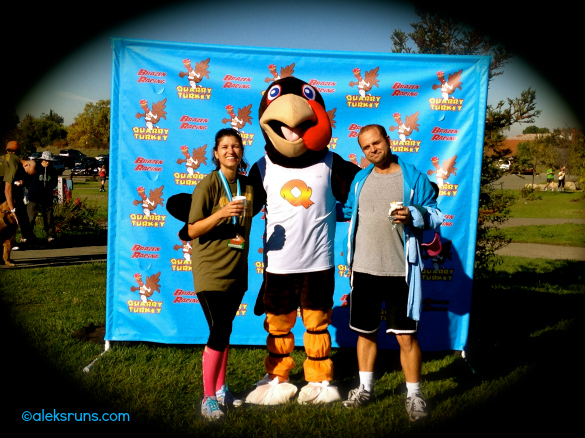 I’m holding my third cup of coffee and HR’s got my ice cream sandwich. I passed on all the pie and ate just a few bites of ice cream. The orange slices, on the other hand… 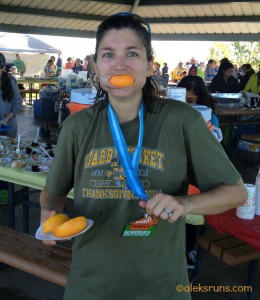 The medals were cool: 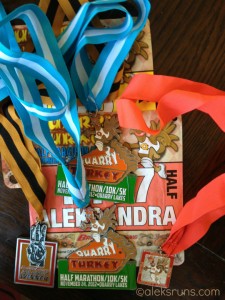 And the race was organized perfectly. (The hold-up at the park entrance was not Brazen’s fault and they did wait an extra 15 minutes before kicking off the runs, so the majority of people most likely made it to the start on time.)

There were mile markers at each mile, plenty of water stations (I didn’t count them, but one every two miles?), GU and a Gatorade-type drink. At mile 10, it tasted delicious.

But the best part of this race was the location, for sure:

And, not least, my pathetic final split: 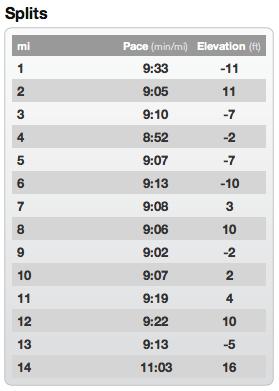 4 thoughts on “Quarry Turkey Half Marathon: Best. Food. Ever. Oh, Race too!”