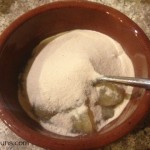 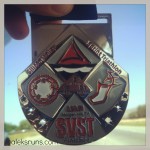 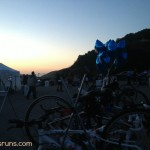 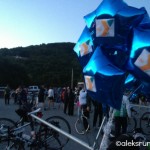 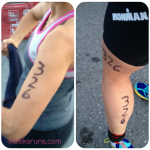 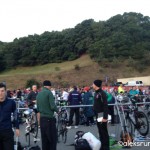 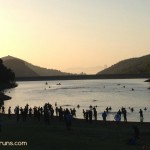 The best part of doing something for the first time is how new and exciting it is, not to mention perfect. After all, you have nothing to compare it to — it’s incomparably great.

But, let’s not fool ourselves, the truly best part of a “first” race is you set an automatic PR!

But what matters most is I had a blast and have already planned our next event — which tells you all you need to know about the allure of triathlons. The end. 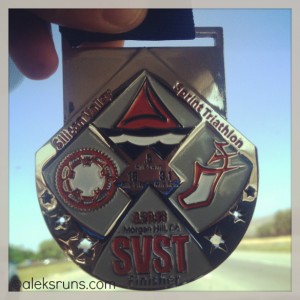 Pre-race
Wake up call was at 4:30 a.m. Ugh… The one downside to triathlons is you have to show up at least an hour and a half before the official start, to get body-marked, rack your bike, ogle at the fancy tri-bikes, set up your transition area, attend to the port-a-potty several times and wiggle into your wetsuit.

So yes. My wave start was at 8:01 a.m. — and I woke up at three and a half hours earlier. That meant rethinking my usual habit of starting anything shorter than a three-hour workout on an empty stomach: 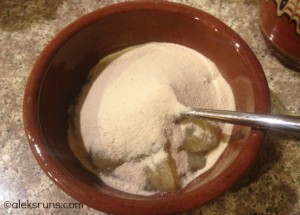 What is this powdery goodness, you ask? It’s applesauce with a scoop of vanilla protein powder and I’m glad to say it tastes better than it looks. I’ve been testing it for a while and it is now officially my go-to pre race fuel: goes in easy, feels as light as a gel, yet it sates you for a few hours because of the protein.

We left home around 5:10, so we can get to the race by 5:45. The transition area opened at 5:00 a.m. and we wanted to be there fairly early to grab good spots. And because I was doing this with my tri-club, we grabbed a whole rack: one in the corner so it’s easy to find, close to the port-a-potties, swim exit and the race finish.

(And yes, it was that dark when we got there.) Here’s my bike, racked and ready: 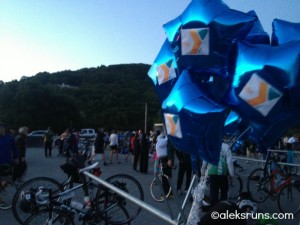 Balloons are a great way to mark your area so you can find your stuff easily out of the swim and bike (but no, I didn’t think of bringing them – one of the many advantages of doing stuff with a team!)

We wasted little time before heading to get body marked. For some reason, I was ridiculously excited about it? 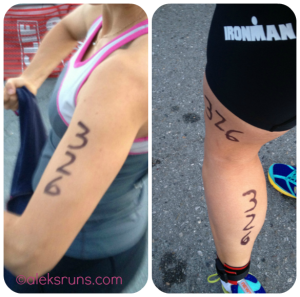 By then, daylight had come and the transition area was getting busy. 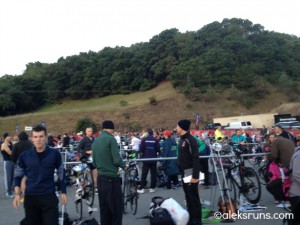 There were two events on that day: a long course and a sprint. I thought the long course was an Olympic distance (1500 meters swim, 40 km bike, 10 km run) but no: it was a half-ironman distance. That’s 1.2 miles swim, 56 miles bike and a half marathon! The long course start was an hour ahead of ours and we watched a few waves of wetsuit-clad swimmers take off. 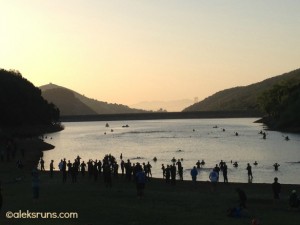 It was still so cold, I couldn’t imagine setting foot in that water! The first guy out of the swim was done in something like 20 minutes, which was roughly how much it took me to swim just half a mile! Oh well.

Then it was our turn to wiggle into our wetsuits (so sexy… NOT) and begin our swim-bike-run journey.

Stay tuned for more on our race adventures in the next few days!