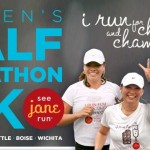 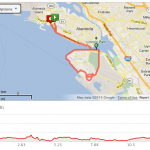 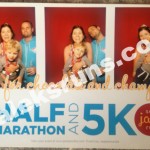 We all have our reasons for running. I first started as a way to lose some (imaginary!) weight.

[In reality, I was in high school and weighed all of 90 pounds. Oh well. We’ve all been there, haven’t we?]

Before long, I discovered the effect of endorphins — not that I knew exactly why running made me feel so good back then, but it sure did! — and I was hooked. Oh, and the imaginary weight materialized, but in the form of lots of muscle. Go legs!

But the best part of running, I find, is that I can treat myself to whatever I damn wish. Namely, chocolate. And sweet sparkling Moscato D’Asti – so what if it’s made of 60% sugar? 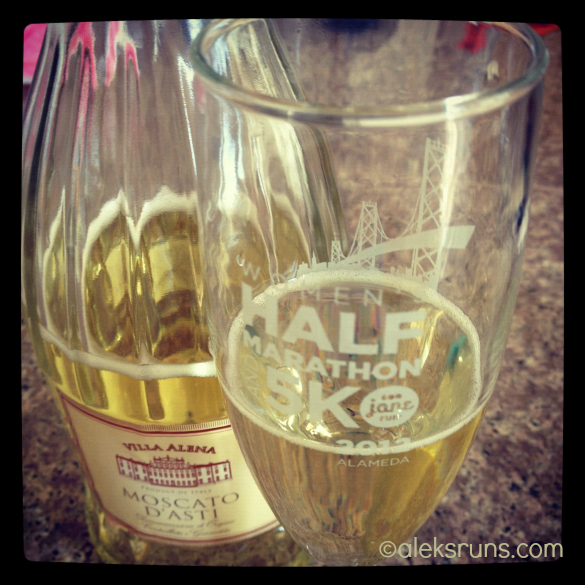 Yup, you could very well say that I run for chocolate and champagne.

Which is why I was so excited to find out I’ve been chosen to be a See Jane Run ambassador. You see, See Jane Run’s moto is I run for chocolate and champagne — it’s what I’ve been saying all along! 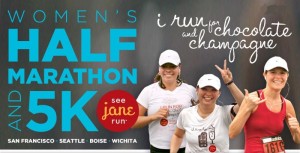 See Jane Run, in case you haven’t heard of them, is a women-owned, women-run athletic apparel company, with stores in San Francisco, Oakland and Danville, Calif.

Aside from their great collection of women’s running stuff (from shoes to clothes and accessories: anything you may need to feel and look awesome on the run), SJR also throw a number of half marathons, 5Ks and triathlon/ duathlon events throughout the year.

I ran the See Jane Run half marathon in Alameda last year and enjoyed the race so much, that I signed up for this year’s half the minute registration opened — nearly a year in advance. I’m not even kidding.

The See Jane Run half marathon/ 5k is a women-only event (though men can and do run it, as well), with a beautiful flat course. 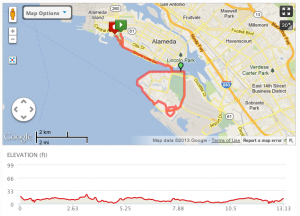 I ran 2:10 last year, with very little training. (This is when I decided to get my stuff together and started the Own It: Half Marathon training plan from Train Like a Mother

I’ll never forget the camaraderie and fun spirit of this race! I had run out of gas with about a mile to go and was walking, when a woman passed me and said “Come on, are we going to do this in under 2:10 or what?” She gave me the strength to start running again — thank you!

The fun continued well after the 13.1 miles, with champagne for all finishers (and a beautiful champagne flute to keep, in the photo above), Ghirardelli chocolate and many other treats at the post-race expo. Oh, and a free photo booth with fun props to use (you can’t tell in the picture below, but I’m wearing a tiara, like the fabulous princess that I am): 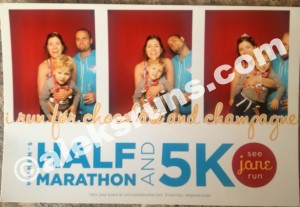 BabyRuns “ran” the kid’s race: I say “ran” because the course was a mile long and he made me carry him on my back for at least half a mile… but proudly ran through the Finish line on his own, amid loud cheering and applause.

If you haven’t signed up yet, head over to their registration page and do it now!

Anyone willing to pace me?

2 thoughts on “Do You Run for Chocolate and Champagne?”