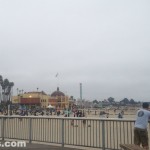 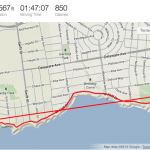 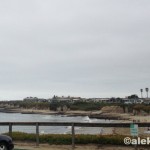 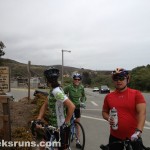 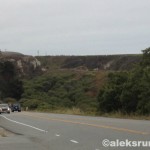 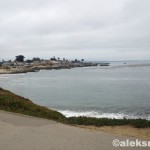 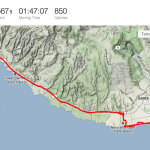 You may be wondering if it’s even legal to ride a bike on Highway 1. Yes, it is. Is it safe? Uh… questionably. Scary? Hollymap-yes!

Let’s backtrack a little, though. Today I did what is quickly turning into habit: a pretty solid swim-bike sesh the day before a race. (Giant Race half marathon, hello?)

Oh, but hey: my group was doing a swim-bike-run, and I decided to skip the run and save the legs for tomorrow. So don’t say I’m “crazy” or anything.

The plan: Since a lot of us have registered for the Santa Cruz Triathlon in September, we were to swim, bike and run the course. Partial for the swim and run, but all of the bike.

We got to Cowell’s beach at what I thought was an insanely early hour – 9 a.m. – and look at all the people who were already there:

Turns out that there was a beach volleyball tournament happening and an open water swim event that started at 10 or 10:30 (we were already getting out at that point). So much for my idyllic picture of us and the seals, lonesome creatures in the early, overcast morrow. There were seals, by the way, swimming by as we practiced.

Here we are, going over some basics before diving in: 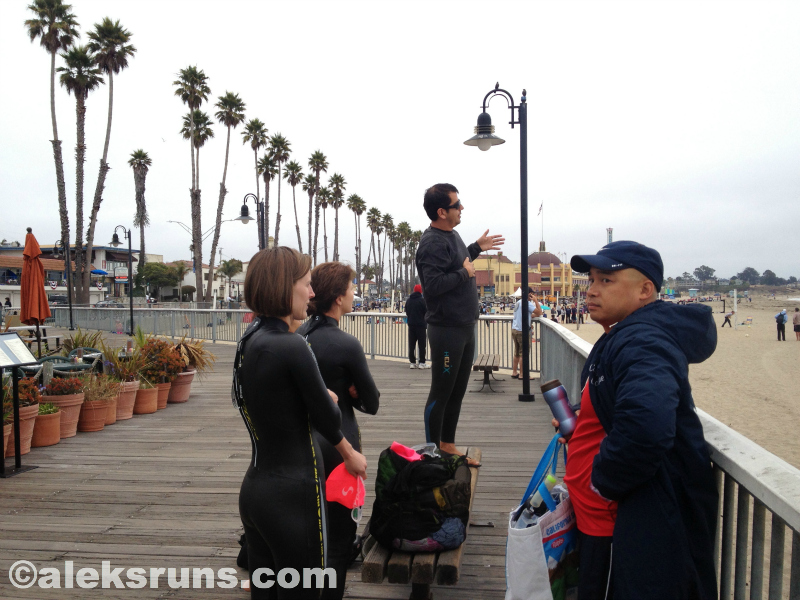 We got into the water to “warm up” – though “chill out” may have been more appropriate, man it was cold.

for the very first time! I had only swam in a wetsuit once before, a rental, and hated it. This one felt awkward at first, a bit tight in the shoulders, sort of twisty… but once I got in: bliss.

Salty water + wetsuit = you cannot sink. Seriously. Just stretch your legs and lie on your back, it’s like you’re on a floatie. Or on your stomach. In fact, do a few flips from back to stomach and back: you feel like a buoy! I am now a firm wetsuit believer. Best invention – and investment – ever!

We practiced running into the water a few times and diving in. The Santa Cruz Triathlon is a beach start, which means you start on the sand, sprint to the water and jump in. So different from the deep-water starts I’ve had so far! It’s one thing to chillax for a few minutes before your wave starts, another to go rushing in, heart pumping adrenaline through your body like you’re bungee jumping.

To everyone doing a triathlon with a beach swim start: practice. After a few takes, you sort of get used to it and it’s no big deal.

We did a few short out-and-backs, one longer one, and time flew. Well past 10, we got out of the water and headed to our cars.

We took our sweet time in “transition” – no rush. Turns out, the Santa Cruz Triathlon involves running pretty much a half mile from the beach to T1. What? This time, we just went to our cars to get the bikes and dry out. Everyone from the group put on dry shirts but me. Oops. I regretted that in the first few miles of the ride.

The bike was… scary. I’m so glad I did this ride pre-race and may even be talked into doing it once again before Sept 29, just to get used to the feeling of riding on a super-busy highway with cars zooming by and narrow shoulders. Brrrr.

The first two miles are stunningly beautiful: beach on one side, stately beach homes on the other. But the road twists like a snake left and right, to the point of dizzying. 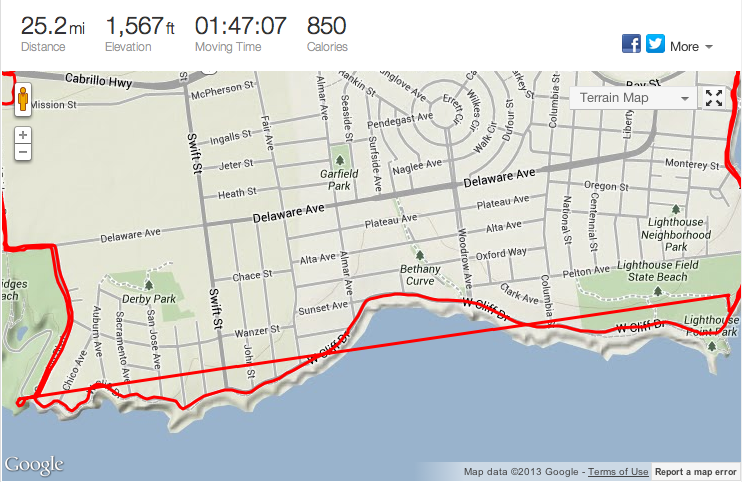 There is no way I could ride that section faster than 10-13 mph, especially with the ongoing traffic. [Ignore the straight line, this is where I had paused my RunKeeper app and forgot to restart it for a while.]

We made a quick stop at a park restroom, then rode over to the turn-around of the run course (or thereabouts): 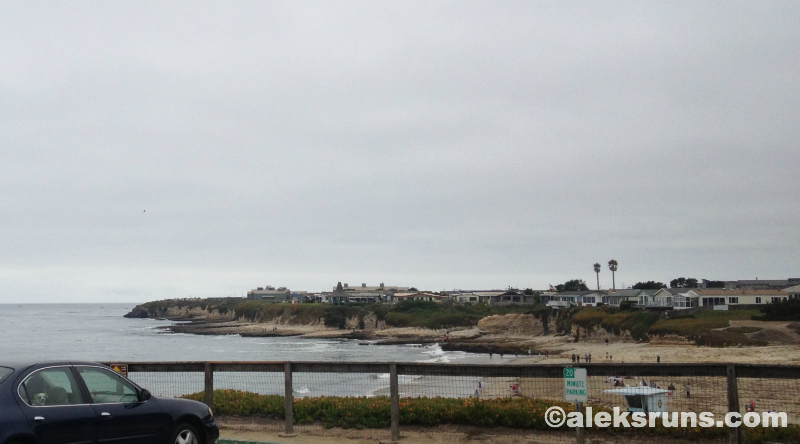 Then onto Highway 1 for the bike ride to Davenport.

I can’t tell you how many times I ride my bike and wish I could take photos. This was definitely one of those times. The ride is stunning. Scenic. Stupefying. Also: scary as s%^&. I mean it. To ride on a super-narrow shoulder that slants, to boot… it’ll definitely take some practice for this not to feel like a near death experience.

The road is straight and fairly flat for the first few miles, so other than freezing my butt off and wishing I wore a very bright jacket with all those speeding cars too close for comfort, I just pedaled on. And then: BAM. A hill. And I mean it was an H-I-L-L. I’ve done some good climbs in my short cycling career, but not like this: a straight-up climb; short and definitely anything but sweet; no turns to fool you into thinking it’s not really that bad.

But guess what. It wasn’t that bad! There were several of those, but before each climb was a descent that you can use for some free speed. I got through most of the climbs with hardly any pedaling, just shifting to a few easier gears. Whew.

Our turnaround point was a restaurant in Davenport with the world’s most tempting ambiance and outdoor signage: 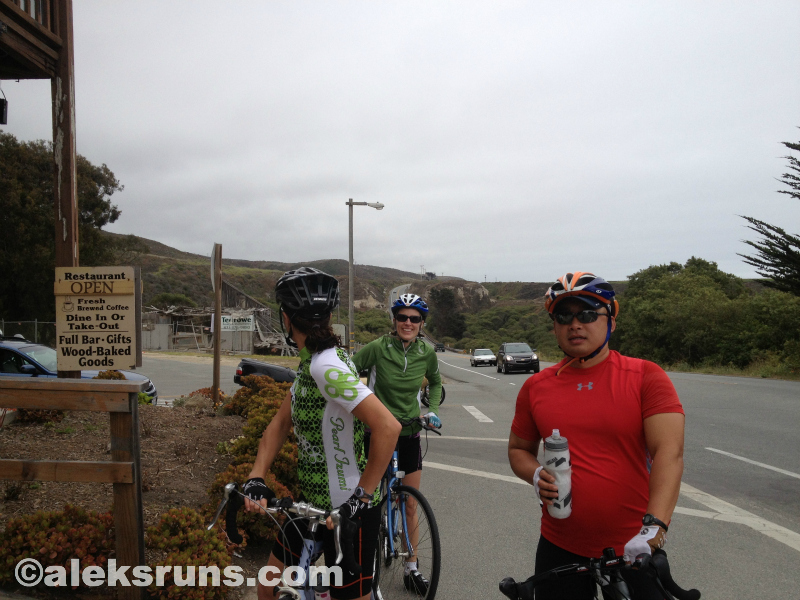 I have never wanted “fresh brewed coffee” more in my life, but it would have to wait.

One of the little hills on the way back: 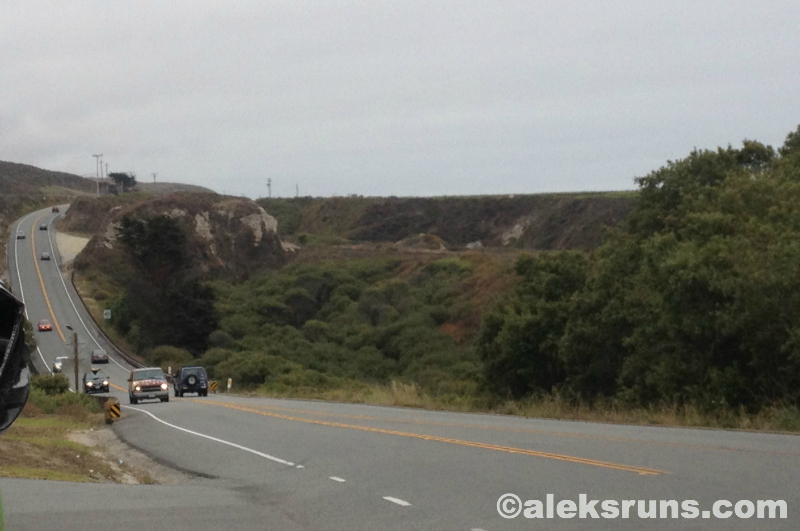 And back in Santa Cruz: 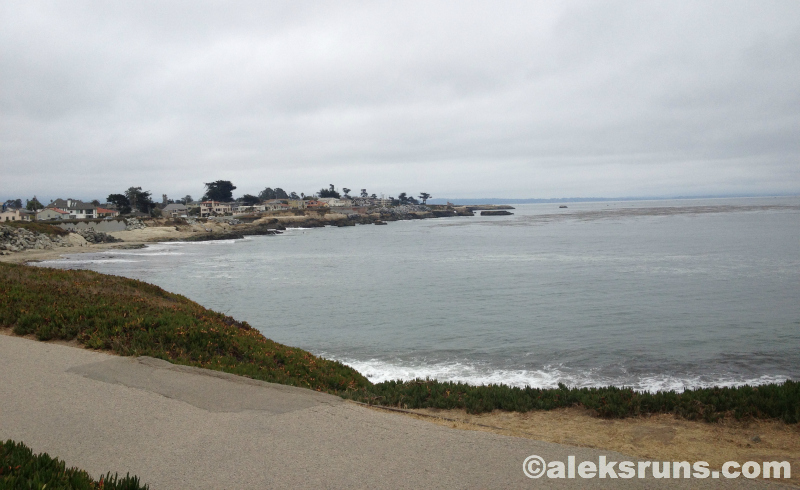 Our whole ride took nearly two hours, but that involved lots of stopping, waiting, turning back and going around. Hopefully, by race day I’ll be able to do better. 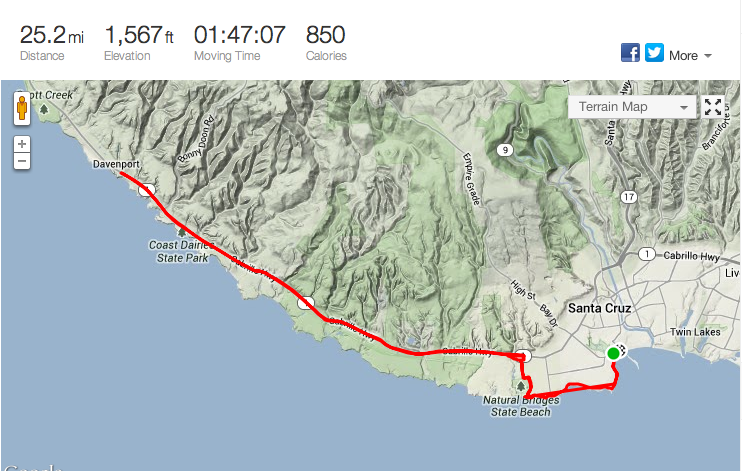 And when all that was done, I carbo-loaded like a boss. And there you have it, yet another pre-half-marathon taper.

Who’s excited for the Giant Race tomorrow? Anyone racing elsewhere?