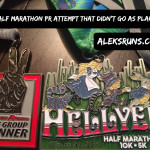 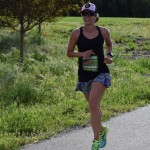 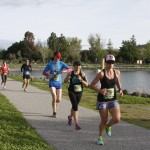 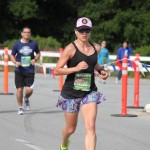 One of my marathon-training traditions is racing a half marathon four to six weeks out to see how things are coming along. I look for a low-key local race that doesn’t involve much hoopla, like driving longer than an hour to get there, staying at a hotel overnight, or having to wake up at 4 a.m. to make it to the start on time. (If no half marathons meet this criteria, a 10K would do, too. Last year, I used a 10K as my tune-up race for the Santa Rosa Marathon.)

In my Boston Marathon training cycle, I picked a local half marathon put up by Brazen Racing. The Hellyer Half Marathon fit the bill perfectly: a small race less than 20 minutes from where I live, with an 8:30 a.m. start, a fun atmosphere and what I thought was a thoroughly flat course. (The key words being “what I thought” — more about this in a bit.)

Brazen races are always a fun experience, by the way, and I highly recommend them. The food spread at the finish is amazing. If you’re a San Francisco Bay Area runner and haven’t tried them yet, go check them out.

My main goal for this half was to run it as fast as I can. Obviously, I wanted to PR. (That meant running faster than 1:42:12, my PR from the Livermore Half in 2015.) What is more, I was really hoping to get under 1:40. My Boston Marathon training has been going well and, with running nearly 60 miles a week, I thought it was realistic.

I ran the Hellyer Half in 2012 with little, if any training at all. The race was on March 3, and my running log shows I did a total of seven runs in all of February. My time was something like 2:10 — and back then I was an around-2-hour half marathoner, so you can tell I wasn’t prepared.

But I remembered the course well: a flat out-and-back, the first half going up ever so slightly — then coming down after the turnaround. And when I say “slightly” I really mean a tiny little bit: something like 60 feet total over 6.5 miles. Practically flat.

So my pacing strategy for this year’s showing was to go fast right from the start, push the pace for the first half, and then cruise after the turnaround. At best, I would be able to take advantage of the slight incline and push the pace even more — at worst, I’d try to hang on to an aggressive pace for as long as I could.

Race morning was freezing. I arrived about 40 minutes before the start, picked up my bib and ran back to the car to keep warm. I sat there until something like 15 minutes to start, when I finally braved the cold to meet up with a couple of friends and get in a short warm-up. Managed a half mile at a brisk pace (8:30 or so), and that was it. Headed to the start, lined up very near the front and as soon as the gun sounded about three minutes later, I took off at a fast pace.

The start was different this year and the race director said something about a new course — but yet again, I thought the change was minimal and surely, we would head out to my familiar straight-line flat and fast course in no time.

I ran mile 1 in 7:27 and mile 2 in 7:34. The pace felt faster than I would normally start off a half marathon with, but I felt OK. I was even able to sing along with the songs in my earbuds (sorry, everyone…), which means I wasn’t out of breath.

Then things got harder than I thought they should. All these little bumps were showing up under my feet. I wouldn’t call them “hills” really, but very short, yet constant, up-and-downs. I think we were running along a golf course, so imagine the little hills those places usually have.

I picked up the pace again for miles 4 and 5 (7:26, 7:32), but by now it had become clear to me that this course was absolutely different from what it used to be. I had no idea where it would take me, whether I’d need to adjust pace for hills, when we would turn around — I knew nothing.

I like to start a race prepared (that’s soft-speak for “I study the elevation charts obsessively”, by the way), so not knowing what’s coming messed with my head in a big way.

By mile 6 (7:36) I knew that I couldn’t sustain my ridiculous 7:30 pace for the rest of the race. We had just done a turn-around and I got reacquainted with the nasty little bumps along the golf course again. Mile 7 was 7:41. 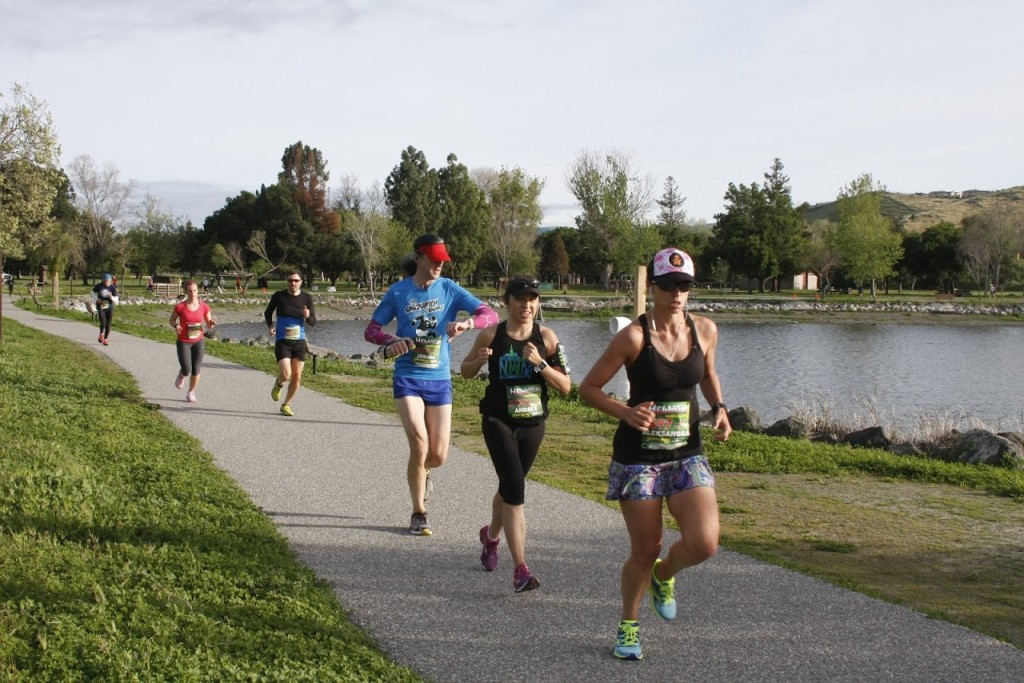 Somewhere between miles 7 and 8, I think, we ran by the 10K turnaround and the course got more crowded — but nothing unmanageable. I actually prefer to have more runners on the course, so I can mentally latch onto people and try to pass them. Among the half marathoners alone, the field had spread out quite a bit and other than leapfrogging with a couple of guys and gals, I didn’t have much company.

But I still had my toughest miles ahead. Mile 8 was the worst. I remember running as hard as I could, then looking at my watch and seeing an 8:XX pace and not knowing what the fudge was going on. Why couldn’t I pick it up? I was so ready for this stupid race to end. I knew I had paced it wrong, and I knew it was all my fault, and I was simply mad at myself.

I passed a kid that couldn’t have been more than 10, and he picked up the pace trying to stay with me. I asked him if he’s doing the 5K or the 10K, and he said the 10K. Duly impressed, I said something like “Yeah, kid, good job! High five!” – and we tried to high five but our hands didn’t meet. Luckily, it’s a running race and not synchronized swimming, and nobody saw – so we carried on, each at our own pace.

With about 1.5 miles to go, we did one last turnaround to head towards the finish. I saw my coach for the second time (I honestly don’t remember at what point in the race I saw him first, I think mile 7 or 8). He was saying something and I could hear words, but not process them.

Mile 12 was 7:50. I didn’t think if I’d be able to finish in under 1:40 at that point, but I saw a woman running maybe 100 feet in front of me and with one last surge I passed her just before we made the very last right turn into the final stretch. I saw 1:39:xx on the clock and sprinted… 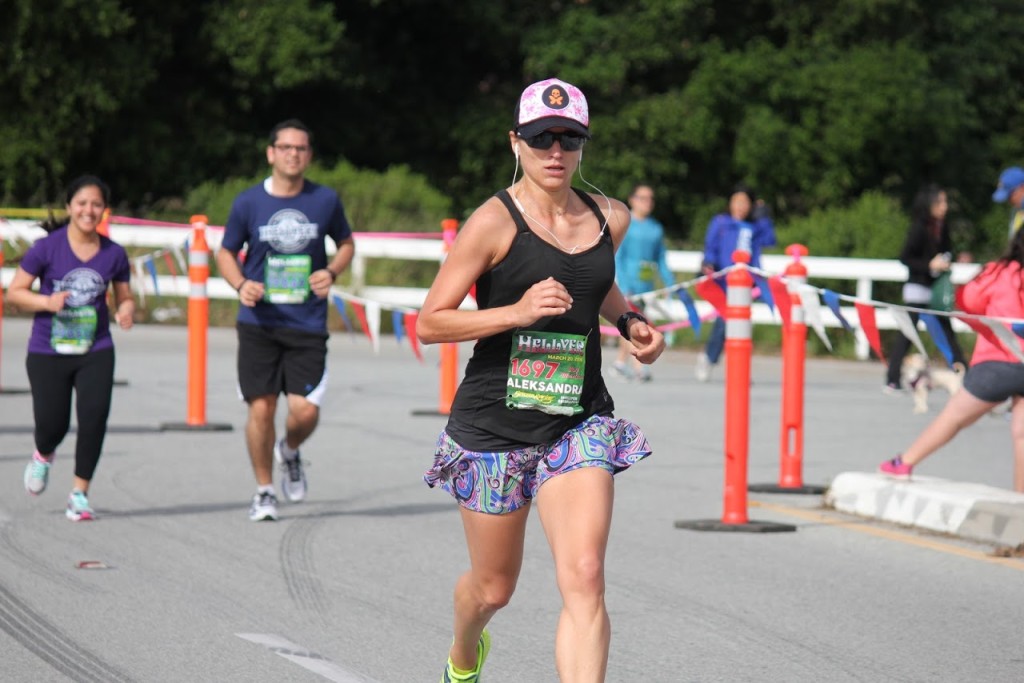 To an official time of 1:40:09. Well. It’s a 2-minute PR and I’m very far from complaining about it. I also ended up placing 6th female (the initial results had me as 5th) and 2nd in my age group. I’m happy with that! But I’m disappointed at myself for not checking out the course maps in advance and, as a result, pacing myself badly. Honestly, if I had run the exact same time, but with negative splits, I would have been thrilled.

I celebrated with a few friends at the finish (FYI, if you aren’t familiar with Brazen Races, they do have It’s It ice cream for finishers!) and chatted with my coach a bit to share what a terrible pacing job I’d done. As any good coach, he found a way to spin it into a 100% positive light: I did learn valuable mental coping skills, hanging on to a good pace in a tougher situation than expected.

Then, I had to skedaddle in a hurry to take KidRuns to the first of several weekend activities we had lined up for the day. Life of a running mom… I am so grateful for venti Starbucks caramel macchiatos with their 3,750 grams of sugar and 52,000 calories.

For my next half marathon PR (and sub-1:40) attempt, I think I’ll sign up for the San Jose Rock’n’Roll Half, which I have run three times and know for a fact is flat as a pancake. I will study the elevation charts, regardless. 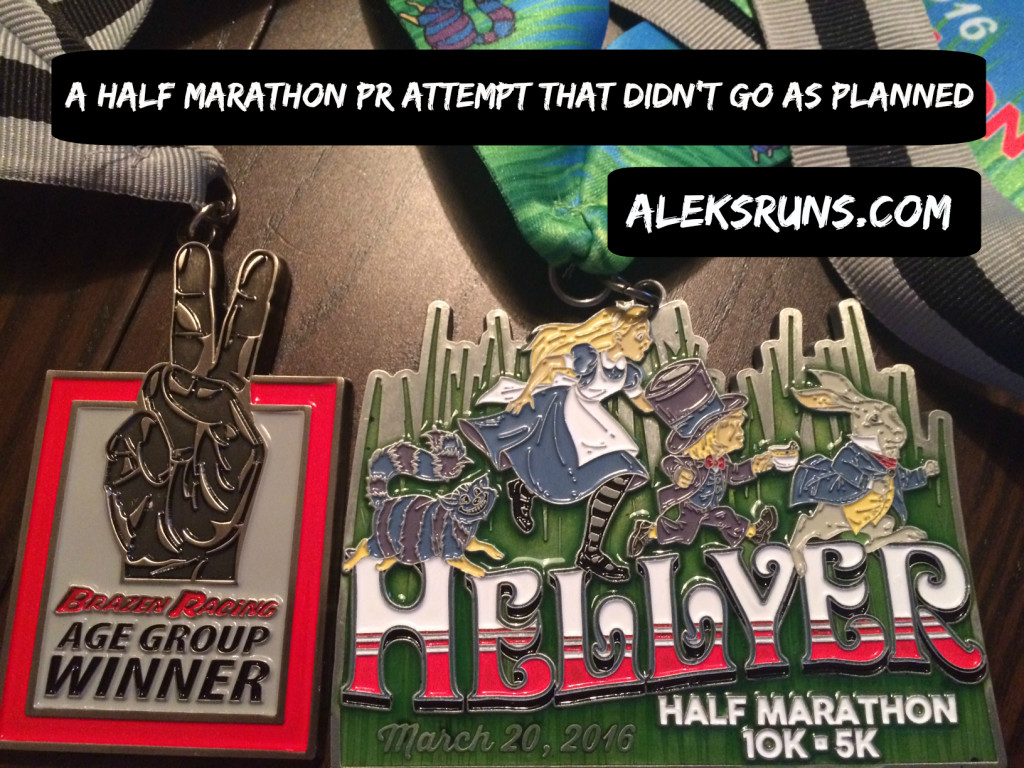 2 thoughts on “At the Hellyer Half Marathon, PR was for Pretty Rough, too”