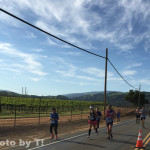 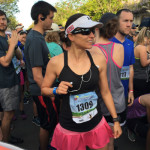 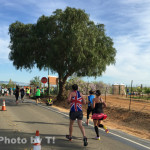 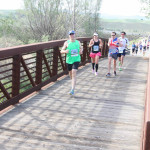 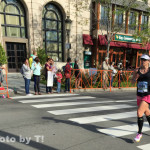 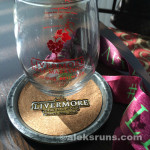 Run. Wine. Liv. is the motto of the Livermore Half Marathon. With a course rolling through beautiful wine country and with a big wine tasting festival at the finish, I’d say that’s a good way to describe the experience!

I ran Liv this weekend with two goals:

1. Kick off my epic birthday weekend of run-fun (to be followed up on Sunday with the Rock ‘n’ Roll San Francisco half);

2. Run as fast as I can and find out whether (and by how much) my speed has improved since my last half (the SF Giant Race in September ’14).

I’ll give you the spoiler now because there’s no way I can hold it until the end of this recap — and I already told all my friends, family, coworkers and random strangers, and posted about it on Facebook, Instagram, and possibly even LinkedIn:

Here’s how it went down:

Sushi for dinner, obviously. But more important was picking out a race outfit that is both light, comfortable, non-chafing and pretty. It was my birthday weekend of run-fun, after all!

After much deliberation over which skirt to go with from my continually-growing Skirt Sports collection, I settled on the Lioness in Flirt, my black Kelly Support tank (bonus: it has a built-in bra, so less stuff to wear), and black compression socks. Do I look like a Runner Girl About to Have a Run-Fun Birthday Weekend? Yes, I do. 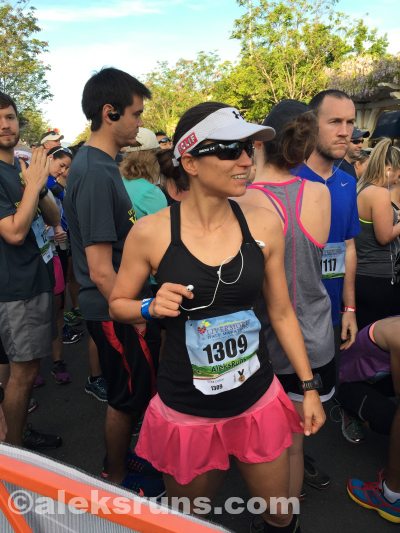 [Many thanks to my friend T. for all photos from this race – they are better than the official ones, and I’m not just saying that.]

The best thing about RunLiv is that it’s a fairly small race – 2,800-ish finishers this year – so the logistics of getting there and parking are easy. Better yet, it’s a looped course. We arrived about an hour before the race start Saturday and parked a two-minute walk from the start/ finish line with no traffic issues whatsoever. A cute little coffee shop – Panama Coffee House – was open and the runners were living it up with some high-quality java and a posh clean bathroom. And for those not wanting to wait in line for the facilities, there were plenty of porta-potties right outside.

The only downside: race-day packet pickup was only available for an extra $30 or so, and obviously, not everyone has time to casually drive to Livermore on a Friday evening. Lucky for me, a friend offered to pick up my bib – thank you, J.! I’ll get the next one! 🙂

After an easy 10-minute warmup (per coach’s orders), I lined up at the start, right next to the 1:45 pace group. I asked the guys what their strategy was: run steady? negative split? They said they were shooting for steady, to which I noted, Oh Cool, I will try to keep up, but you guys will probably be too fast for me. Don’t wait up!

So we started. The first couple hundred yards were a bit congested, so our pace was quite a bit slower than the 8:00 min/mile needed for a 1:45. We made up time after the crowd spread out and during the second mile, which was relatively flat. I ran right behind the pace group, thinking, This feels nice! I wish the whole race was like that!

About three miles in, we started hitting a batch of rolling hills and I decided it was time to carry on the plan: push it going up, push it even more going down. “This is too easy,” I turned to my friend D, who was also running. “Let’s go.”

So we went. Our pace crept down to the 7’s, where it stayed… well, basically the entire time, except for a couple of miles that were particularly hilly:

Per Coach’s orders, I still held back somewhat, until we hit miles 6 and 7. Then I upped the effort, even though the pace slowed down a bit, because now we were climbing. At Mile 8, we saw Tiffany, who took some awesome photos of us running. It was only later, looking at them, that I realized how beautiful this course is! Just look at it: 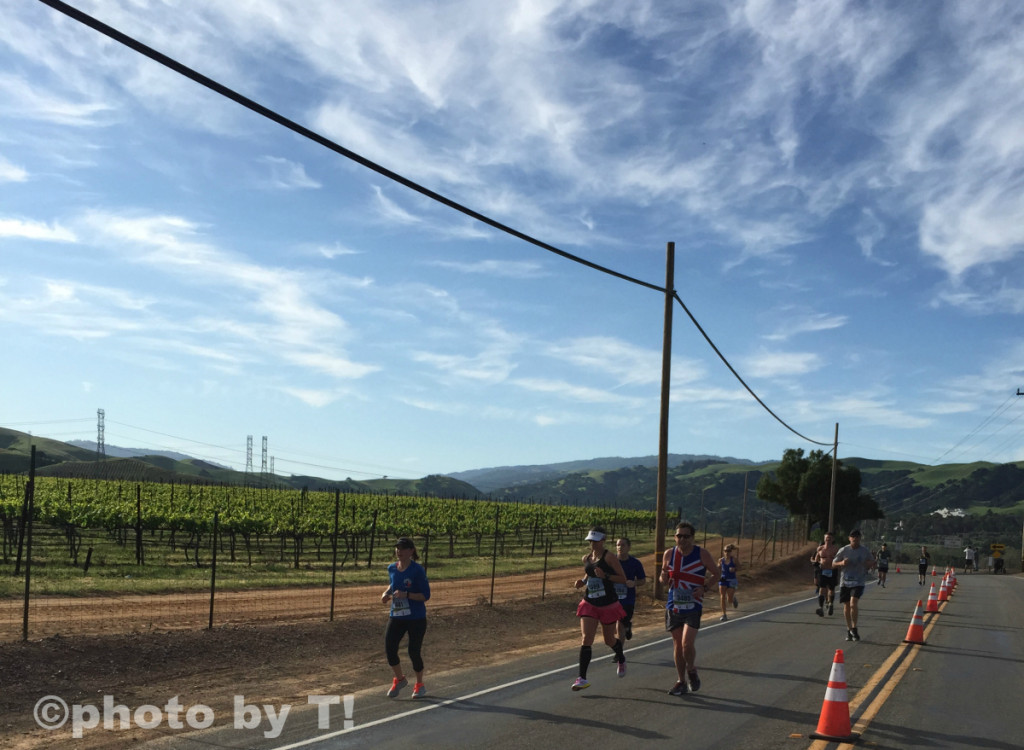 We looked pretty dashing ourselves:

Right after that right turn you can somewhat see in the photo is the start of the biggest climb of the entire race. This thing felt like it was a mile long. Maybe it was? Strava says we only climbed 83 feet between Miles 8 and 9, which I absolutely refuse to believe is true.

Or, maybe I was getting tired. I did not like that hill.

The other thing I did not like? The countless wooden bridges. Small, but shaky as runner feet pounded on them. I don’t know how many of them we ran over, but there must’ve been at least a dozen. Up-over-down. Repeat. Here’s one of them, from a race photographer (shoutout here to RunLiv for providing all digital downloads free of charge. Yeah!): 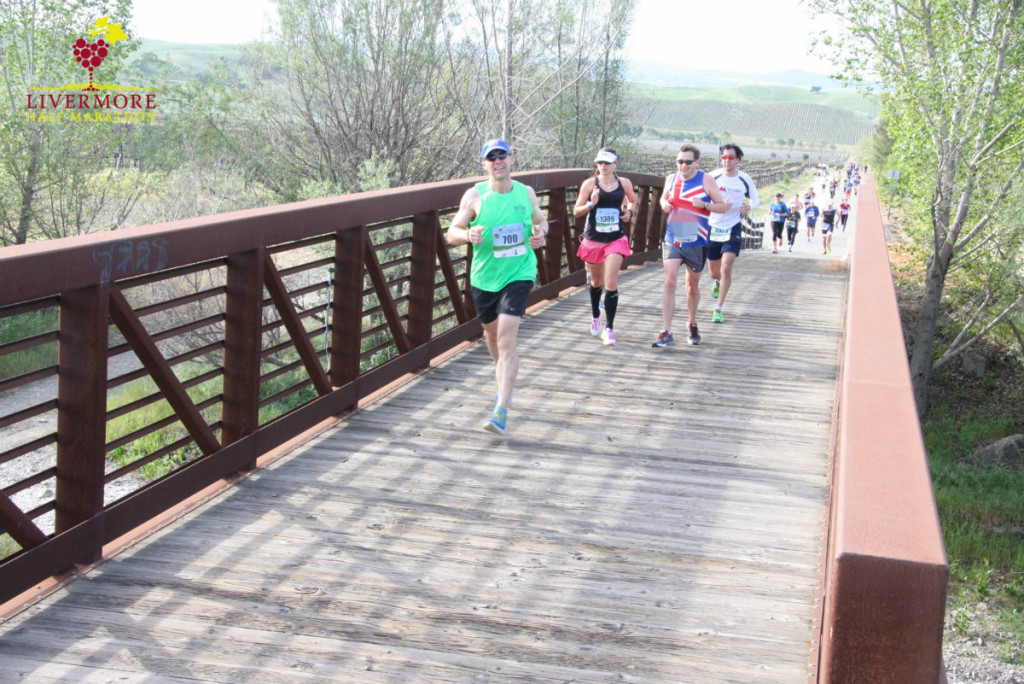 The last three miles were so hard.

I feel like Strava needs to add a second dimension for distance, just like they have one for pace (the first column is actual pace and the second is and GAP, or grade adjusted pace, which factors in hills and gives you the equivalent pace for running on flat). The EAD, or effort adjusted distance, would factor in your heart rate and shrink or expand each individual mile based on how hard you’re working for it. My last three miles felt at least two miles long each.

So when I finally turned the corner to the finish line — and realized I was going to run 1:42-something, after all! — I mustered what little brain power I had left and sprinted to the finish. 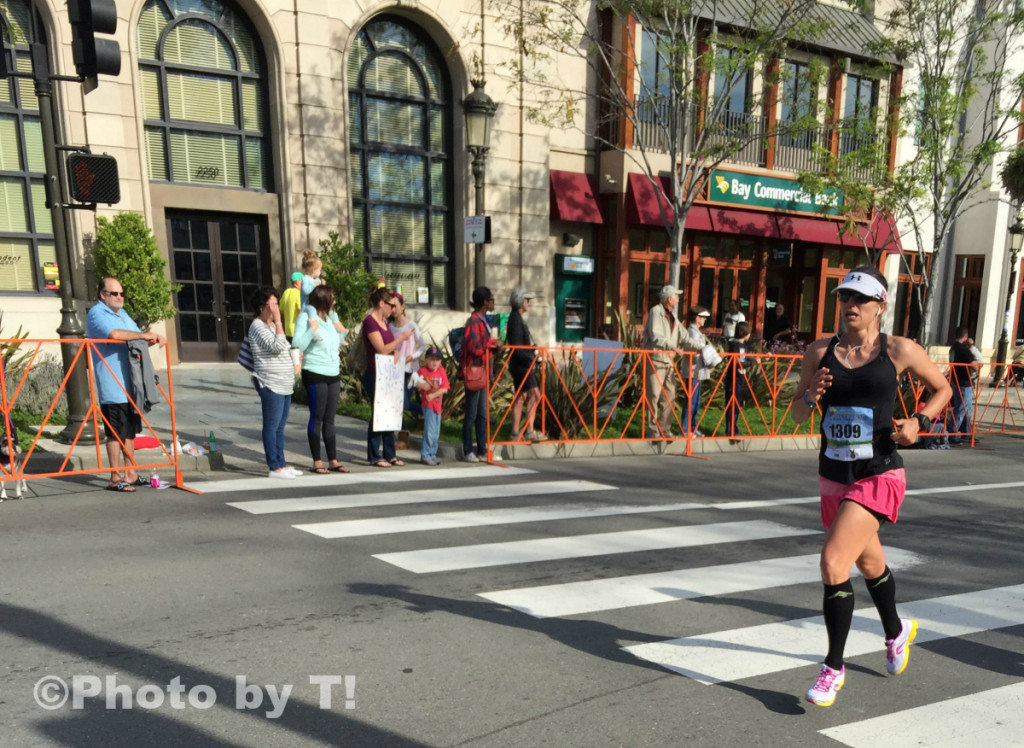 But a cold beer awaited right by the Finish line – and that was the best!

The swag was pretty good, too: 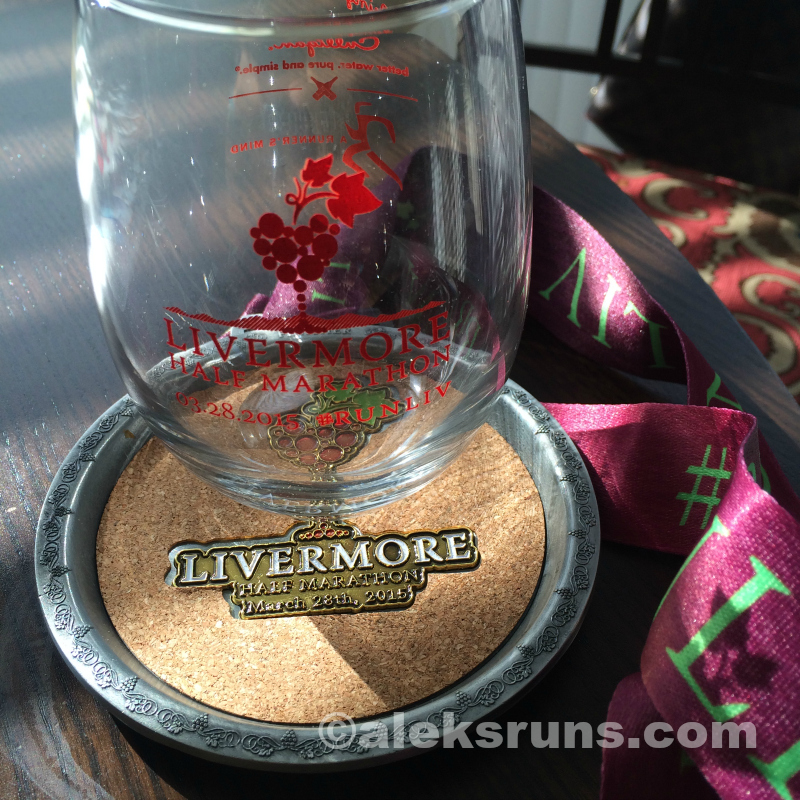 8 thoughts on “Run, PR, Liv at the Livermore Half Marathon”