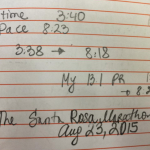 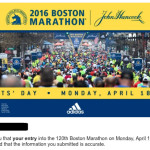 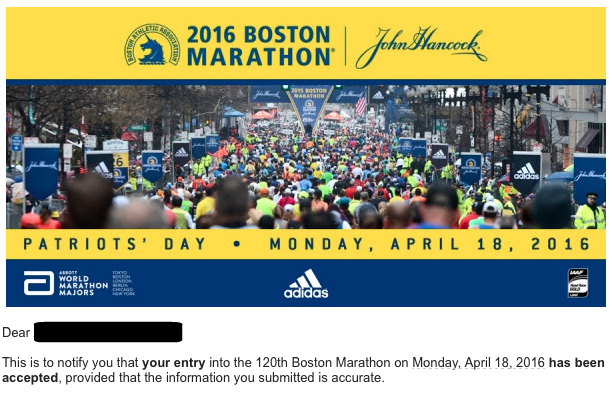 I started this blog post many times and dropped it, asking myself, “But why would anyone care?” I squeaked into the 2016 Boston Marathon. I barely made it, only eight seconds within this year’s cutoff time. One potty stop or lingering a few seconds too long at a water station or two, and I would have been out of a dream. How would my training, then, be of help to anyone?

I don’t have an answer to that, other than, I just wanted to sum up my experience – if not for others, then for myself. A forever reminder that what I once thought impossible, was not.

For those who don’t have time to read the whole thing:

The Boston Marathon has always been on my marathon bucket list. But with a marathon PR of 4:22 and half-marathon times at just below the two-hour mark, I just thought of it as a distant dream. I could never qualify.

I’m an average runner: not fast; definitely not Boston-fast.

Last year, my triathlon group got a new coach and, with his training — swimming, track workouts and biking hill repeats, as well as the weekly plans he developed for my many races — I slowly began cutting time off my PRs. In June, my half-marathon best went from 1:55 to 1:49:35. While building up mileage for a half ironman in October, I ran a half in August and took another 16 seconds off. Tiny as this improvement was, it planted a thought: my average pace, an 8:20 min/ mile, was roughly what I would need to run a Boston-qualifying marathon. Could I?

I took the question to Coach and he said that would be an awesome project for 2015. So once I wrapped up my 2014 racing season, I took some time off of structured training, registered for the 2015 Santa Rosa Marathon in August, and built my entire race calendar around it.

Building a base; confidence; belief

I raced very little in the months that followed, but trained hard. I completed my fourth half Ironman at the end of May, with what I thought was a solid time given the course and conditions, and a week later, had a great run at Escape from Alcatraz. Then I racked my bike and marathon training officially began.

One of the things my coach told me before we started this marathon cycle was that I would run every day. I am used to training seven days a week, so that didn’t scare me. With triathlon, though, we have swimming or easy-ride days that act as active recovery days, at least from the pavement-pounding of run training.

I ended up taking three days off running for the 10 weeks of this marathon cycle: one after a 10K race on week 2 (I rode my bike to work that day; a great way to loosen up the legs), and two rest days during which I was either traveling internationally (15 hours on a plane), or in a car for a day-long road trip.

Recovery runs
The key to surviving a 7-days-a-week running plan: easy run days must be just that, easy. Feel good? Hold back. Don’t be tempted to go faster just because you think you can. Ironically (or logically?), my easy runs slowed down quite a bit as the weeks progressed and I began to feel the miles – and fatigue – pile up. In the beginning, I was knocking off easy runs at 8:40-ish pace; towards the end I was running 10-minute miles on heavy legs.

My program was built around three to four quality runs every week. There was a lot of speed work and running at tempo pace, since speed is where I needed to make progress the most.

Progression runs: start at an easy pace (1 min slower than marathon); gradually pick up to marathon pace or tempo pace. A 45-min progression run would be 15-15-15; a one-hour progression run might be 30-10-10-10, etc. Often, I would have a progression run scheduled on a day between an easy/ recovery run and a hard quality run.

Intervals: short intervals (200s or 400s) helped me work on speed; longer intervals (1-mile repeats or a ladder) added an endurance factor to the mix.

I admit, I was nervous about not running “long” all that much. A few years ago, I followed a marathon training plan that had three 20-mile runs, in addition to all other weekend long runs of 15 to 18 miles. That got me injured, though, so this time whenever I’d ask Coach when he would finally have me run 18 or 20 and he’d invariably say, “You will, don’t worry about it.” — well, I didn’t.

The Santa Rosa Marathon is flat, but I ran on a hilly terrain at least once a week or so. (Hills make you stronger and faster, blah blah – most importantly, trails are gentler to your feet and joints, and when the weekly mileage creeps upwards of 50, that matters a great deal.)

One of my long runs (16 miles) was on trails, with about 2,400 feet elevation gain, and one 18-miler was a somewhat hilly road run, with roughly 1,400 feet elevation gain. The rest of my long runs were structured to the T. After a short warmup (usually two miles), a run would have three intervals of three to five miles at or slightly faster than race pace, with one mile recovery. My last long run, 20 miles, descended each race-pace interval from slightly above, to slightly below, training me to pick up the effort as the run progressed and, basically, get used to suffering.

Despite not doing very many long runs, every week I had what I called a medium-long run of seven to 12 miles. The shorter of those, usually seven to nine miles, were often tempo runs or longer interval workouts, and the longer ones (10 to 12 miles) were easy-pace recovery runs. This added mileage and quality to my weekly schedule without having me spend too much time on my feet on a single run.

Boy, when I write it all out like that, it seems like a lot of work… It was worth every drop of sweat!

[tweetthis]”Joy lies in the fight, in the attempt, in the suffering involved, not in the victory itself.” -Mahatma Gandhi[/tweetthis]

14 thoughts on “How I (Barely) Qualified for the Boston Marathon: Training Plan Overview”