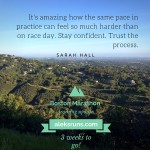 With less than three weeks to go, we are now counting down to the Boston Marathon in earnest. (Although, who are we kidding, my countdown began last year, when I learned that my qualifying time actually got me into the race with 8 seconds to spare).

The latest runner update I received from the Boston Athletic Association included this little bit:

It is nearly time to taper your training and begin carb-loading for the big day. We wish you the best of luck in your last three weeks of training, and look forward to seeing you in Boston!

And an email from the folks conducting a research study on running mechanics in which I’m participating (and yes, I am ridiculously excited that I get to contribute to dorky stuff like “how do foot strike mechanics change, if at all, during a 26.2-mile road race?”) began thus:

Thank you for your continued interest and participation in the Marathon Running Mechanics Study! At this point in time, we expect you will have completed your longest run of training and are tapering towards race day.

But, you see, I have not. During my last marathon training cycle, the one and only 20-miler I ran was 10 days before race day.

Many runners believe that this is cutting it too close, and anything shorter than two weeks of tapering is not enough time for the body to recover before the race. I believe that, for me, a shorter taper works better. I first tried it two years ago on my coach’s directions, and was surprised how much better I felt, physically and mentally, than when I was tapering for two weeks, or even three.

In short: this is not a “taper madness has begun” training update. This is a “train your own training plan” update. A bunch of Boston marathon runners whose training I’m following have done two or even three 20-milers already, and have now begun to scale back. But that’s their training plan, not mine. 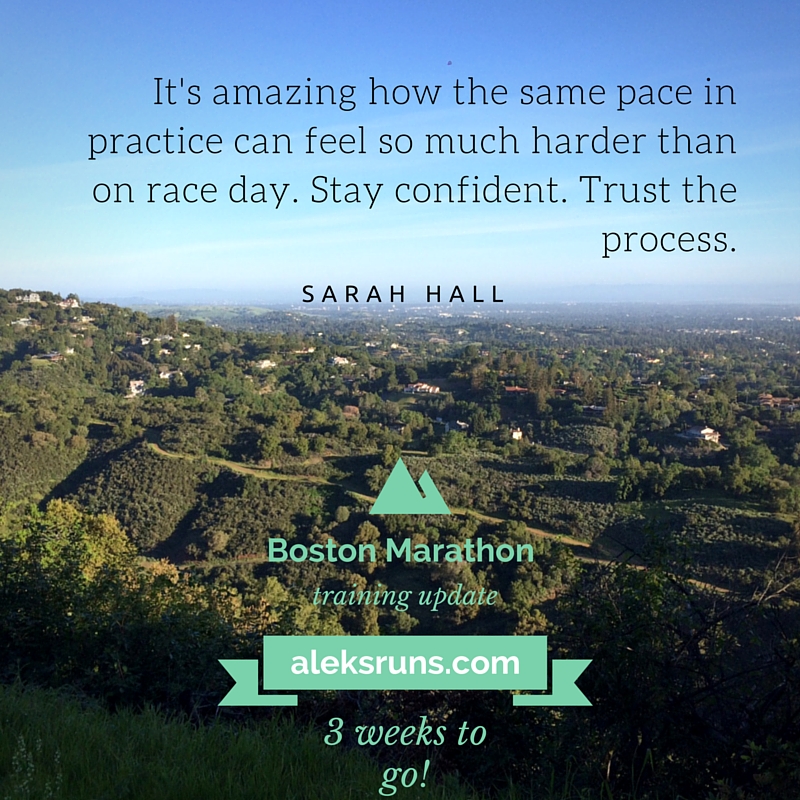 My training plan for the past week was focused on recovery from the Hellyer Half marathon – with the understanding that the week after, the miles and intensity would shoot back up. I have yet to run longer than 18 miles in this training cycle, and my long run last week (with three weeks to go until the Boston Marathon) was 16.2. Here are the details:

Monday: Short recovery run after the half marathon the day before. 3.2 miles in 31 minutes (9:36/mi average pace). Surprisingly, no soreness; just a bit of heaviness in the legs.

Thursday: A fairly short (1 hour) trail run with a friend. Easy pace, but lots of climbing: 1,300 feet in 5.6 miles. Wore my Team Betty 2016 tights. The colors and patterns on those things are just so rad! Check out some Betty Designs stuff here.

Friday: [This is important] Got a deep-tissue massage on my left leg in the morning. I have had some niggles on my left side for a couple of years now. Any time I pick up the pace (a lot – as I do in races), my left leg feels the fatigue sooner and, worst case, get cramped up if I’m going faster, longer. This didn’t happen during the half marathon, and I should have probably left it alone until after the Boston Marathon. But I didn’t. I got 50 minutes worth of work on it (massage, ART, and cupping therapy, which left huge purple circular bruises all over my butt and my upper leg – sorry, TMI?). The massage therapist said my Gluteus Medius, TFL and Vastus Lateralis are all cramped, tight and knotted, and he really, really went at them. Any time I go a chiropractor or to get a massage, by the way, and I’m told my “Gluteus medius” is tight, I smile with glee at the idea of literally having a tight butt. Thanks, doc!

Anyway, the short-term result was immediate soreness in my (tight) butt and upper leg. An easy 30-minute run later that afternoon felt sluggish and slow. But, I’m hoping long term the payoff will be worth it, namely: limber legs and cramp-free running!

Saturday: More post-massage soreness! Luckily, I didn’t have to push the pace: an easy trail run, 8.2 miles in 1:20 hrs and just around 800 feet total climb. Running down was tricky, as my left quad was still sore from the massage (the Vastus Lateralis is the biggest of the four muscles making up the quadriceps, and the one bearing the brunt of hard work and body weight when running downhill.)

Sunday: Long run day! This one was an easy-pace 2:20 hrs. Coach said to up the effort a little for the second half if I’m feeling good, but frankly, I was feeling like keeping it easy all the way. Got in 16.2 miles and an average 8:46/mi pace. A few miles in there in the 8:20s, but I was not capable of anything faster.

Oh, and I got my Runner’s Passport last week, which has my bib pick-up slip with my number. I’ll be running down to Boylston Street as Runner 20325!