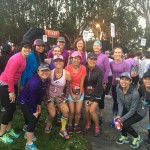 If I had to guess one item on the bucket list of most San Francisco Bay Area runners — or runners anywhere, really? — I’d go with running on the Golden Gate Bridge.

I’d chance, even, that it’s an item you never really get to cross off the bucket list. You do it once, then again, and again – and it never gets old.

The price you pay for racing on this beauty, however, is steep. Literally. Getting up to the bridge – and down, and back up again – involves hills. Not massive trail-like hills, but hills nonetheless.

I knew full well about those hills when I signed up for the 10-mile distance at the Mermaid Run San Francisco. The memories are fresh, even if it had been more a year and a half since I last ran a race over the bridge (the San Francisco Rock’n’Roll half marathon). But while the course doesn’t easily lend itself to a PR, the last time I ran that particular race was back in 2013, so I had a PR in mind anyway.

Truth be told, I was hoping to run somewhere around 1:15, a 7:30 min/ mile average pace. (One day, I really hope I can do this course in 1:10 — a 7 min/ mile average pace — but with this year’s race schedule, I knew that couldn’t happen… In fact, for me to be able to run 1:10 on this course, I think I’d need to make this race a key one for the season. Planning your race season: a topic for another, important!, conversation.)

I carpooled with a couple of friends and we got to the Marina Green early enough to score a convenient parking spot just a short walk away from the start. On the flip side, that is also when I realized I forgot my Honey Stinger gels… Not a terribly big deal, I should be able to survive 10 miles without extra carbs. (In hindsight, though: a huge deal for my mental game over the last two miles of the race.)

As usual, Moms Run This Town San Jose had a solid presence at the Mermaid Run and getting organized for a pre-race photo – or two! – was a party.

When we got the “five minutes to start” warning, I lined up near the front, put my music on and got ready to go.

The first two miles of the course are flat and I settled into a comfortable pace. Probably slower than I should have been running, but I didn’t want to blow up too early in the race. The lead group took off super fast and I could barely keep them in my sight within the first mile. Obviously, those ladies were running a pace I couldn’t match for the life of me, so I just ran my own race.

As it happened, I spent those first miles in the company of a small group of ladies and a dude. Why men run those women-only events, I don’t know. We actually talked about this before the start and one suggestion was that they come to run with and support a woman in their life. That’s quite nice, indeed — except this dude was running solo and feeling quite competitive, it seemed. He took off chasing the lead pack and I was left to run with a few ladies in silence.

It’s weird, racing in a tiny group and with no spectators. Quiet to the point of awkward. It doesn’t quite feel like a race, but you know you must push and try to run your best. One long, silent mind game.

Every race tests the mind, but in this one, my mind games began much earlier than I thought they would. Just as soon as we started climbing those hills (somewhere along mile 3), I felt tired and started wondering if it’s even worth to push the pace to the point where my lungs hurt. Why? Why make myself hurt when this is the last race of the season, I could run a comfortable 8 min/ mile pace and still get my course PR, and just enjoy the day?

Oh shut up. Because. Because we’re runners, and we do these things to ourselves.

Then came my first course surprise. I saw that we are running out on the left side of the bridge (against traffic), and not on the right as I remembered it from 2013. Not a bad thing, since we wouldn’t have to share the narrow pedestrian walkway with runners still making their way out over the bridge while we were running back, but still. I was kind of bummed because one thing I loved about this course was seeing everyone I know on my way back over the bridge: the smiles and high-fives are such good distraction from the pain!

As it was, I had no distraction but the wind, the beautiful views of Marin and… the flight of stairs we had to run down to get to the other side of the bridge! Course surprise number two!

Down under the bridge we went, over to the other side, and — a flight of stairs to climb! So painful! So annoying that I was forced to slow down to a walk! (No point in running up stairs, it isn’t much faster and I’ll get way too winded to settle back into my pre-stairs pace easily.)

Another lesson in “always double-check the course, even if you thought you know it.”

Running back over the bridge was lonelier and windier than ever and not even the beautiful San Francisco skyline could distract me from the pain in my lungs and my tired legs. I somehow made it over the bridge and – a brief reprieve! – settled into a few delicious downhills before hitting the last two miles of the course.

The last two miles are on a straight, flat dirt path, and are simply brutal. Every time I’ve run this section in a race, I’ve suffered so much! I had actually set a pretty ambitious goal for myself pre-race: to muster the strength and try and run a 7:30 or 7:20 min/mile pace for those miles. Well, I couldn’t. All I kept thinking about was my gels, and how I forgot them, and I needed some calories, even though I drank some Gatorade from a couple of aid stations (and some of it tried to make its way back up my throat ewww… another reminder to not do stuff I haven’t practiced in training!).

I don’t know if that was a mental bonk or a physical bonk — the first is more likely! — but I ran those last miles in 7:57 and 7:47, and I swear I felt that I could not have gone one second faster.

My Garmin clocked my total mileage at 9.75, too, so either the course was short, or the GPS was off — possibly because of the stairs at the far end of the bridge? Who knows.

I was so happy to be done with it at that time, that I could care less about the actual distance, or my time. As it turned out, I finished in 1:16:39. Almost two minutes off my 1:15 goal, but I knew I had given all I had that morning.

I made a beeline for the food, too, and the bagel and banana tasted like heaven!

Post-race breakfast! Ran my last race of the year at the #MermaidSF. 10 miles of hilly hills (ok, not so hilly, but there were STAIRS!) in 1:16:39, and a total slog over the last two miles – such bonk! So hard! Finished 12th female (out of 1,100+), 13th overall. Yes, there was one merman running this all-women race and he finished first! Now, off to enjoy a much-awaited offseason – those batteries need recharging!

As usual at Mermaid events, I loved and soaked up the festive, friendly atmosphere. More than a thousand women looking strong, fit, healthy and fabulous in one of the world’s most beautiful places. What more could I want?

Oh, and there is a Philz Coffee truck right near the finish area. Perfection!