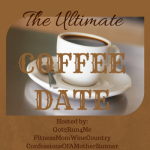 October???!? I guess I’ll be the eleventy-zillionth person in your blog or social feed to exclaim, How can it be October already?

But here we are, anyway: it’s the first Saturday of October, which means it’s time for the Ultimate Coffee Date hosted by Coco, Deborah and Lynda! So let’s grab an afternoon cup of coffee and chat!

If we were having coffee, I would tell you… that I am IN the 2016 Boston Marathon! Boy, did it come close… There was so much interest in the race this year, that time cutoff ended up 2:28 minutes below the official BQ standard for each age group. Which means that, with my 2:36 cushion, I squeaked in by 8 seconds. When you think that I could have lost that time at an aid station or walking for a bit, or with a porta-stop… I will never, ever again underestimate the importance of a second — or eight. A little confession, though: I ordered this Boston Qualifier tee from Adidas even before I knew for sure that I got in the race. I would have worn it with pride, regardless!

If we were having coffee, I would tell you… that last weekend I officially wrapped up my racing season. It went down in style, with a 3rd place overall finish at the See Jane Run triathlon. It felt hard and I was so, so tired and ready to cross that Finish line into the off-season! Now, I’m going to enjoy a few months of doing whatever the heck I want, just for fun! (As in, I will swim, bike and run with no purpose and agenda — just to meet with my tri-buds and because I love it!)

If we were having coffee, I would tell you… that I am running Ragnar Napa Valley this month, with Team Nuun! I am super-duper mega excited to run, ride, sleep (?) and repeat the beautiful 200 miles from San Francisco to Calistoga again, and with the support of a company whose product I love and use daily! Thank you, Nuun Hydration, for the opportunity, and I can’t wait to meet my van-mates and get going!

If we were having coffee, I would tell you… that I recently started reading Bowerman and the Men of Oregon: The Story of Oregon’s Legendary Coach and Nike’s Cofounder

. I’m late to the party – the book came out years ago – but it’s fascinating, especially the parts describing how Bowerman developed his training methods. And I haven’t even gotten to the part where he is making the prototype Nike flats out of rubber melted in his wife’s waffle maker!

If we were having coffee, I would tell you… my dirty little secret: I hate pumpkin spice latte! I really do! I’m not a huge fun of pumpkin-spice anything, really, other than actual pumpkin. My dentist a couple of years ago discovered this the hard way, by using pumpkin-flavor paste to clean my teeth, without asking first if that’s OK. I hope she knows better now!

What would you tell me if we were having coffee together?

[tweetthis]Let’s catch up over coffee! Join the #UltimateCoffeeDate and tell me: do you like PSL?[/tweetthis] 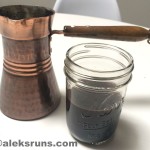 It recently came to my attention that on the first Saturday of the month, my fellow bloggers Coco, Deborah and Lynda are hosting monthly “Ultimate Coffee Date” linkups, where everyone gets together virtually to chit-chat about… you know, things we talk about when we meet friends for coffee. Go to any of their sites to see what everyone’s posting, it’s fun!

Now, anyone who knows me, knows that my blood type is Group C for Coffee, wherein about 75% of my blood is caffeine. (The rest is avocado…)

Needless to say, I join the Ultimate Coffee Date with the excitement of a kid showing up to elementary school on the first day of 1st grade! (But not this one… awwwwww!)

If we were having coffee… I would tell you that I am so happy to join you! I started blogging in 2012, but balancing family, full-time work, a crazy training schedule and a blog got too much after a couple of years, and the blog got the short end of the stick. Well, I recently made some changes to my work life, which give me more time to get back to blogging about running and triathlon. I am so excited about that!

If we were having coffee… I would tell you that this month, I get to find out if I made it into the Boston Marathon!!! I can’t wait for September 21, when I apply for registration. I hope that my 3:37:24 from the Santa Rosa Marathon is enough to get me in!

If we were having coffee… I would tell you that I only have one race left for this year, a sprint-distance triathlon on September 27. This will be my third time doing the See Jane Run Triathlon and I’m really hoping to beat my time from last year. But surprisingly, I am also a little bit burned out on racing. It’s been a busy year and I’m looking forward to taking some time off to recharge before the beginning of another race season in 2016!

That's right! ANY @seejane.run race in 2015 can be yours for 25% off!!! That's the half marathon in #SanFrancisco June 21, the half in #Seattle July 12, or the SJR women's tri & du in Pleasanton, CA on Sept 27! Use code SJRAMB236. Now go at it!! #seejanerun #ffcheckin #sweatpink #girlsgonesporty #runstagram #racediscounts

If we were having coffee… I would tell you that we are about to head out to a mini-Labor Day weekend vacation at a lake cabin, where I hear there is no internet or cell phone coverage whatsoever. I am a little worried about that!

[tweetthis]Have you ever survived four entire days in a remote location with no internet connection?[/tweetthis]

Happy Labor Day, Happy September, and talk to you soon! 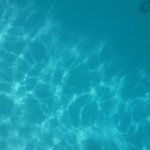 ; not sure how it escaped my attention, but I only read it a few months ago. It is now officially my favorite book about running and I am re-reading it.

It isn’t a page-turner, mind you. Sure, you could go through it in a day or two, but you are much more likely to read a few pages at a time, then close the book and think. (Think about you and your own history as a runner; think about what you think about when you run; just think.)

The quote above was one of the first things that made me think. When I was (much) younger, I was so jealous of people who could eat all of the food, especially junk food, and not gain a single pound. You know those people, right? Well, I’ve never been one of them – thank you, slow metabolism. Every piece of cake goes on the thighs, every chocolate bar sticks right to the butt.

I started running because I realized that it helped keep the pounds away: I could eat my candy and it wouldn’t end up on my six-pack. Then slowly, I began to like running. Then I began to love it. Then I realized, I couldn’t live without it!

Then I wanted to run faster and started thinking more about the kind of food I was eating. Then food became fuel, and calories became nutrition.

Then one day, I measured my resting heart rate, and it was 45. (I had to look up online whether that was OK. Turns out, it is quite normal for athletes. The heart is a muscle and when you use it a lot, it becomes stronger, pumping more blood with each beat.)

And I owe it to my slow metabolism!

So if you’re one of those people who feel like they have to work hard to maintain a healthy weight, repeat after me:

[tweetthis]Thank you, slow metabolism, for giving me a healthy lifestyle and a healthy body![/tweetthis]

, pick it up. It’s one of those books that make you want to lace up and jump out for a run!