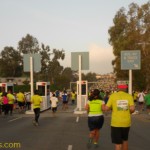 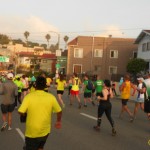 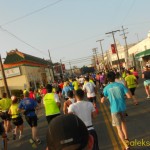 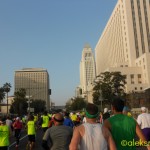 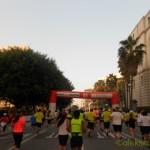 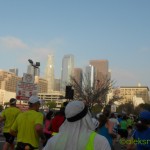 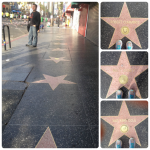 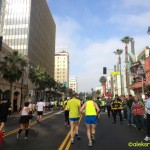 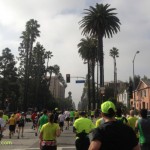 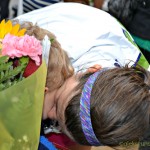 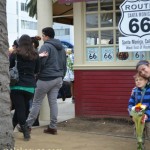 Before we jump on the LA Marathon course together, let me make one big disclaimer. This was (only?) my third marathon. I’m not one of these peeps who run a marathon a week, or even a month. [My legs think this is very wise.]

Also – key fact – the prior two times I did the 26.2 was in New York City. So technically, I only have one marathon to compare to LA, and it was a good one. A great one! Can any other race live up to the New York City Marathon? I have yet to find out.

That said, let’s talk about the LA Marathon race course, the amenities, the spectators, and everything else between miles 0 and 26.2:

One of the reasons I decided to do the LA Marathon was that I’d never really seen LA. Another: this beautiful elevation chart.

Ah, the amazing, long inclines. The few, if any, teeny little hills. Right?

Wrong! The climbs around miles 4 and 5 seemed brutal to me, and took a lot out early in the race. Prepare yourself with lots of hill work: I sure wish I’d done it when training for this one! Now let’s get running!

Minutes after the start: 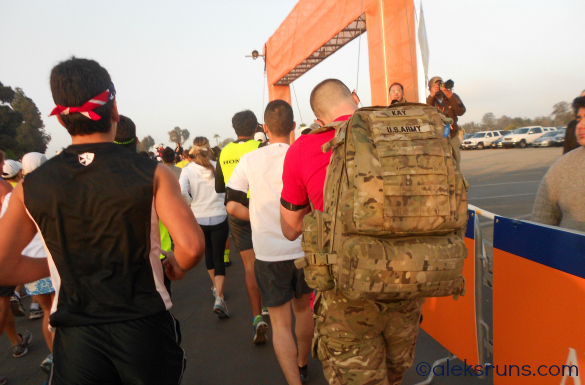 The first mile was a gentle downhill:

And before we knew it, we were running through Chinatown (is it called Chinatown in LA?): 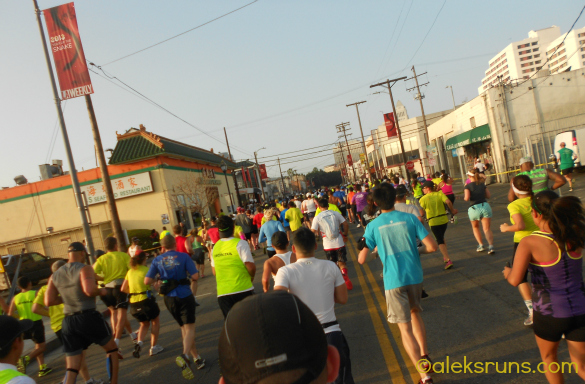 Then a neighborhood with taller buildings: 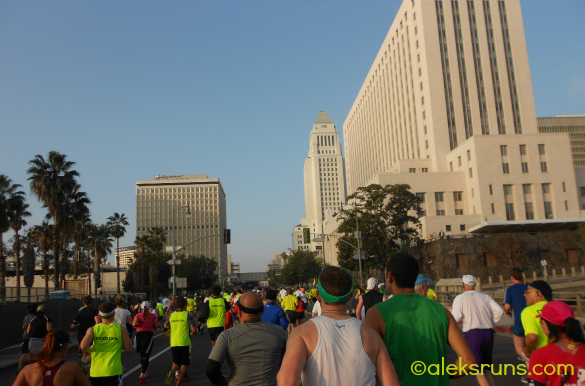 All this happened before Mile 3: 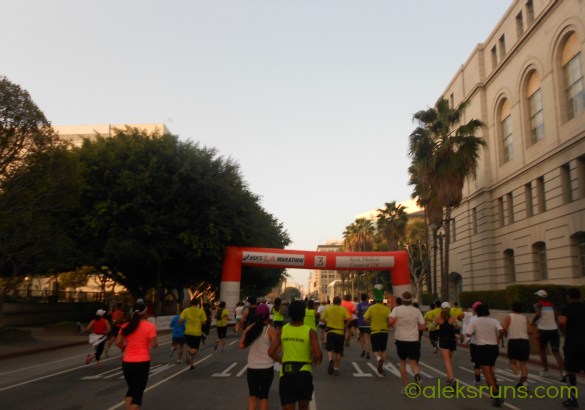 See all these neon-yellow Honda vests? They were worn by (mostly?) high-school and middle-school kids, some of them as young as 13 or 14! I spoke with a few of them – while waiting in line for the porta potties, of course, when else? – and they told me they trained for this since October. Those kids ran the full marathon. Way to go!

We came into full view of Downtown LA — is it Downtown LA? I’m not really sure, but I see skyscrapers, that’s what I think? 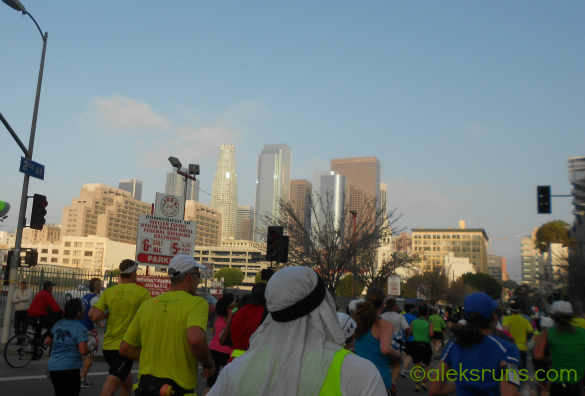 A while later, we hit Hollywood Blvd and I had the mighty brilliant idea to jump off course and take a gazillion photos of my shoes with “the stars”: 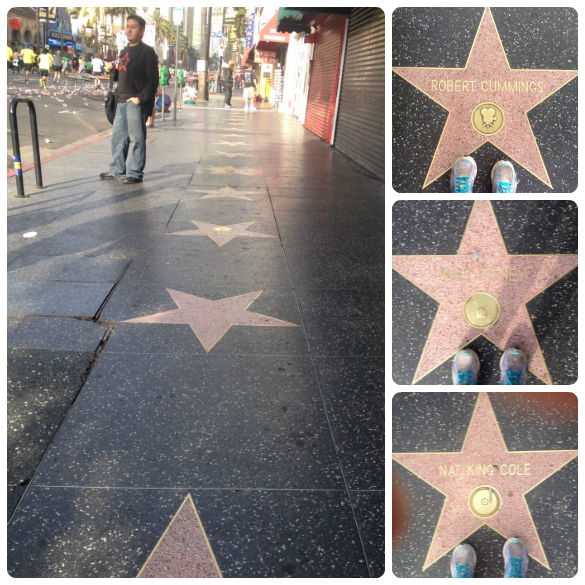 Five minutes [that cost me a PR] later, I remembered I came here to run, not play tourist: 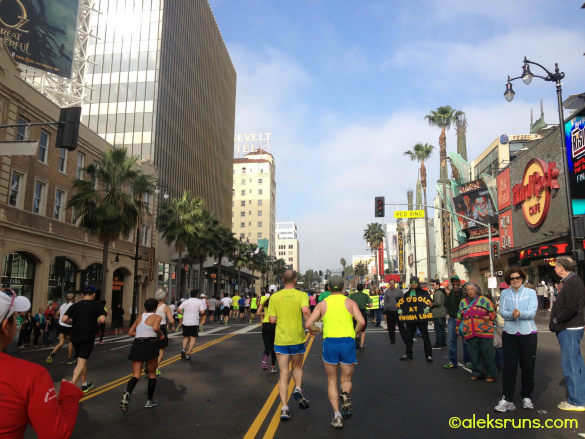 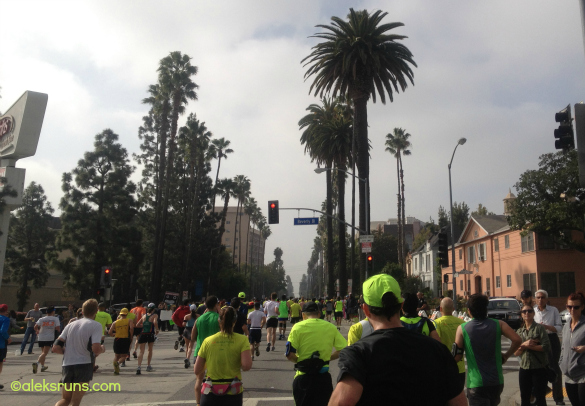 And, my favorite part: Rodeo Drive! 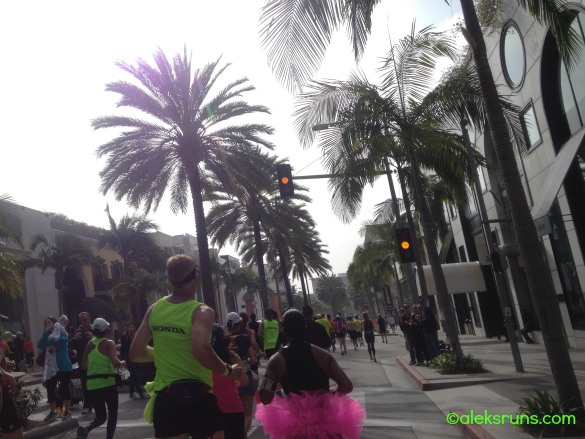 I lie, of course, my favorite part came about a mile after the Finish line, when I got to do this: 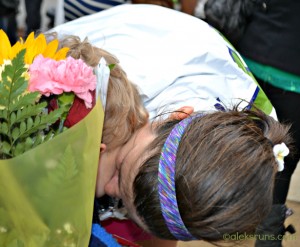 The hydration/ support situation was your usual – water at each mile; electrolytes at every other mile. Medical tents every three miles, more or less. There were lots of running clubs or just good samaritans on the course with water, Gatorade, pretzels, candy, Vaseline boards and other treats.

Heartfelt thanks to all of them, but especially:

Overall, my biggest regret is that I didn’t bring any salt packets. I sweat a lot when I run, and I’m a salty sweater. I also drink a lot of water – and during this race, I felt thirsty from the very beginning. I must have been plain dehydrated before I even started! I stopped to ask for salt at every single medical station and only one had some. [Tip: if you drink too much water during a long run, or your head begins to feel sort of dizzy, try a pinch of salt. Not salty drinks or gels, just plain salt. It does wonders and I really wish the LA Marathon folks had stocked all medical tents with lots and lots of it!]

And finally, because it’s been a while since I posted a photo, I’ll leave you with one last pic my mom snapped after the finish… of two strangers likely waiting to be reunited with a runner. Did I mention my mom takes awesome photos? 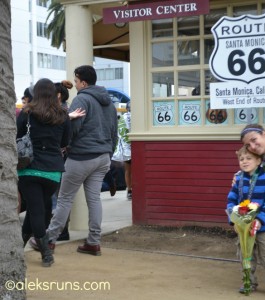 First post-marathon run. My quads still hurt a little, especially on downhills, but overall, I’m almost back to normal. Oh, and I wore my marathon shirt. Gosh darn, this thing really doesn’t match the rest of my running outfits. Or my face. Count yourself lucky I’m sparing you the photographic evidence.

In the evening, I biked to my local Road Runner Sports store for a Girls Night Out event.

And because this post is about the LA Marathon, after all, allow me to blow your mind: Eric Mose of Kenya won the LA Marathon, averaging a 4:57 minute-mile pace, for 26.2 miles. My average “pace” on this not even 6-mile long bike ride was 5:19. The dude runs faster than I bike, on my fast bike at that. How about that?