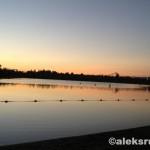 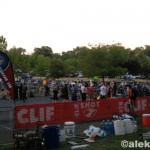 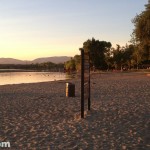 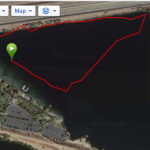 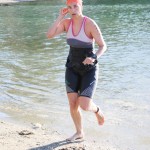 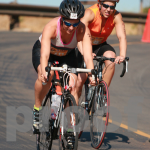 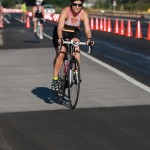 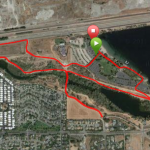 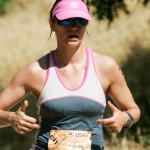 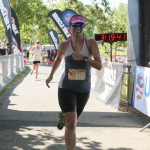 I don’t know about you, but I tend to obsess entirely too much about a race after it’s done. Study the results. Think about the course. What could I have done better? What was the best part? The worst?

CIT (California International Triathlon, for those of you thinking I just misspelled CIM) was no exception. I’ve had plenty of opportunity to reflect in the four days post race, and have thus far come up with several accurate – if questionably useful – descriptors for it:

Yes, I worried too much about the water in the days before the race. Yes, the water was just fine. Contrary to what some people told me, the bike course was NOT flat. (Why didn’t I look at the elevation chart?) The run was incredibly, excruciatingly, unbearably hot.

That said, it was all tremendous fun. It was my first Olympic distance triathlon – and my third triathlon in three months (also, ever).

But let’s start at the beginning. Here is my CIT story:

Pre-Race
Arrived shortly after 5:30 a.m., the sun was just rolling out from behind the lake where we would swim. Beautiful: 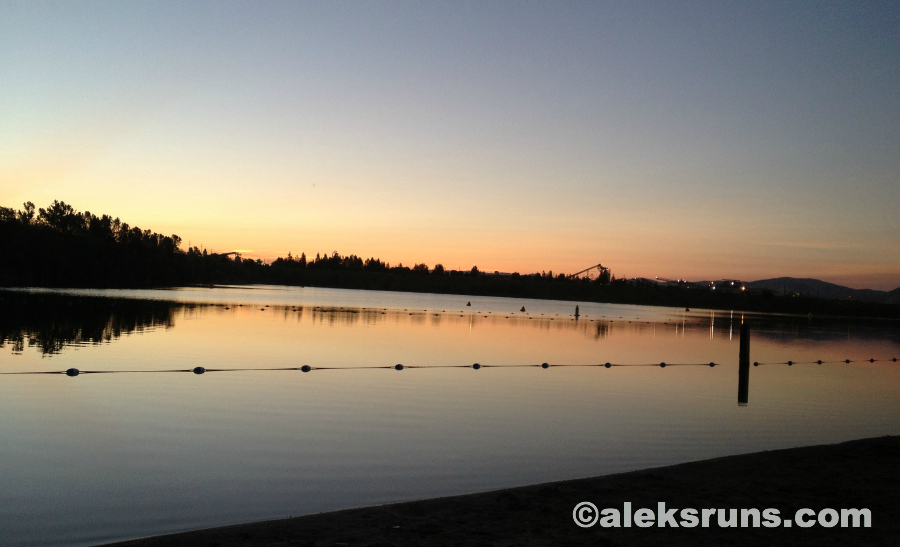 This is Shadow Cliffs lake, with a cool sandy beach on one side, where we would enter the water. One big advantage to the setup was that the transition area was immediately next to the large parking lot where we all parked. Super easy to walk the bike over and start setting up: 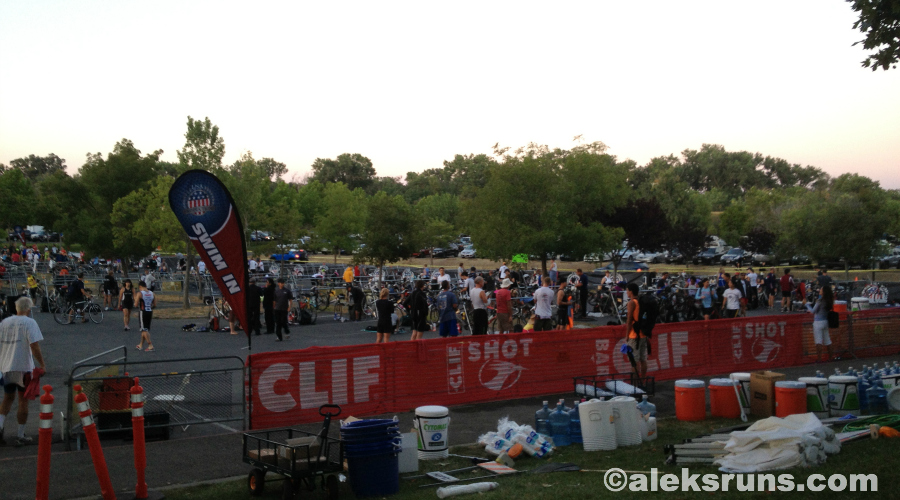 Another bonus? No porta-potties!! Instead, we used the beach bathrooms — actual bathrooms, which flushed and everything. Posh!

At 6 a.m., it was already 70 degrees and getting hotter by the minute. Better spray on some extra sunscreen! The organizers provided a stack of sunscreen spray bottles, too, to anyone who forgot theirs. Thoughtful!

I picked up my race packet (available on race morning; good thing, too, because pre-race packet pick up was in Pleasanton, an hour’s drive away). Then I set up my transition area (near the swim-in entrance, as usual) and started dawdling around with an hour to spare and not much to do, other go to the bathroom three times.

Body marking: check. One last walk to the beach: check. 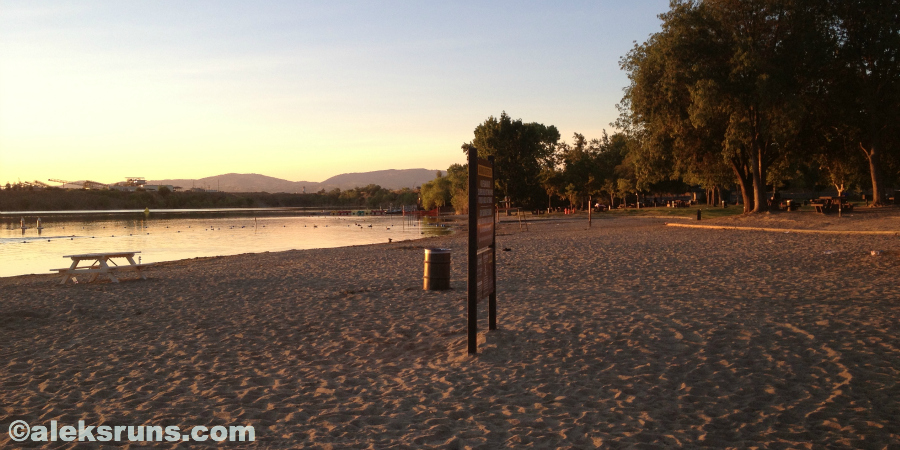 The race announcer told us the official water temperature was 77.1 degrees – wetsuit-legal – and everyone exhaled a collective sigh of relief.

I don’t get the whole love of wetsuits thing, as I’ve said before, I’d rather swim longer and not suffocate. So I joined the wetsuited crowd into the water, where we patiently waited for the sound of the starting gun — and I, of course, kept wondering how many poo germs and e-coli are in there. “Must not swallow any water. Oops, too late!”

As many poo germs and e-coli may have been in that lake, they were luckily invisible to the goggled eye. The water was warm, calm, my age group wave was relatively small and “beeeeeep!” — we were off!

As is becoming my habit, I started off to the side, so I wouldn’t get kicked, hit or crawled over. Success! Very uneventful swim altogether, except for a few things:

1. I kept swimming off course. That was possibly because I sighted not nearly often enough, but once I found my rhythm, I just wanted to keep going – not have to look up and mess it all up. My Garmin says I did this: 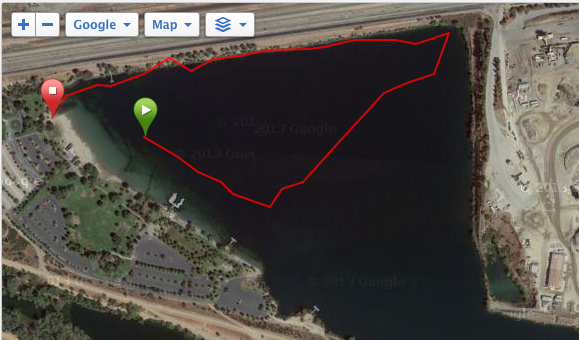 [Not that I took any walk breaks mid-swim :)]

2. The water did get pretty shallow as we were swimming along the shore in the last third or so of the swim — to the point where I could see the bottom and it was all covered with pointy lake-bottom plants. Grossed and slightly freaked out, I started closing my eyes when my head was under water so I wouldn’t look at them. “Please, merpeople, don’t grab my feet and drag me under!”

3. Like I’ve said many times, I’m a terrible swimmer. I started off with the orange caps (my wave), then got passed by the light blue caps (female 40+, started four minutes later), and then by the white caps (relay and aqua bike). Honestly, though? It was so nice and cool in the water, why not enjoy it a bit longer?

I kid. Promise I’ll try and get better at this swimming thing.

For now, I came out a good 8-10 minutes behind most in my wave, clearly not tired enough to manage giving the photographer a dirty look: 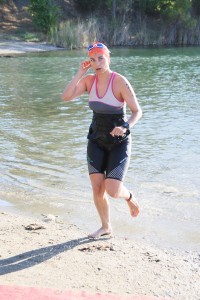 Transition would’ve been much faster if the wind hadn’t blown one of my socks off to the next bike rack over! I spent what seemed like forever looking for it, good thing I picked a bright (neon) green color for this race. [Note for next time, stick socks in bike shoes.]

I came to this one expecting a flat course. Yes, the elevation chart has one very pronounced climb:

But look at the numbers, a total elevation gain of 755 ft over 24.9 miles, that’s nothing!

There was one more climb after that, a 183-ft gain over 0.8 miles. It sounds like nothing now, but back then I had some very unladylike thoughts (possibly voiced out loud) about it! 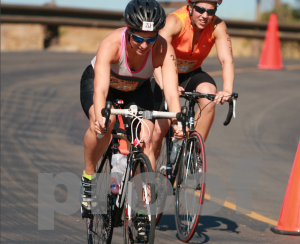 Here I am, passing someone near one of the many turns along the course. {Does my helmet looks ridiculous on my head or what???? More importantly, is it the helmet that’s weirdly shaped… or is it my head?} 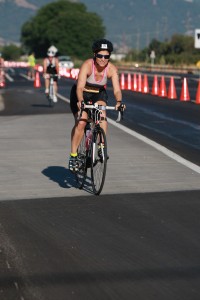 On the bright side, there were good stretches of flat, straight road that I used to drink and eat GU chomps: two bottles of liquid went down + a packet of chomps. With not much breakfast, the calories came in handy!

There really are only two words for this run: HOT! HILLY! The course was two loops of a strange 8-shape with one out-and-back thrown in. All while having to climb short, but steep enough hilly parts that had everyone around me walking. On 95%+ dirt roads with some trail mixed in.

I’m not even kidding: it never got boring! 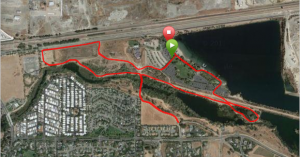 I started out too fast, my Garmin showed an 8:45 pace… in this heat, no way. But I figured I’d wait until my legs slowed down naturally, and they did soon enough. It was so hot out, by the time I reached the first water station my clothes were completely dry. (Remember, I’d been swimming just an hour and a half earlier.)

That was quickly rectified at the water station – and at each one that followed further out. Thankfully, the hydration stations were less than a mile apart. I was grabbing two cups of water to throw down my head and back, then one more to drink. 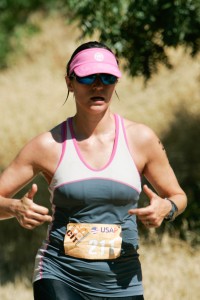 How do I look?

I can’t really tell you if the course was scenic or not, I wasted no energy looking around. Eyes ahead, breathe in and out, one-two, one-two, one-two. Kind of a bummer running past the finish line, to the sound of wild cheers for those wrapping up their triathlon (in 2 hours 30 minutes, no less!!) – but I told myself I’m just toughening up my mental game.

One more awkwardly shaped loop on dirt and trail with multiple climbs and walk breaks, and I crossed the finish line myself: 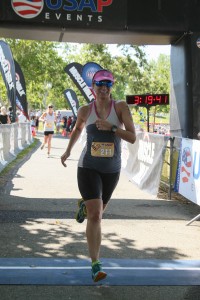 Happy grin at the clock! Because this was my first Olympic-distance race, I really had no idea what to expect time-wise. I was hoping to come in under four hours… but really hoping for under 3:30. I had calculated a best-case scenario of 3:20, based off of my times (speed, pace) at Uvas; then scaled it back to 3:30 when the heat wave hit.

So when I saw the clock at 3:19 (and quickly subtracted 12 minutes for my wave start), I was more than happy! 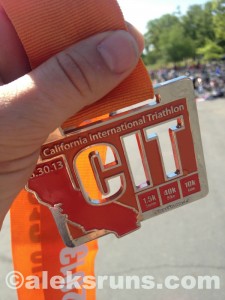 6 thoughts on “Wait, It Was Supposed to be Flat! California International Triathlon Recap”