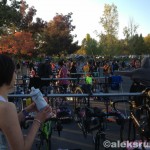 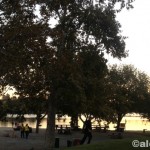 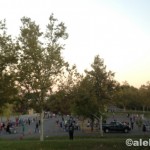 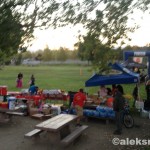 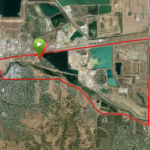 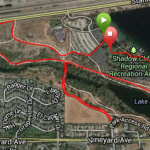 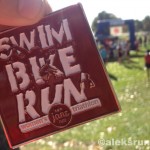 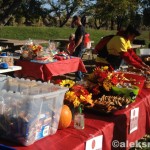 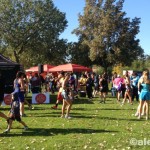 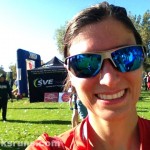 The See Jane Run Triathlon is a textbook perfect race for first-timers: it’s short and sweet. The lake water is warm; the bike course is fast and flat, and the run is… not so bad, if you like dirt roads and some inclines. 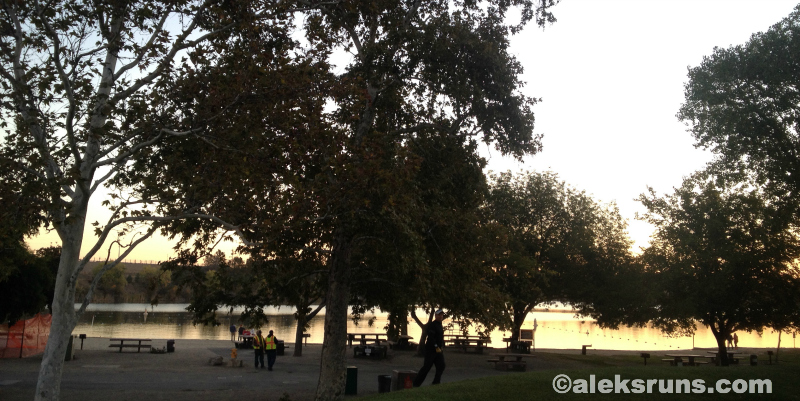 It’s a women-only race and the atmosphere is friendly, fun and relaxed. Really, it’s more about the laughs and making new friends than the competition. 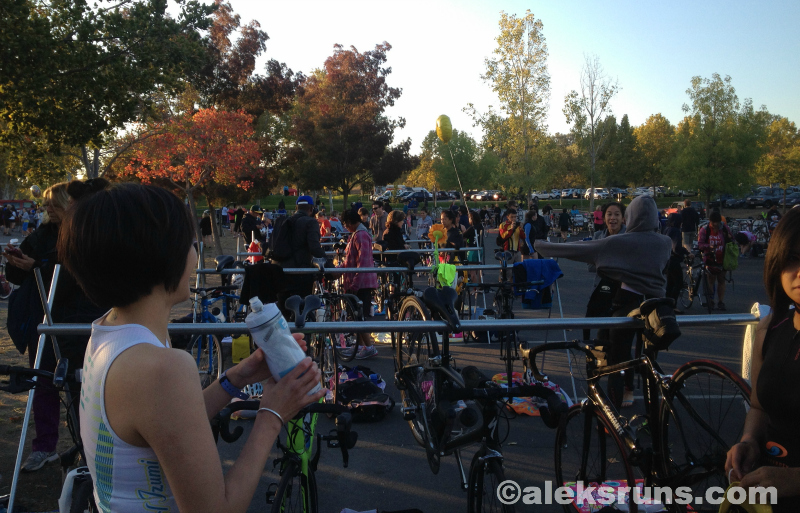 I had a fab race out there today, if a little bittersweet. It was the last race of my first triathlon season. That only comes once, right?

The day started like most other: 5 a.m. alarm, drive in the dark, dash from parking to bathrooms (first visit of several). And yes: the best part of triathloning at Shadow Cliffs Regional Park is using actual bathrooms, not porta potties. Livin’ it up!

I racked my bike close to the Swim-in and Bike-out areas, then ran up a little hill to the registration tent/ Finish area to get my race bib. I must’ve been one of the early birds; there was no line at registration, and not that many people in transition yet: 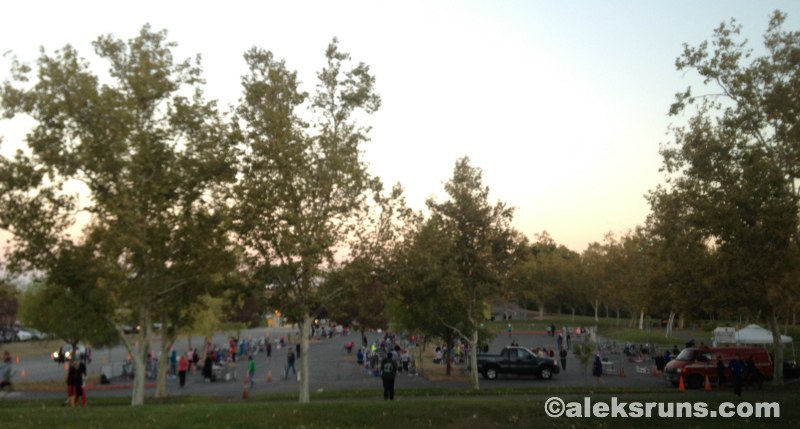 It was a chilly morning, too. Brrr! 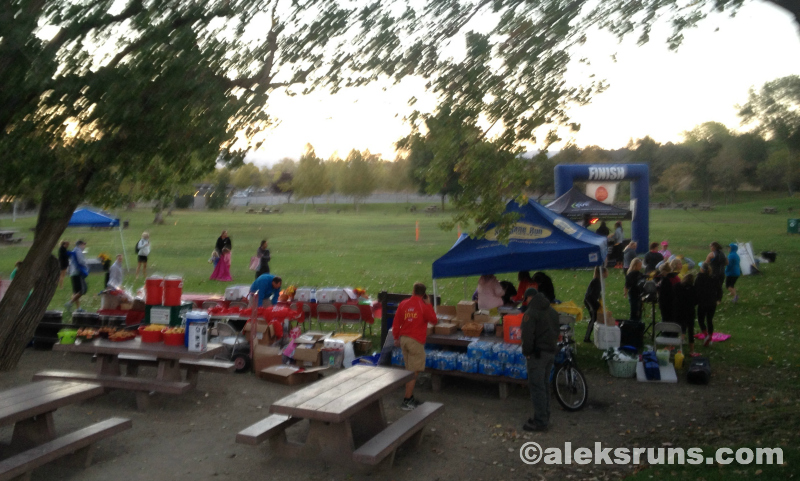 Once I arranged my transition area and pinned my bib to my race belt (skirt), I realized I had nearly an hour to kill before my wave start. Not a problem! I quickly made friends with the lady next to me, Jenny, and we spent the entire time chatting about races and injuries, you know: typical triathlon/ running stuff.

Soon, we suited up and headed towards the beach. (I went with my swim skin

this time, though in hindsight I could’ve left that at home, too. The water was super warm and for this short a swim, any time gained with a wetsuit would’ve been lost taking it off in T1.)

The Swim
I knew what to expect, thanks to the California International Tri I did earlier this year. The water was super warm – warmer than the air! – and calm, of course, this being a lake the size of a football field. (I just made that up, it’s probably bigger than that… but still. A tiny lake.)

We had a beach start: you wait with your wave on the beach, then at the start whistle, run and jump in. It was different from the ocean beach start, though, where the water gets deep almost right away. My first strokes here, I was grabbing at sand from the bottom.

And yes, we did come this close to shore right before the last left turn back! Before I knew it, I touched sand again and it was time to get up and run back to transition.

Swim time: 10:10 for 400 yards
(Very slow. Many women got that in just six or seven minutes!)
T1: Nothing special, the swimskin unzipped easily and I was out of it almost entirely by the time I reached my bike. Time: 2:15.

The Bike
This isn’t the most scenic bike course you’ll ride, but it has lots of other things going for it — not least of all the long stretches of straight road. You can let ‘er rip and have some real fun out there: 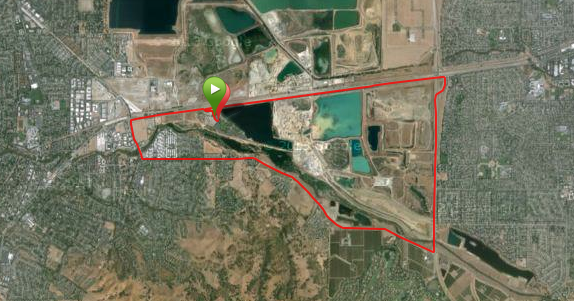 The entire section along Stanley Blvd was closed to traffic going in our direction, which was amazing. I felt so much safer riding and passing other cyclists, knowing I don’t have to constantly look over my shoulder for coming cars.

It’s also a loop course, which meant very few turns and not one U-turn at all. Big plus!

And finally, it was as flat as it gets. Some may take this as a downside, though: I personally find rolling hills easier because you can take short breaks on the downhills. But with just 8.3 miles to ride, this flat course felt easy on the legs — and over in the blink of an eye.

Bike time: 27:51
Avg speed: 17.9 mph (OK, I could’ve probably gone faster there…)
T2: Nothing interesting to report, except I couldn’t find my rack for a while. Changed into shoes and put on race belt and was off. Time: 1:29

The Run
Let’s not sugarcoat it, this run course ain’t the easiest out there. It’s almost all dirt paths, except the short paved stretch along Stanley Blvd in the very beginning — that was actually lots of fun, with women still on the bike cheering us on, and vice versa.

I had done this course before, at CIT — you might even say “twice” because the 10K distance had been two loops of that thing. And I say “thing” because there is really no name for the shape of it:

A butterfly? An eight with a tail? A bow?

So yes, it’s a challenging and somewhat confusing course. One spot lacked volunteers and we had no idea what to do — turned out that we had to make a U-turn and head back. There was just one water station, too — I’d have been much happier with an opportunity to get a drink after the first mile or so.

Luckily, the weather cooperated – sunny, but not hot – and let’s face it, it was just three miles! Before I knew it, I saw and heard the Finish line, and it was time to book a few final “fast” yards on the grass. And done!

No excuses, though. It was fun, it was short – but still challenging; it was the perfect way to wrap up triathlon season 2013!

I stuck around for a bit after that, had a few pieces of banana and some water from the wonderful Fall-themed spread:

Looked for Jenny, but couldn’t find her (hope she had a great race!): 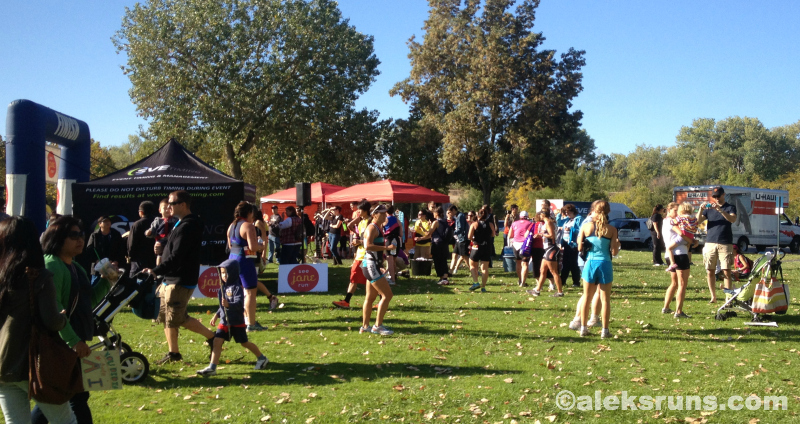 And finally walked over to check the results and found out that, with a time of 1:07:53, I’d come in 3rd in my age group!

The challenge? To do better next year! Until then: 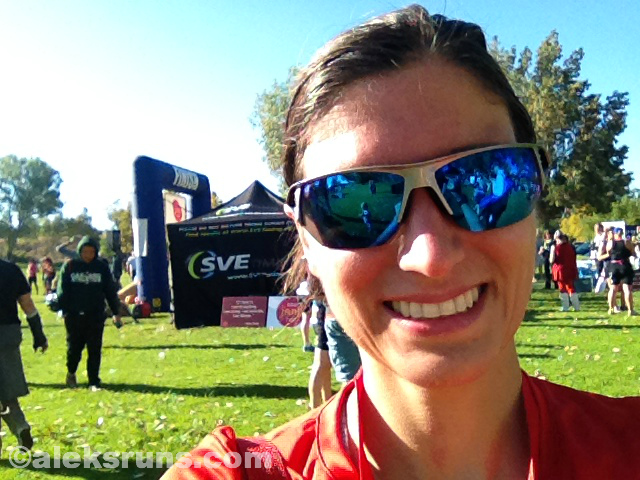 (Or, if you’re running Rock’n Roll San Jose this year, see you mañana!)