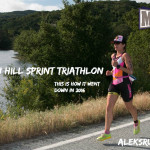 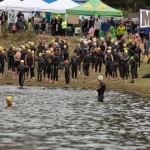 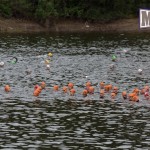 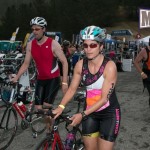 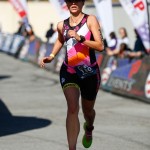 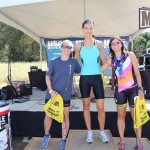 On May 15, I raced the Morgan Hill Sprint Triathlon. It isn’t really what I’d call a sprint-distance race, since each of the tree legs is a bit longer: 3/4-mile swim, 16-mile bike, and 5-mile run. It was my first triathlon of the year — and I was undertrained.

I had only had three weeks of swimming and riding (I had racked my bike and stayed out of the pool in the months leading up to the Boston Marathon), so I knew I wouldn’t be 100% race-ready for this one. Heck, I would’t be 80% ready.

Yet, I’d been looking forward to the race for months. MHST would be my Boston victory lap: a beautiful morning out with friends (no fewer than eight of my training buddies did this one) and a morning of swim-bike-run fun on the roads where we often train.

I was planning to pick up my race packet on race morning, but on Saturday, I made the impulse decision to drive over to packet pickup at the Sports Basement in Sunnyvale. I needed to buy a new race belt, anyway.

That was the last smart decision I made that day. Later that night, as my mind was drifting off into lala land, I thought: Hey, I bet it would be totally cool if I slept in a little tomorrow. And so I changed the alarm, from 4:30 a.m. to 5.

Indeed, it was — until I hit a traffic jam about three miles down the road from transition. It turned out that the designated parking lot had filled up and late arrivals like me were stuck in a bumper-to-bumper nightmare, moving at 3 mph. People were parking off the road and riding to transition, speeding by those of us who decided to wait it out and park safely. An aggravating 40 minutes later, I was out of the car and riding to the start myself.

It was 6:40 a.m. when I finally arrived at the bike racks and found my friends. The race announcer was already rushing everyone onto the water start and I was just beginning to set everything up!

Never mind, at least I’ve done this before. Rack bike, lay down towel, bike shoes-helmet-sunglasses to the left, running shoes-race belt-visor to the right. Dump two Nuun tablets and two Nuun Plus in water bottle, fizz out, close. Squeeze into wetsuit, grab swim cap and goggles. Snap quick pic with team. No time to pee! That’s OK, we’ll do it in the water.

My swim was as expected: blah. I tried as hard as I could to focus on good form, push the water, fast arm turnover… In reality, I would find myself wildly off course any time I sighted, and I could swear the reservoir water was choppy. Good thing it’s supposed to be safe to drink. Before I could find a rhythm, the swim was done.

My swim time, 25:19, was the slowest of all top 20 female finishers. At the time, I didn’t know how slow (or fast) this was, but as usual, by the time I got back to my rack, most of the bikes were gone.

Transition was a fairly quick (for me) 1:42: socks, shoes, grab Magic Bike and go. We’ve got some chasing to do. 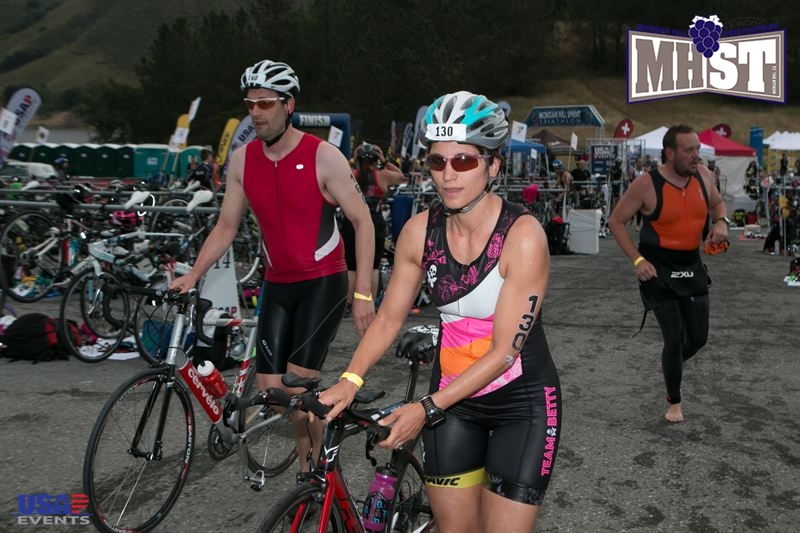 I had decided that no matter how undertrained I was bike-wise, I’d go as hard as I could. And if I blew up on the run, so be it.

So I pushed. The course is hilly and my legs burned the entire time, but I’d biked these roads before and had a good idea of the ups and downs my body and mind were about to experience. 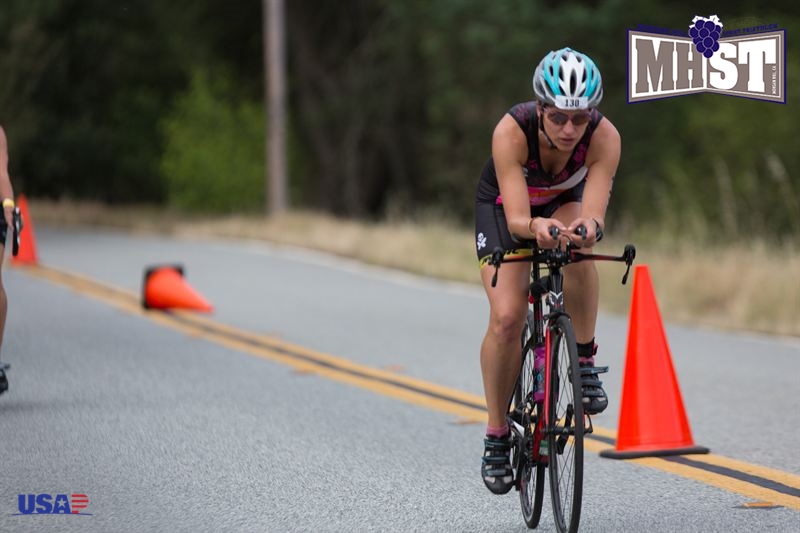 It’s a beautiful course, by the way, if you live in the area and haven’t done this race, you should. At least, come out and ride those roads. Enjoy the full reservoirs – thanks El Nino! – and gentle rolling hills, and challenge yourself on the short, but lung-busting climb up Sycamore road.

I wonder how much faster I could take this course if I trained better, with hill repeats and at least three months – not three weeks – of riding consistently. Maybe I’ll find out next year.

Ran into transition, jumped into my running shoes. T2 time: 1:08.

Time to go balls out. My feet were cold and each foot strike felt awkward, but at least my legs were there. The MHST run covers the first 2.5 miles of the bike course, then you turn around and head back towards the finish. It’s all gentle rollers, but nothing really hilly. 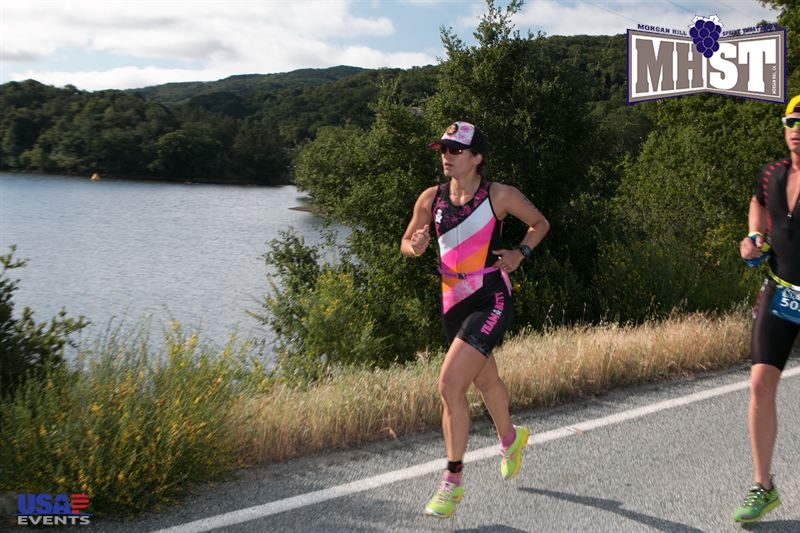 I covered the first two miles at a 7:30 pace, wishing with all my heart that I could go faster than that, but couldn’t. My legs were fine — my lungs were not. I guess that’s what four months of marathon training does to you: you get the endurance, but lose your speed.

I was especially concerned to be running this pace on what seemed like an incline and kept thinking of the fight I’d need to put on the way back to avoid a walk of shame up the hill. Except something weird happened after the turnaround: running got easier. The gentle climb I expected never came. My pace went down to 7:07 for mile 4. I passed some people, then a woman who was in my age group.

Then I immediately thought, shit. I have a mile to go, and she’ll catch me. Must not let that happen. Must. Not. Grunt. Inner scream. At least, we were still running downhill. Pace for mile 5 on my watch was 7:03. 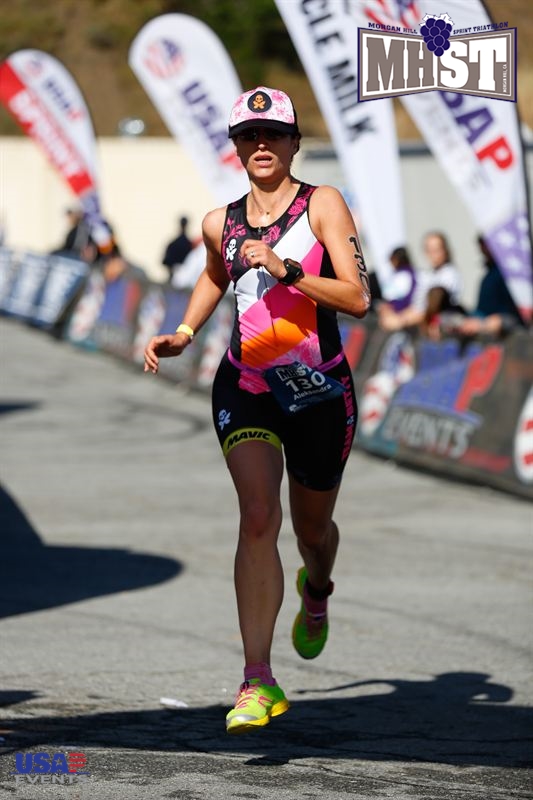 I crossed the finish line just as my lungs were about to explode, with 1:59-something on the clock. My wave started 4 minutes behind, so I calculated that I’d gotten just under 1:55. Well, this was my first time doing this race, so I had no clue what that meant. Whatever, I just wanted to catch my breath and get some water.

After that, I went back out on the run course to cheer on the rest of the team — then headed back to the finish area to get food and beer. After a hard race, beer is the best!

So is checking the results and finding out you placed! I got 2nd in my age group, a good 8 minutes behind the first crazy-speedy lady. I can only dream to be so fast one day!

What a great way to open triathlon season. (Oh, and guess what was in my prize pack: a race belt. So now I have a spare.)

Here’s to a new tri season, having fun and kicking butt!