A couple of years ago, I had the following conversation with a coworker:

Coworker: How’s it going?
Me: Good, good. Busy. You?
Coworker: Oh, I’m good. I ran a marathon this weekend so I’ve been sore for the past few days, but I’m doing better already.
Me: A marathon? How did I not know you were training for a marathon?
Coworker: Oh, I didn’t. A buddy called me on Saturday, asking if I wanted to do the San Francisco half marathon with him. So I said, sure. But I felt really good at the end of the half, so I just decided to keep going and do the whole thing.

[Now, this guy was fitness-obsessed. We’d run into each other in the corporate gym more often than anywhere else in that office. He also knew that I was a runner and would be genuinely interested to hear that story, so I honestly think he wasn’t showing off.]

Me: [Collects jaw from floor] You ran a marathon without even training?
Coworker: Yeah… it got pretty miserable there after mile 20.
Me: Er, no kidding… What was your time?
Coworker: A little over 4 hours.
Me, in my head: Aaagh, you lucky bastard, do you know how much I have to train to even dream of running a marathon in four? Dropkicks in frustration and turns permanently green with envy.

So anyway, we kept talking for a while, about marathon training programs and such stuff that we, mortals, have to endure in order to run and finish one. We also collectively wondered which is worse: training for four to six months and possibly getting a whole slew of injuries, but enjoying your race and finishing strong… or winging it and enduring the worst couple of hours in your life and barely making it to the finish line? What causes worse damage to your body: months of pounding the pavement in order to build up to a strong 26.2, or putting your body through 26.2, unprepared?

I’ll take the former any time, but I have to confess that when it comes to winging a race, I’m not entirely innocent. Before the San Jose Rock’n’Roll 1/2 Marathon in October 2010, the longest I had run for nearly two and a half years had been 4.5 miles. I don’t know what I was thinking, maybe that my leg muscles would magically regrow during the first 4.5 and carry me an extra 8.6? (I had, actually, been working out with a personal trainer. Ah, that was one awesome corporate discount. But she couldn’t sneak in a few eight-to-12 milers during our 30-minute sessions, now, could she?)

Back to San Jose, things were actually OK until around mile 8. After that I don’t remember much. I know I stopped and walked — you’d think those last five miles wouldn’t be a blur at the speed I was going, but they are.

I hung that medal in my Rock’n’Roll Half Marathon Hall of Shame (figuratively speaking; in reality, it lives in the same box as all the others and hardly ever sees the light of day). And I swore to never again wing it.

After all, don’t we pay to run races and have a good time doing it?

Speaking of winging it, I had promised myself to lay off running for the three weeks after the Giant Race half on September 16 and before the San Jose Rock’n’Roll half on October 7. Clearly, that didn’t happen as planned. Because:

Still, no long runs or speed training since that 13.1 two weeks ago. Next Sunday should be interesting. 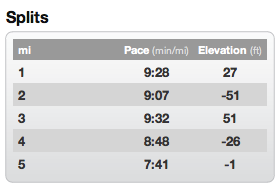 One thought on “Winging It”