Five years ago, I sat in my newly-appointed OB’s office and nearly cried as he informed me that being six weeks pregnant meant Absolutely No Running the New York City Marathon in 10 days. No matter that I had trained for it all summer. No matter the three 20-mile long runs under my belt and the weekly track sessions that were supposed to help me run an under-4.

I was looking forward to motherhood. But sob. Would it change running? Forever?

And so for the next three years, it did. Lack of sleep was exhausting. Raising an overly active baby – and then toddler – while working full time was all-consuming. There was no time to train! Hardly any time to run! The few four-mile races I signed up for, I did mostly as an excuse to watch our son do the kids’ runs afterwards. (Too cute!)

All those excuses were later used to justify running a half marathon with no training, then sleeping through the alarm for the next one. I needed a kick in the buttocks like I need those first three cups of coffee in the morning. 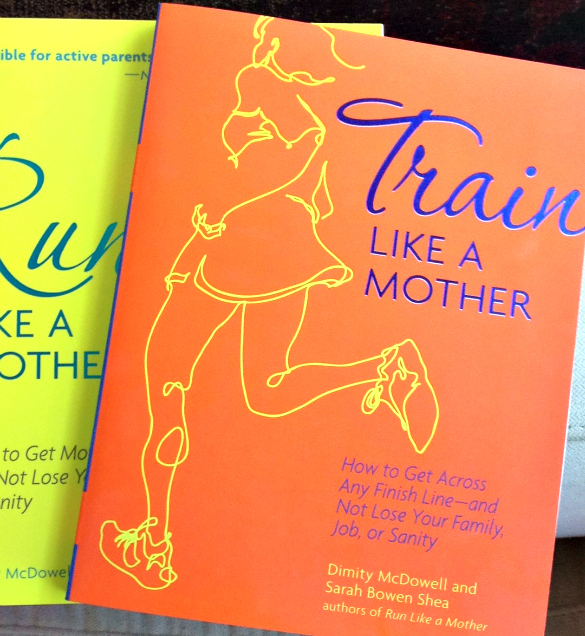 That kick came earlier this year, courtesy of those two books: Run Like a Mother

. I don’t remember how I found them, but as soon as I looked over the reviews and peeked at the first pages, I was sold.

The books are funny, inspirational, practical and hold nothing back. Want to know about potty logistics pre-race? Nipple chafing? Periods, pregnancy, post-partum pains? Weight issues? It’s all in there — and if I gave myself a dollar for every time I thought “Ha! You too?” while reading, I’d have enough for a new pair of running shoes, full price.

But what really got me excited (and butt-kicked) were the training plans in Train Like a Mother. Specifically, the Half-Marathon: Own It one, which I promptly annotated with dates, then transferred to the family wall calendar, and followed religiously all summer. The result: from a 2:10 half marathon in March 2012 to a personal best of 1:58:58 at the San Jose Rock’n’Roll half! I am now officially as fast as I was eight years ago: pre-child, when all I had to plan, it seemed, was where to do happy hour that day.

Now, without giving away the details — because, truly, $10.19 is too small a price to pay for this book and you should head over to Amazon

and buy it for yourself, your friend, mother, sister, girlfriend or wife, right now — let me tell you about the Half Marathon: Own It plan.

It’s challenging. But it’s also never boring. As most training programs, it has one long run a week, two easy runs and at least one rest day. There is also at least one speed or hill workout a week and a tempo run or – fun! – negative splits. There are even a couple of “fun” workouts scheduled, which can be anything from bike riding or dodgeball, to dance class or ice skating. (Sorry, ladies, I refuse to do aqua aerobics. Not before I have my AARP card in my hands.)

As usual, you progress from shorter to longer long runs, starting at 8 and peaking at 15 miles for the half. The intensity of speed, hill and tempo runs gets progressively higher. The track workouts are never the same week to week, so you always have something to look forward to. (After a 5+ year hiatus, the first time I set foot on the track this summer and felt the rubbery surface give extra jump to my stride, I nearly cried with joy. I am never staying away from the track that long again. Never.)

If you want to get a better idea of what the TLAM training plans look like, you can actually get their Half Marathon: Finish It plan here, free like the wind. And be sure to read more about their training plans (nine altogether) here.

Mother runners, it turns out, are a tribe. A big, ever-growing, all-supportive, funny and understanding community — and you know what, I bet father runners are equally welcome.